You are here: Home / Film Reviews / The Greatest Showman 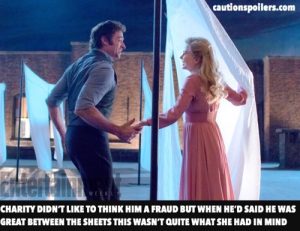 The Greatest Showman is historically inaccurate and hugely emotionally manipulative in a by-numbers way, and I could almost feel my heartstrings being tugged as I sat in the cinema; but if you take it at face value, it’s an engaging and at times moving musical.

I just wish that they had simply made up their own story; or filmed a more accurate version of PT Barnum, who achieved extraordinary things in business at a young age but was less a champion of diversity and more a racist of-his-time exploiter, at one point exhibiting a disabled African American child in a cage.

Phineas Taylor Barnum (Hugh Jackman) has been in love with Charity (Michelle Williams) since they were children and he visited her wealthy family with his tailor father. Despite her parents’ objections they marry, and she really is extraordinarily supportive of her husband. So when Barnum’s employer goers bankrupt and he takes the chance to do something different, the whole family pitch in to try to make it a success.

But Barnum doesn’t entirely understand the public yet: “people don’t want to admit it, but they’re fascinated by the macabre” he says, but his waxwork museum is a flop. One daughter helpfully explains that his museum contains too many dead things, while the other tells him he needs “something that isn’t stuffed”.

After this failure, the irrepressible impresario fly-posts the city, looking for “unique persons and curiosities” for a new show. From giants to conjoined twins, they line up in search of work and a home. He also goes looking himself, finding bearded lady and talented singer Lettie Lutz (Keala Settle) hiding behind the sheets in a laundry.

For Barnum no publicity is bad publicity, and he uses a particularly harsh review (“a primitive circus of humbug” the writer calls Barnum’s show) to his advantage, offering cheap tickets to anyone bringing the offending newspaper article.

Much is made of this humbug, and of Barnum the fraudster. While the real life Barnum was, the film doesn’t really support this. He exaggerates, certainly – the Irish Giant is Eastern European; the World’s Heaviest Man is lighter than suggested. But his performers are not, in the main, fake (a giant is a giant, wherever he is from).

Barnum isn’t entirely sanitised for a 21st century audience; throughout, he is both supportive of his acts while also exploiting them. “People aren’t going to like it if you put us on the stage” says African American trapeze artist W D Wheeler (Yahya Abdul-Mateen II) during his interview for a job in Barnum’s show. “Oh I’m counting on it!” replies Barnum cheerfully.

The diminutive Charles Stratton (Sam Humphry) initially refuses to take part, knowing he’ll be laughed at, and Barnum’s response is a rather thoughtless “they’re laughing at you anyway, you might as well get paid”.

If Barnum is selling what he sees as the macabre, those people from whom society turns away while still sneaking endless peeks, Philip Carlyle (Zac Efron), the wealthy and handsome playwright who soon becomes his business partner, is “selling virtue” and never has to hustle to offload tickets to his plays.

Carlyle has contacts, and even gets Barnum an audience with Queen Victoria, though I wasn’t convinced it was her as she wasn’t played by Judi Dench.

It’s at Buckingham Palace that Barnum first meets the singer Jenny Lind (Rebecca Ferguson), famous throughout Europe but unknown in America. With his circus now packing in the crowds he decides to bring Lind to New York.

And it is on her opening night that his real brand of humbug becomes apparent, happy to literally shut the door in the face of Lettie and the others when he and his newest protege are mixing with the city’s finest. Yet despite this treatment, the performers never really hold him to account.

The movie tries to position Barnum as a man from the wrong side of the tracks, championing the unloved and the different (at his most poverty-stricken, the orphaned Phineas is given an apple by a disfigured stranger). But ultimately what Barnum is doing isn’t new or motivated by morality. He’s a man who craves acceptance, using his new wealth to take a huge house on a long lease and send his talented daughter to ballet classes.

While Barnum wants respectability, Carlyle is not quite as keen to give up his, when his developing relationship with trapeze artist Anne Wheeler (Zendaya) shocks his family.

The Greatest Showman is an enjoyably traditional film that follows that well-worn path of success in the face of society’s opposition, hubris, and near-disaster. Plus wealthy people happily ignoring their own privilege as they mingle with “the other”, while retaining the option to retreat right back into that privilege.

Like many films set in Victorian times it is remarkably clean and stylised, particularly during the musical numbers (I’d enjoy doing laundry a lot more if the drying sheets swirled about me like a  perfectly timed chorus line as I broke into song).

There’s the odd minor shock – Barnum pronounces “hyperbole” properly, something I’ve rarely heard since my wonderful English teacher wafted in to our classroom back in the mid 80s, scarfs flying behind her, making us repeat clearly “hi-PERR-bul-ee”.

Lind is underwritten, and her flirtation with Barnum doesn’t go anywhere while still creating aftershocks. Zendaya is very good – Anne lets herself fall for Carlyle against her better judgement, so she’s not at all surprised by his behaviour (also, I now want a pink wig).

Of the circus performers only Lettie, Charles and Anne have much to do (Settle’s passion and drive as Lettie propels all the musical numbers she’s in). More of Anne’s brother WD Wheeler would have been welcome.

And Jackman? He has tremendous presence and is himself an eminently watchable showman. What depth there is to Barnum he maximises, but he would also have been perfectly capable of portraying the real Barnum with all his horrible flaws (though whether such a film would have got funding is a moot point).