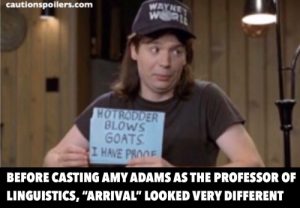 Can it really be 25 years since Wayne’s World was released?

In some ways at my age it’s easier to remember what happened 25 years ago than what I had for breakfast this morning (until I remember that I’ve forgotten I don’t eat breakfast) but I was still staggered how many of the words and phrases from Wayne’s World have become common parlance.

Hugely influential, I don’t quite know what we all actually said before it came along to add new word usages and phrases to the proud and ancient English language. Not since Shakespeare invented the word hobnob, and so paved the way for one of the UK’s favourite oaty biscuits, has anyone added quite so much to our beloved lexicon.

Before Waynes’s World, teenagers were silent, taciturn, and annoying. After Wayne’s World they never bloody shut up and were even more annoying. (I know, I was one).

I am also willing to bet that it has added more to the language than even (and I know people will want to kill me for this, but you know, don’t bother as I’m already dead and have been since admitting that I’ve never seen Ferris Bueller’s Day Off) the Bill & Ted films. And you know how much I love Bill & Ted. Well, Ted anyway. Here are some of Wayne’s World’s most influential sayings:

Okay, those last three were from The Fast Show.

There is a semblance of a plot in Wayne’s World, not that it matters if you just want to watch it to quote it. Wayne (Mike Myers) and Garth (Dana Carvey) produce a public access TV show from Wayne’s parents’ basement, which is super-popular among local kids (the show not his parents’ basement). Sleazy TV producer Benjamin Oliver (Rob Lowe) is introduced to the show by Ione Skye (whatever happened to her? Adds “Say Anything” to my re-watch list), his girlfriend of the moment (a moment is pretty much the longest a girl gets to be Benjamin’s girlfriend).

Benjamin manages to buy the show for $10,000. Meanwhile the boys head to a night club and see Crucial Taunt playing – Wayne falls for lead singer Cassandra Wong (Tia Carrere) while trying to avoid his stalker ex-girlfriend Stacy (Lara Flynn Boyle). Wayne also turns out to be fluent in Cantonese which impresses Cassandra, and they start a relationship.

But Benjamin wants Cassandra too and is – sadly for Wayne – also impressively fluent in Cantonese. He also wants Cassandra to be in a music video and when Wayne tries to prevent her taking part, she leaves him. Additionally, the new responsibilities that accompany the new version of their TV show are hard for the boys to get used to, and when interviewing their sponsor Noah Vanderhoff Wayne insults him with rude messages written on the back of his prompt cards. Will Cassandra and Wayne rekindle their love? And can the integrity of the show be maintained?

Director Penelope Spheeris perfectly captures the sheer exuberance of Wayne and Garth. Mike Myers and Dana Carvey do look pretty old, but it doesn’t matter though as they are still just loveable metalheads. And Wayne’s punching way above his weight in his relationship with Cassandra is proof that women really do want someone who can make them laugh (and speak fluent Cantonese). Tia Carrere is great – I haven’t seen her in much since but she’s terrific in this with great comic timing (and of course a killer bod which I would have been envious of 25 years ago let alone now).

Rob Lowe looks like an actual android in this movie, the kind that is regularly oiled to keep it going. In fact he’s so oily his Filofax has a reminder in it to remember to exploit Wayne and Garth. (Yes has a Filofax! Kids, a Filofax was a large loose-leaf diary with all important dates downloaded from your smartphone onto it. The size of an IBM computer, your Filofax was probably the largest thing you owned and certainly the most expensive).

One thing I had forgotten was how good looking Wayne and Garth’s film team were – and they were kept behind the camera. No Long Haired Sexy Film Blokes! DENIED!

There are also two endings (DOUBLE SPOILER), though none of that is really important.

Not all of the Wayne’s World legacy is good though. Garth’s rendition of Foxy Lady has unfortunately spawned a multitude of imitators over the years of which, sadly, I have been the recipient more than once.