You are here: Home / Film Reviews / Blinded By The Light 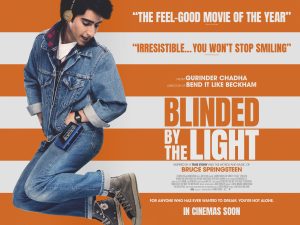 By 1987 Mrs Thatcher had been in power for eight years and believe me it felt like a whole lot longer than that at the time.

As if things could get any worse, Curiosity Killed the Cat, Tiffany and Debbie Gibson were mounting assaults on the UK charts. I’d tried to block all of those things from my memory but Blinded By The Light brought it all flooding back.

The movie isn’t nostalgia pretending to be social commentary though. “Writing is for English people. With rich parents” says Malik, the father of 16 year old would-be writer Javed (Viveik Kalva). Blinded By The Light may be set 32 years ago, but it often also pointedly shows us that the more things change, the more they stay the same.

Based on writer Sarfraz Manzoor’s memoir Greetings from Bury Park: Race, Religion and Rock N’ Roll (he’s also the lead writer of the screenplay) this is a comedy that intermittently turns into a Bruce Springsteen musical.

Malik (Kulvinder Ghir), emigrated from Pakistan to Luton and wants his son to avoid having to work for years in a factory like he has (“stay away from the girls. Follow the Jews!” is his parting shot as he drops his son off at sixth form college). That means Javed becoming a doctor, or an accountant, or an estate agent.

Javed is desperate to become a writer, and is already composing poetry and song lyrics, though initially it’s less love songs and more Reaganomics (ask your dad. Or me). And while being white and wealthy even now too often determines writing success, the positive effects of an English teacher who gets you should never be underestimated (waves at Mrs Robson, wafting into the classroom in 1985 on a cloud of chiffon scarves and strong perfume, whose lessons left me not only determined to write but also able to pronounce hyperbole). Javed’s English teacher is the very sincere and supportive Ms Clay (Hayley Attwell), who forces Javed to take his writing seriously.

College is made up of tribes divided by music, fashion and politics. His new friend Roops (Aaron Phagura) introduces him to Bruce Springsteen, which is life-changing, though no one can really believe that Roops, who is a Sikh, and Javed, a British-Pakistani Muslim (or indeed anyone under 40) might be into him. But the pair hear The Boss speaking to blue collar workers who are increasingly disenfranchised. And Springsteen gives Javed something he needs – the agency to take risks, whether going for the girl or reaching for writing opportunities.

Terrible times make us want to look back, but the film has so much resonance with the present day that it’s more discomfiting than comforting: the resurgence of fascism; the social and political polarisation; even the fashions are back.

Javed is the same age as I was in 1987, and I remember walking into sixth form college that September, though mine wasn’t as stuffed with ’80s stereotypes as his.

Initially these caricatures made me uneasy. By 1987 were girls really dressing in early-80s Bananarama outfits? Did teenage boys still want to emulate Duran Duran bassist John Taylor, like Javed’s friend Matt? I don’t want to start turning into a “but that’s the wrong kind of WW1 gun / width of crinoline / shade of 1970s avocado” movie-ruiner. It just jarred, for a while. The ’80s weren’t just a uniform decade of synths, crimped hair and CND badges; fashion and music moved quickly here.

It was only after watching the whole film, observing its mix of gritty ’80s realism and joyfully sincere song and dance numbers, that it started to make sense. (The heightened imagery also reinforces the polarisation in the country at the time.)

I don’t think it always works. That may be my authentic 1980s-honed cynicism at play. Sometimes it comes across as so earnest and sentimental I just couldn’t let myself fall into its double denimed, all-enveloping warmth. But when it does, it’s a blisteringly forceful and thoroughly entertainingly experience. And at least Manzoor and director Gurinder Chadha are adding twists to the storytelling of a familiar tale.

While I wasn’t taken with an impromptu dance routine among cheery strangers in the local market, the scenes when Javed listens to The Boss alone are fabulous. Lyrics appear in the air beside him. His first foray into Bruce tapes is filmed like one of those late ’80s narrative pop videos with thunderstorms and racism, and his dad berating his mum to work harder at her sewing, as Javed sings along.

Nostalgia is often curated memories, but here we’re forced to face the bad with the good: that familiar orange signage on the job centre with only a handful of advert cards inside; the appalling racism not just from National Front supporters living on Javed’s estate but little white kids pissing through an Asian family’s letterbox.

The good will delight anyone my age: music, teenage activism, fashions, even 9 year old Javed getting a backy on Matt’s new Raleigh Chopper. (Though disappointingly Javed never makes his activist girlfriend Eliza a compilation tape with special doodles on the cardboard sleeve.)

There are quite a few tropes, including the elderly neighbour who turns out to be not who we assume him to be, and Eliza’s Tory parents who resemble Maggie Thatcher and Norman Tebbit crossed with John Cleese. The only people I’ve ever seen who look like Maggie Thatcher and Norman Tebbit are Maggie, Norman Tebbit, and actors playing middle class Tory parents in British movies. Those tropes weigh it down, but it gets a second wind in the final third, as Javed’s writing takes off and circumstances push the family to breaking point.

Kalra is pitch perfect as Javed, complete with that clear-sighted teenage conviction that starts to tip into self-righteousness. I loved Ghir as his father Malik too, his alienation and shame at the loss of his role as main breadwinner when he’s made redundant, made worse as he sees so few ways available to him to respond. Meera Ganatra plays Javed’s mother Noor with quiet dignity and devastation as she tries to hold the family together through its conflicts.

So much of the film is about people thinking they know their tribe, before finally realising that it’s okay to belong to several – that the world should be a Venn diagram not a row of silos.