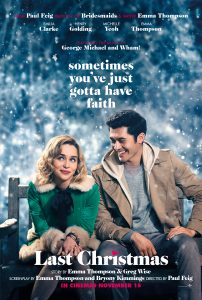 Twenty-something me had quite a lot in common with Kate, the twenty-something heroine of Last Christmas: blonde bobs, a love of fake leopard print, and a job in a Christmas shop.

As I’m now an ancient 48, you could say I’m her Ghost Of Christmas Future, and if that’s not a warning to her to sort herself out and slow down on the shagging, drinking and burger-eating, I don’t know what is.

Kate (Emilia Clarke) is a disaster zone, and not even a funny disaster zone, though she tries to put a kooky spin on her selfishness. Thrown out by flatmates, friends and everyone she tries to cadge a nighttime sofa off, you can see why no one wants her there.

Endless apologies result in last chances that she then blows by bringing random men home for the night. Flashbacks show her breaking someone’s prized possession, or electrocuting their fish by mistake.

A year on from a life-threatening illness, on the surface she’s now an ungrateful wretch, and underneath a deeply troubled young woman trying to outrun something she can never escape.

Her parents live in London but that’s the last place she wants to go. Mother Petra (Emma Thompson) is desperate for a role in her daughter’s life and has unresolved feelings about their flight from Croatia in the late 90s. Her dad, a lawyer who is now a minicab driver, stays out most nights working to avoid his wife (why? She’s not that bad). Her sister Marta is a lawyer, given the task of finishing what her parents could not.

Santa (an icily hilarious Michelle Yeoh), the owner of the year-round Christmas shop where Kate works, is fed up with her unreliability and restlessness.

After that he keeps popping up on his bike but never tells her when he’ll be back, and doesn’t have a phone (it’s shut in a cupboard at home).

As she becomes more attached to the only calm in her turbulent life, he starts to hold back, and she’s left feeling – drumroll, please – ghosted.

I’m going to spoiler this massively, though you’ve probably already guessed what the film’s twist is. The clue is, for once, in the name, as long as you’re a Wham! fan.

Will Kate swap the random bad boys and their careless whispers for Tom, watching her from the edge of heaven? Is he indeed everything she wants? Come on!

Yes, Tom (Henry Golding) died the previous Christmas; his heart was given to Kate as she lay in hospital at death’s door. Dead Tom is remarkably patient with her at first, proving it is indeed the good who die young as he nudges her towards a more fulfilling lifestyle that includes helping out in a homeless shelter.

Thank goodness we all guessed the twist though, as the actual reveal is unwieldy and sappy. Actually much of the film is unwieldy and sappy, which is a shame as when it does work, it’s Christmassy fun. The problem is just as we’re getting somewhere, those tinkling festive bells become the clanging chimes of doom and it all collapses into the kind of Christmas tat Santa and Kate sell in the shop.

I should probably add, for the sake of transparency that I have a sort of history with co-story creator and Mr Emma Thompson, Greg Wise. Growing up in Newcastle, we were next door neighbours, and he may well have witnessed my mum’s extraordinary homemade Christmas decorations, which she made by punching bits out of tin can lids and decorating them with shiny stuff. Razor sharp and highly dangerous, though that’s enough about my mother, these digit-threatening baubles were also rather pretty, and would be a good metaphor for the kind of cutting yet sparkling Christmas romcom I hoped Last Christmas would be, but isn’t.

The original idea behind Last Christmas is one of those stories with a 95% chance of being a sentimental cheesfest and a 5% chance of being pure genius, and, well, it’s time to open that Stilton and put the Guinness away. The dialogue is often wince-inducing, with British National Treasures wasted on unfunny cameos.

Santa is a bright spot, the acidic lemon in a gorgeous festive citrus bowl. Yeoh is the best thing in the film: her slowly-blossoming relationship with a sauerkraut-obsessed Scandinavian who walks into her shop is a delight, their bonding over a sparkling red gibbon which sings Last Christmas an absolute hoot.

Clarke’s comedy style doesn’t fit with the other performers. Those lines that would be hilarious in a real conversation fall flat, and the often-soapy dialogue doesn’t help. She has a great smoky eye but you can probably learn that from a YouTube video. Golding is pretty good. It’s the first time I’ve seen him really acting and he’s a lot better than Crazy Rich Asians, or indeed the trailers for Last Christmas, led me to believe.

The many plotholes didn’t bother me; all movies where supernatural beings interact with living people have gaping crevices containing lost logic and common sense. I didn’t mind how Tom couldn’t open an unlocked kitchen cabinet to retrieve his phone yet could cuddle Kate, or his dance around people he might accidentally walk through when he could just step to one side like us mere mortals.

Presumably Tom is a ghost rather than her unconscious manifestation. How else could she know things he told her – like the whereabouts of that phone – unless we’re stepping into weird transplant story territory where people wake up to find they possess the memories of their deceased donor?

And what of George Michael? The songs are fabulous though they’re so familiar to someone my age sometimes they barely registered. I did listen to his greatest hits on the train home, though it was more a post-movie tradition than a sudden desire to reacquaint myself with Heal The Pain.

Last Christmas isn’t entirely awful but neither is it very good. I came out with a feeling of anticlimax, which I suppose sets me up well for Boxing Day if nothing else. Watch it now in cinemas with a group of your least bah humbug friends. Or next year, up late on Christmas Eve trying to put together a toy kitchen for your own ungrateful wretches, stick this on in the background to drown out your swearing.