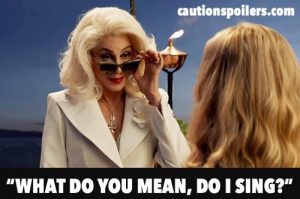 I’ve anointed this a four-star movie, and that’s despite it having no plot, and mostly so-so songs (as so many of the best-known classics were utilised in the first film).

So why four out of five? Well in my eyes it’s basically a two-star experience, but I’ve given it a whole extra star for the simply superb – and hilarious – big group musical number at the end, where not only do we get Meryl back, but also all the younger versions meet and dance with the older versions of themselves.

I say dance: Young Harry tries to dance, if you can call it that, with his even more uptight older self, but Older Harry stands on the dance floor in mortified silence. It’s a wonderful climax to an average film that will have you leaving the cinema genuinely happy.

And the other star I’m awarding is for the pairing of Andy Garcia and Cher.

With his distinguished grey beard and stoutly imposing demeanour, Garcia is starting to resemble one of those ousted ex-kings of long-disappeared minor European nations who still pop up in Hello! magazine, living their best lives on free vol-au-vents and champagne.

And he’s been carving out a niche playing gentle, kind and handsome 60-somethings, as we saw in Book Club earlier this year. Here he is Sophie’s hotel manager, with every woman over 40 falling for him (“Be still my beating vagina” is Older Tanya’s response when she first sees him).

And Cher gloriously sends herself up as Ruby Sheridan, Sophie’s grandmother and an uninvited guest at her hotel launch party. (To be fair the party is full of mostly uninvited guests.)

She also has some of the best lines: “being a grudge-holder makes you fat” being one of my favourites, and I’ll come for anyone who says otherwise, even if it takes me 100 years to find you and I’m the size of a house by then.

And yes I did say the pairing of Cher and Garcia (you know, I think I’ve just invented a new flavour of Ben and Jerry’s ice cream there). Will it help if I tell you his first name, which we only find out two-thirds of the way through? Her cry of Fernando, before breaking into song, had everyone in the audience in stitches.

I’m not avoiding spoilers, though there are no huge reveals that we couldn’t work out from the trailer. Obviously if you want to go in completely blind stop reading now, though I hope for the sake of fairness that you’ve also never listened to an Abba Greatest Hits album in your entire life.

What happens isn’t really plot so much as the passing of time, and people doing some things. Sophie (Amanda Seyfried), who lives with Possible Dad Sam (the still-swoonworthy Pierce Brosnan), has transformed their villa into Hotel Bella Donna, and is having a grand reopening.

She’s invited her other two dads, Bill (Stellan Skarsgård) and Harry (Colin Firth), who can’t come, and lots off millionaires who can, and the Press, and Dynamos Tanya (Christine Baranski) and Rosie (Julie Walters). Thanks to a terrible storm, the dads do make it but the millionaires and Press don’t. So Bill arranges for the local unemployed fishermen and their families, suffering under the Greek economic collapse, to come instead. Also arriving unexpectedly are Sophie’s partner Sky (Dominic Cooper) and her grandmother Ruby.

Oh and Sophie is pregnant but she knows who the father is, the really annoying Sky, and I was desperately looking for two other likely candidates but couldn’t find anyone.

Luckily we also get flashbacks of Young Donna (Lily James) – her life after she leaves Cambridge University in the late 70s, travelling to the island, and meeting Young Harry (Hugh Skinner) , Young Bill (Josh Dylan) and Young Sam (Jeremy Irvine) along the way.

Bill is a sailor, sowing his wild oats from his beautiful boat. Harry is a hugely diffident virgin – their first meeting in a French hotel, where he mistakes Donna for an employee and launches into a long and halting Frenglish monologue, is a joy. (If you think you recognise that privileged timidity with a side order of dimness, yes, it is Will the intern from W1A.)

Sam is a handsome love rat, whose leaving is only bearable because it coincides with the arrival on the island of Rosie and Tanya. (The casting of Jessica Keenan Wynn and Alexa Davies as Young Tanya and Young Rosie is perfection. They both look, sound and act like their older counterparts, and how great it is to see I’m not the only woman who keeps the same haircut and make up for 30 years.)

And that is pretty much it. Sophie has some minor internal struggles about living up to her late mum’s bravery as she prepares to be a mother herself, leading to lots of reassurance about how proud Donna would have been.

The songs are pleasant, with the odd barnstormer. Where he can, Director Ol Parker really works those tunes, too: Older Rosie singing Angel Eyes and getting increasingly frustrated as Older Tanya insists on finishing her lyrical sentences for her is a hoot.

Lily James is a wide-eyed delight and her particular brand of winsome free-spiritedness has yet to grate. Her dialogue is of the expected “I know where my life is waiting to be lived” variety, though respect for her cutting comment that “it’s not easy being a mother. If it was, fathers would do it”. And that’s even before she has her own baby.

Brosnan trolls the audience by starting to sing a song (I say sing, think Rex Harrison’s famous talking-to-music in My Fair Lady) then just… stops. There was an audible collective gasp from the audience when it looked as if he might keep going for the whole three minutes.

I have to be honest, I find Sophie, and Seyfried’s portrayal, insipid; and Sky (Dominic Cooper) something of a nonentity. But then this has always been a story constructed around existing songs, so individual characterisation has never had to be its strong point.

The island of Kalokairi is an oasis of happiness in a troubled world. Beyond those unemployed fishermen coming to the party, real life cannot intrude. Even tumbledown buildings collapse prettily. Running round a heat-seared orchard, Donna’s tangerine skirt perfectly matches the shade of the oranges she picks from the tree before being chased away by a very photogenic goat. Her three boyfriends are so privileged they’re running away from perfectly good lives for slightly better ones.

Parker has managed to craft a bouncily sweet tale from thin material and less well-known songs. It’s quite funny, and sometimes emotional, and switches from fun to acutely embarrassing and back again in the time it takes to say Money, Money, Money. Actually, that’s unduly mean of me. Let’s change it to Super Trouper.