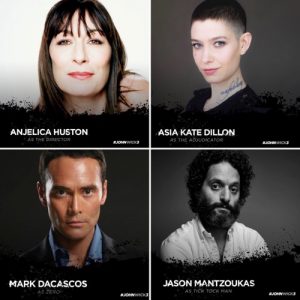 The Bad Batch, I mean the New Batch

…and the new characters make it sound like an underworld TV wrestling show.

So far, these actors new to the franchise have been announced: Asia Kate Dillon as The Adjudicator, Angelica Houston as The Director, Jason Mantzoukas as Tick Tock Man, and Mark Dacascos as Zero. Plus the wonderful Halle Berry as the straightforwardly named Sofia.

Also on board are Tiger Hu Chen, who starred in Reeves’ directoral debut Man Of Tai Chi, Yayan Ruhian (The Raid & The Raid 2) and Cecep Arif Rahman (The Raid 2). 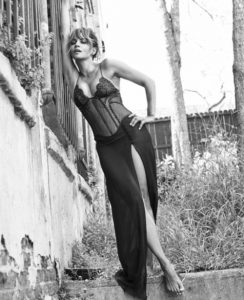 Back from John Wick: Chapter 2 are Laurence Fishburne as the Bowery King; Ian McShane as Lovejoy, I mean Winston; and Lance Reddick as host of The Continental, Charon. Rumoured to be returning are Common as fellow hitman Cassian, and Ruby Rose as Ares.

No one is entirely sure what these characters will be doing (well apart from adjudicating, directing, and clock-watching) though I’m most excited about Huston and Berry.

Halle’s character Sofia is apparently a mum, so I’m sure she’s used to wrapping unmentionable things in clingfilm then disposing of them discreetly, and she’ll have access to lots of homework-related stationery including pencils. 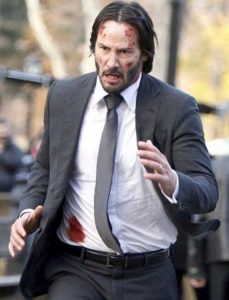 BUT IS SHE AS GOOD AT LAUNDRY AS ME? I think we all know the answer to that.

I keep wondering if Wick will be getting a love interest, then I remember these films are set only a few days apart, and:

(a) his wife has only just died.

(b) he’s been beaten up at least 35 times since then and is now 70% Elastoplast, so while there would be lots of shrieking and ripping off, probably not of the sexy kind.

(c) he’s just got a new dog who I can confirm, as a new dog owner (she’s called Daisy!), TAKE ALL YOUR LOVE.

So I’m not convinced he’s ready for it. (What do you mean, it’s just a movie?) 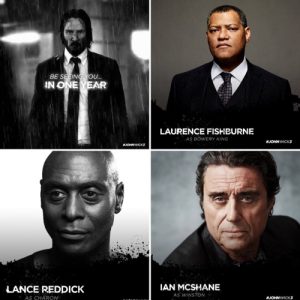 Coming in 2019: when I will be one year older & Keanu will inexplicably be 10 years younger.

John is supposed to have a clear arc through the three films and this is believed to be the last one in the series – certainly focusing on his character, anyway.

But Wick World may well be further explored in movies, as well as the up-coming TV show.

Personally I want a prequel covering a relationship with Miss Perkins, falling in love with Helen and the Impossible Task that Viggo Tarasov set him.

John Wick 3: Parabellum is directed by Chad Stahelski and will be released on 17 May 2019 in the US.

Parabellum is Latin for “prepare for war” so I imagine John’s smashing up a bit more of his basement this time.