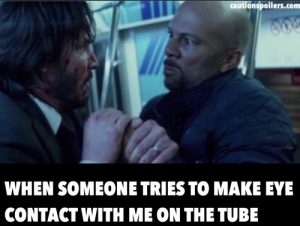 One question, asks Julius, the manager of Rome’s Continental hotel. John Wick, the world’s most feared assassin, leans forward to listen: “Are you here for the Pope?”

This absurd yet somehow sensible question sums up everything that is so perfect yet at the same time so batshit crazy about John Wick: Chapter 2.

Bigger and bolder than its predecessor, this new instalment also references the first film just enough to throw a knowing wink at John Wick afficionados and help out people who haven’t see the first instalment (I know, who are these people?).

Genuinely deadpan funny, it laughs at the absurdities that they throw at us, daring us to suspend disbelief just long enough. Accessible without dumbing down, it’s also super-sexy and of course extremely violent.

The sequel starts just a few days after the first film ends, with a clever retelling of some of the key legends around John Wick, even quoting from the first film (“John Wick is a man of focus, commitment, and sheer… fucking… will”) – but this time from the mouth of Viggo Tarasov’s brother, Abram (Peter Stormare), as he and an underling wait for Wick to come to their chop shop for his stolen car.

The mythology of Wick combined with the near-mysticism of the rules these criminals live by is illustrated with Abram’s assistant naively asking why they can’t simply eliminate Wick, and interrupting his boss’s storytelling to say that yes, he already knows about the infamous death-by-pencil killings.

Wick has indeed come for his car, which he retrieves while despatching most of Abram’s henchmen; after which he appears in Abram’s office where the two men have a drink, chat in Russian, and make their peace.

It isn’t just Russian that Wick can converse in – it turns out John can speak nearly as many languages as Amy Adams in Arrival. So many in fact that I half-expected him to bark at his new dog.

There is a plot, and this time it’s not one that will make people scratch their heads at what an ex-hitman will do if someone steels his car and kills his puppy.

Santino D’Antonio (a sleazy Riccardo Scamarcio), a high ranking Italian crime lord, comes to Wick with a Marker; a blood oath signed by John after Santino helped him on that infamous day when Wick was given an Impossible Task by Viggo, the completion of which would allow him to leave the underground world and marry Helen.

Now D’Antonio has come to redeem this Marker and wants Wick to kill his sister Gianna. But one death has to be avenged by another, so paying this debt simply makes Wick a target for Gianna’s bodyguard Cassian (Common).

And, in a masterstroke of cognitive dissonance, Santino – like the apocryphal children who killed their parents then pleaded for mercy as they were now orphans – decides to avenge his sister too, by putting out a contract on John.

There is more exploration of the world and rules of The Continental which turns out to be a network of hotels around the world, with their own supporting businesses: the Sommelier (Peter Serafinowicz), ensconced in the Rome hotel, who manages his array of guns like fine wines, an appropriate one recommended for each course; the tailor showing off his tactical bullet repelling suit linings; and the admin department managing hitman contracts.

And of course, the long, long scenes of violence, strangely beautiful while brutally animalistic. The physical fights and the shootings are often entwined as the participants look for anything to hand to subdue their opponent – bullets, brawn, knives, and yes there is a god, even pencils.

The brutality has clear consequences; John spends most of his time limping thanks to oozing stab wounds, huge bruises, endless cuts and beatings.

It does get a bit silly at times. There appear to be so many assassins in the world that I’m starting to worry that due to their sheer ubiquity I might actually be one myself.

But the clever, appropriately dark humour is never far away. Wick and Cassian fighting and crashing their way through a window at the Rome Continental and then immediately having to dust themselves down and share a drink in the hotel bar as no business can be conducted on the premises; fighting in a subway carriage while passengers avert their eyes as public transport users are so used to doing, though usually to avoid a chatty fellow commuter rather than two well-dressed killers trying to murder each other.

Laurence Fishburne as the Bowery King (a New York crime lord who manages his business via a network of supposedly homeless beggars around the city) is typically commanding when he appears, though he isn’t on screen for long (I’ll be amazed if he doesn’t turn up in a bigger role in Chapter 3).

Winston’s role is expanded, as the man who’s reach extends further than we could have guessed, and who has to ensure strict adherence to the rules of the Continental while also clearly taking a protective interest in John which verges on fatherly.

Common as Cassian, Gianna D’Antonio’s bodyguard, is believably committed and focused. He and Wick are well matched.

Ruby Rose, whose rubescent name whenever it is mentioned makes me want to whisper “so good they named her twice”, doesn’t really seem to do much as mute enforcer Ares until one climactic and brutal scene with Reeves. I don’t know whether her role was talked up to counter the lack of women in the previous film (who were – apart from the fabulous Miss Perkins – either pouring drinks behind a bar or already dead).

The film looks extraordinary. The rain is still falling in New York, and the scenes in Rome contrast the from-on-high vistas of famous landmarks with the tiny dark cobbled streets at nightfall and the network of blue-lit catacombs beneath the city. In a series of fights, mirrors shoot back reflections of Wick and his opponents which dazzle and confuse.

And as is befitting for a story that unfolds at least partly near the Vatican, imagery around religion and the afterlife is ever present: descents to hell, popes, priests, ghosts and spectres, the Emissary of Death.

Keanu Reeves is astonishing, acting through the sheer physicality of the role. It’s still just a few days since John’s wife died and the events of John Wick, so he’s still grief-stricken and still injured. His scream of physical and mental anguish as he goes to collect his assassins’ safety deposit box is very moving. Reeves’ performance at the very end of the film really reinforces how much of a physical actor he is rather than a speech-y one. He doesn’t need to say anything. It’s also a perfect set up for Chapter 3.

Site info here.
Or email me on [email protected]lers.com