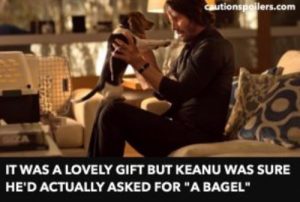 John Wick quickly lures you into its strange and self-contained world of murders-for-money, justified with an ambiguous sheen of honour.

Its violence is repetitive yet compelling, the gunshots and stabbings almost hypnotic, as retired hitman John Wick and his old gangland boss Viggo Tarasov (Michael Nyqvist) face and chase each other across New York with an implacable determination towards an already-inevitable outcome. The fight scenes are like watching a murderous ballet unfold elegantly around you.

There are a couple of minor irritants – the rather odd claim that uber-assassin Wick is both The Bogeyman and The Man Who’s Sent To Kill The Bogeyman (which sounds like a late-90s Travis album), and John turning out to be called Jonathan, which should make this film Jon Wick.

But apart from those, which are likely only to raise the hackles of editors like me and people called Jonathan, who nearly had a film named after themselves, this is a five-star movie.

Wick’s re-emergence into the dangerous world he thought he left behind is driven by Daisy, the world’s cutest beagle puppy. Sent to John by his wife Helen after her own death to make sure he has something to love beyond his vintage Mustang, poor Daisy has such a sad plot-line I’m not even going to delve into the question of whether you should give someone a pet as a present.

After bounding merrily into the ex-hitman’s life, little Daisy is almost instantly exposed to the worst of the gangland underworld, as she’s brutally murdered by Iosef (Alfie Allen), the whiny, vicious son of Wick’s Russian gangster ex-boss Viggo.

Iosef isn’t used to people saying nyet, and when Wick refuses to sell him his Mustang breaks into Wick’s house during the night and beats him, murders the “fucking dog” and steals the “fucking car”.

So John – who once killed three men in a bar with a pencil (sorry, “a fucking pencil”) – digs up his underworld gun stash and goes back into battle, this time against Viggo and his son.

Wick is an almost mythical figure in the underground world of assassins; the scene where Iosef is informed of just who he’s roused from gangland slumber is genuinely menacing, with a finality of what will happen already in place.

John’s nicknames – Baba Yaga, The Bogeyman, and Late-90s Travis Album Title – all set him up as someone coldly implacable and mechanically vengeful, different even within the shadowy world of killers and criminals.

That world is showcased best by The Continental, a hotel for hitmen and women, managed by the suave and increasingly ambiguous Winston (Ian McShane). Supposedly rule-bound (no killings can take place within the hotel; control is tight and he ruthlessly manages any rule-breaking) its proprietor certainly has a soft spot for Wick.

The Continental may be the central pillar of their world but there are plenty of support services too. I particularly liked the cleaning company, who turn up – within minutes of one of John’s mass slaughters – supplied with Windolene and cling film to clear his minimalist all-white home of blood and bodies.

There’s not much talking and what lines Wick does have are either short and gruff (“it’s personal!”) or very long and in the present continuous tense (“people keep asking me if I’m back and up til now I didn’t have an answer, but now I’m thinking yeah I’m back!”). And while there are a few bleakly funny one liners, I wouldn’t go so far as to call it a comedy.

Reeves is extraordinary. Half-human, half-automaton, thanks both to the exhausting numbness of grief and his long-honed skills, it seems an entirely normal reaction for Wick to kill his way to the pampered man-boy who murdered his puppy. Of course it’s not really about the death of his puppy, it’s about what Daisy represented in terms of Wick’s ability to grieve for his wife, an explanation which the normally taciturn Wick screams at Viggo and his henchmen when tied to a chair, all looking lost for him.

Michael Nyqvist is compelling as the world-weary gangland boss whose romantic melancholia over the way his son has turned out forces us to sympathise with him, even as he’s ordering his best assassins to go after John, a task he knows is hopeless. (Viggo and Winston are very similar. Both are rule-bound within their underground world, with occasional deviations. Both know exactly how every situation will play out, so often have they played these chess games.)

I’d have loved to have seen more of catsuit-wearing hitwoman Miss Perkins (Adrianne Palicki), who kicks ass (and Wick’s nuts) so efficiently. The other women in John Wick are either already dead or serving behind a bar.

There’s a self-contained perfection to John Wick that makes its craziness easy to ignore. And despite the jokes, it never laughs at itself. If anything it can be a bit po-faced. The world-building (the Continental hotel, Wick’s semi-mythical past successes) are fascinating and make us want to be a part of it, this parallel universe that carries on around us, occasionally bumping our lives. We’re the hitman world’s Muggles.

But while the world builds, Wick himself is pared down: suit, weapons, single-mindedness, rage and grief.

In some ways it’s a remarkably realistic environment; Wick may be an implacable killer who can take out a whole team of assassins singlehandedly, but he also gets very beaten up, and by the end he’s being held together by stitches and bourbon.

New York is a darkly brooding rainy city where the only brightness seems to be the red and blue of a nightclub spotlight. Days are dull and dreary. The music is astonishing, a soundtrack to a bleak, self-ruled underworld.

John Wick ends as happily as it’s possible for a brilliant but grieving assassin to end up, after shooting 80 people and being in several fights. But at least that means a chance of a sequel. Hell yeah!