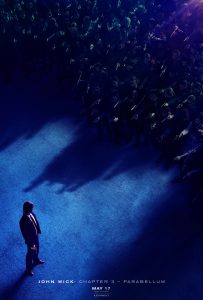 Si vis pacem, para bellum – if you want peace, prepare for war – is the Latin maxim from which this film’s title comes, quoted by Continental Hotel manager Winston (Ian McShane).

This is indeed a climactic battle, if sometimes a proxy one, between two ageing institutions – the High Table, a ruling elite that no longer seems fit for purpose; and John Wick, who should also be no longer fit for purpose, yet keeps dragging himself up off the floor to kill again.

John Wick: Parabellum kicks off a few minutes after Chapter 2 ended, with John and his dog running through Manhattan.

They’ve got an hour’s head start before the world’s assassins can chase the $14 million bounty on his head, a punishment handed down by the High Table after he killed one of its members in the hallowed environs of the Continental.

And this first act, as John fights his way out of the city, is so extraordinary you wonder if the rest of the film can keep pace. It just about does, though the action sequences throughout are less a crescendo and more a series of screeching musical peaks.

The third in the franchise, Parabellum is an astonishingly rich feast. The violence is exuberantly brutal, the world-building extravagant and lovingly detailed, the jokes surprisingly frequent.

Keanu Reeves is exceptional, relentless and implacable, taking John Wick to the next stage of a mind-boggling journey now so extreme he often seems poised to finally tip over the edge.

Could we have ended up anywhere else? Winston told John what would happen back in the first film: “You dip so much as a pinky back into this pond, you may well find something reaches out and drags you back into its depths”. Parabellum is utterly believable and completely absurd – and yet again I can’t escape the feeling that we’re allowing ourselves to be taunted by a franchise that never mocks itself. We’re like Wick’s opponents, complicit in their own deaths.

The overarching theme of the John Wick series has always been escape, whether it’s possible for anyone to extricate themselves from its world.

Consequences and loyalty are woven through Parabellum and both look to make escape impossible. The third theme, remembrance, is why escape from the contract on John’s head is so vital.

The consequences of killing John’s puppy, of John’s hubris in re-entering that world, of John killing in the Continental Hotel – and consequences for the assassins who decide to take on Baba Yaga, the Bogeyman, the Man Sent To Kill The Bogeyman, grief-stricken husband and bereaved dog owner “Jahhnn Wick”.

The High Table too likes consequences, for breaking rules they’ve imposed so they can think themselves better than animals, untroubled by the cognitive dissonance it should create within these murderers for hire.

And loyalty: old friendships, personal debts, blood oaths, the High Table itself. Running counter to this is affection for John as strong as the admiration (even people who want to kill him are puppyish fans in his presence).

“That’s him!” echoes around Manhattan. Despite the hordes of assassins after a piece of that 14 million, of course some are gunning for him to win. He’s a renegade outsider, up against snitches ready to inform on anyone helping the legendary John Wick. I’m amazed they’re not selling Wick memorabilia in the Continental foyer. Perhaps one of those musical ballerina jewellery boxes, but lined with black satin and featuring a bloodied, gun-toting John Wick spinning slowly round to the dulcet tones of Marilyn Manson.

Proof of loyalty is constantly required by the High Table, as almost-renegades take stock then retreat into the fold. Its Adjudicator (a compelling Asia Kate Dillon, enjoyably baffled by any resistance encountered), stalks New York’s underworld, pompous and frosty, exposing transgressors who dared to break the rules. It shows the High Table’s weakness, that its protocols have to be upheld so perfectly for it to maintain its existence.

Wick’s world has always had a religious flavour. The Continental in New York is a cathedral with its sanctuary, run by an off-message Archbishop, Winston, a man of ambiguous loyalties and his own fiefdom. And here’s the Pope sending an emissary to clean up the mess and ensure everyone swears fealty again. At one point Wick is even told to follow the brightest star in the sky to find redemption (though most of the biblical ideas are distinctly Old Testament – not literally an eye for an eye, but pretty close – rather than New).

John’s Escape From New York has him leveraging every possible favour, increasingly desperate, in between a knife fight that leaves one attacker a human pincushion, and John clattering through Manhattan on a horse.

His trip to Casablanca in search of a way out is both preposterous – a man in a sharp suit staggering up an orange sand dune – and touching, as darkness falls and he stands in a freezing desert beneath a coldly-twinkling night sky.

Reeves’s new co-stars are mostly a series of extended cameos, exploding onto the screen before handing the baton on to the next one. The women in particular are beautiful, if briefly burning, character studies: Casablanca Continental hotel manager and fellow assassin Sofia (Halle Berry, terrific), her pain colouring what she expects others to endure; and Angelica Huston’s Director, enervated but accepting of what allegiance to the High Table means: “life is suffering” she says nonchalantly to Wick.

The Bowery King (Laurence Fishburne) is back, working off-grid. “You see rats with wings, but I see the Internet!” he tells the Adjudicator of his carrier pigeons, with his messenger Tick Tock Man (Jason Mantzoukas), able to do his job precisely because we’ve trained ourselves not to see homeless people. And hotel concierge Charon (Lance Reddick), a stalwart of John Wick  and Chapter 2, finally gets to show us what he can do (give him his own origins movie, please).

Berrada (Jerome Flynn), a fun but forgettable crime lord and literal money-maker, talks of social contracts. Remember Hobbes – he’d have loved the High Table. Rousseau would have understood its corruption and effects: ‘Man is born free, and everywhere he is in chains. One man thinks himself the master of others, but remains more of a slave than they are’.

And Zero (Mark Dacascos), his admiration of Wick not going to stop him killing the man and more likely its driving force: what bigger scalp is there?

John Wick 3 references previous world-building: the world-weary doctor who patched him up in the first film (Randall Duk Kim) is back. We also find out more about Wick’s origins: “Why have you come home?” asks the Director. And considering how often John Wick’s murderous fights have been described as “balletic”, I liked the actual ballerinas practising in the background as Wick begs her for help.

This time there are longer visits to the hub of High Table administration, an old-fashioned room of secretaries on typewriters, beneath a chalkboard listing Excommunicado assassins and their bounties. Tattoos and piercings abound in an underground world based on the real world’s old-fashioned rules and surface courtesies, but populated by the people it rejects. (I’ve said before that we are like the Muggles of the Wick Universe, occasionally bumping up against this other world: a parallel society both back in time in its set up but with ultra-modern weaponry and running on an entirely different morality to our own.) 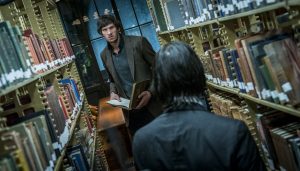 Fear not, librarians, the Dewey Decimal Classification System is safe with Mr Wick

The bleak comedy provides a breathing space during the fighting. If anything highlights the perfection of Mr Wick it’s his ability to throw in a gloomy one-liner after killing several people and taking a good kicking himself. (Look out for a great dog joke between Sofia and John.)

Outlandish, pitiless, witty and most importantly madly entertaining, John Wick: Parabellum is also, like its predecessors, utterly gorgeous. From that desert to the neon-lit rainy Manhattan street grid, and the hidden interiors of the Continental, some brilliantly sparkling glass and some elegantly old-fashioned, these are beautifully painted sets for operas of violence.

It’s not an emotional journey; the audience will probably only be invested in John and his dog (especially the dog). Maybe it’s because, despite the photo of his late wife Helen, we’ve lost that connection with her. (It’s only afterwards I realised this. Watching the film, the audacious brutality, bleak humour and dazzling beauty paper over any cracks.) And sometimes the layer upon layer of imagery can become a little wearing.

During the action sequences director Chad Stahelski cranks up the craziness as far as he possibly can – ninjas on motorcycles, killer dogs, underwater gunfights. It’s often madly funny, but the laughter is also an anxiety-release switch after some epic savagery. You wonder if Wick can go any further (usually right before he does).

And if you freak out if someone turns down a corner of a page in a book, the New York Public Library bears witness to an act of violence that may leave you mentally imposing terrible punishments involving pencils. (I laughed, but I’m that monster who frequently drops classic novels in the bath. Though if any librarians are reading, John does at least put his improvised weapon back in the right place on the shelf.)

When he isn’t fighting John sits and moves with a self-contained awkwardness, like a fish out of water, even before injuries leave him staggering. Fighting and combat seem his natural state.

No wonder he never dies – however injured he is, he comes alive, ferocious, lithe and focused, when the fighting starts. How can you escape a world when it’s the only one you’re built for?