You are here: Home / Film Articles / 10 What’s With Wick Moments From John Wick 1 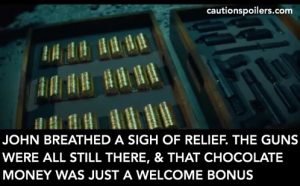 *** Check out the new trailer for John Wick 3: Parabellum, plus new poster ***

And in between headshots, that 98 minute running time includes some weird Wick-edness.

John at Helen’s funeral had the world’s largest umbrella. And Willem Dafoe attended too with the world’s second largest umbrella. They actually had to shout at each other from opposite sides of the cemetery because of the risk of the spokes in their enormous umbrellas getting all tangled up. Together those two umbrellas covered most of New York and everyone must have thought the weather had suddenly changed for the better and put their washing out and shit.

I’m not going to lie. When it comes to characters-in-another-film-universe wishful thinking, my second favourite fantasy (after Ripley, Hicks, Newt and Jones the cat living happily as a family on a xenomorph-free planet somewhere in the solar system) is Miss Perkins and John Wick teaming up to fight assassins like a nihilistic noir thriller version of 1980s crime fighting series Hart to Hart.

The Russian doorman Francis at the Red Circle nightclub. He’d lost 60lb. As John said, impressive! I would just like to say IAM SO PROUD OF YOU FOR BEING THE VERY BEST YOU CAN BE, FRANCIS. Though even if you’ve since put it all back on again eating dumplings and stuff that’s fine too. No body-shaming here except of mine and only by me, and then you all have to say “god no Sarah you look hot as fuck”.

When they bump into each other at the Continental they clearly have a shared history (come on, they’ve got to have shagged each other at least once and it must be pretty boring staying there as no one is allowed to conduct any actual business). But she calls him John, while he calls her Perkins. Not even MISS Perkins. Which to me is just rude, and frankly after that I’m not surprised she broke into his room and kicked the crap out of him. You brought that one on yourself John, MANNERS COST NOTHING.

That epic fight with the divine Miss Perkins (yes I know, her again). He’s in boxer shorts and a white T-shirt. They chuck each other all over the place and his boxers DO NOT MOVE. And I looked really, really closely. Someone stitched them up didn’t they. Honestly directors, please give us ladies something to look at besides gunshots, much as I love gunshots. Miss Perkins’ leather catsuit didn’t move either but those things are a bugger to get off. So a friend told me anyway.

6, The Unusual Case Of The Present Continuous Tense In The Nighttime

The present continuous tense is an action that is happening and ongoing. A bit like when John Wick kicks the shit out of people. He uses this a few times – to fellow guest Harry in the Continental Hotel who asks if he knows Wick: “I’m thinking so”, then to Viggo before they stick a bag over his head and he says that iconic line “I’m thinking I’m BACK!” There, as you were.

There are going to be sequels-a-go-go for John Wick. I fully expect that in 30 years we’ll be watching an 80 year old Keanu Reeves stabbing elderly hitmen with a poisoned walking stick, and finishing off with his calling card of a Werther’s Original stuffed down their throats. Then he’ll dispose of the bodies by wrapping them in a tartan blanket that usually goes over his knees when it gets a bit chilly.

8, The Lack Of Vitamin D

It’s a good thing everyone dies by the end as otherwise they’d all have succumbed to rickets. It rains constantly, the sun never comes out, and it’s always dark (when it’s not red, or blue or green – that lighting!) I hope Wick staggers home with his new dog and has a big plate of salmon and leafy greens.

You know, the little one that says One Direction. I’M KIDDING! It says “Fortis Fortuna Adiuvat”. I studied Latin many, many years ago (not actually in ancient Rome – believe it or not kids I am not *that* old and unlike Keanu Reeves I am not immortal) and although my studies mainly covered Caecilius in the forum and Metella in the atrium, and some poems by Catullus about a woman whose pet sparrow dies and she does ugly crying, I did manage to translate this VERY roughly as “fortune is helping the brave” though then I googled and apparently it’s “Fortune Favours The Bold” which is the motto for the 3rd Battalion Marines based in Hawaii.

Doesn’t John have any? I find this lack of care towards personal security from the world’s top assassin odd, to say the least. Just think how it could be though – as he starts going upstairs to bed he decides to check the front door. It’s unlocked! he sorts that out and switches on the alarm system then he goes to sleep and no one breaks in. The next day:

– He emotes over Daisy the dog, possibly singing “Love Will Tear Us Apart” by Joy Division to her while he wiggles her ears.
– He and Daisy bond while going for blustery walks along the beach, or evening drives in his Mustang thingy.
– They live happily ever after.
– They could call the film “The Hitman & Her”. *