You are here: Home / Film Articles / Marshmallow Movies – That Sinking Feeling, But In A Good Way

These are the ingredients I need in my own marshmallow movies.

But a marshmallow movie can be any genre, from tear-stained family drama to zombies in space. They may be sweet but it’s more a comforting pillowiness, and if that’s how post-apolcayptic found footage makes you feel, congratulations, have a marshmallow.

Marshmallow movies are not always old favourites, though an old favourite can be a marshmallow movie. I love John Wick but I didn’t go “Ahhhhhhh” that first time I saw it (I actually went “Oohhhhh!” but the reasons for that will have to wait until I unveil my Keanu fan fiction on an unsuspecting, frigid world).

So how do you know if a film is actually a marshmallow movie?

1. As the film starts you have to suppress the urge to stand up and shout “THESE ARE MY PEOPLE” while clasping everyone else in the audience to your bosom.

2. You find yourself letting out a semi-involuntary “Ahhhh” the way people over 40 do when getting into or out of a comfy chair (off-topic, but the chair thing really does happen so you might as well start practising now).

3. If in future you meet one of the stars of the film you cannot understand why they don’t want to talk about that and only that film, even 15 years and several Oscars on. (Later, you start to suspect they may have actually forgotten they were in it.)

4. You do not want a sequel as they will ruin it. It will take 35 years for you to change your mind on this one, but at least that gives you time to do your pelvic floor exercises in readiness for the three hour epic coming your way.

5. On Twitter you always always chose a gif from the film even if completely unrelated to your tweet.

Here are some of mine, every one a gem of cinematic squidginess, none of them saccharine:

I suspected I’d love this before I saw it, but the sound I made when the lights went down beat anything Meg Ryan managed in that diner.

It may look all twinsets and pearls; a 40s-set film about the making of a propaganda movie about Dunkirk. But it’s surprisingly gritty and covers a lot of social issues with grace and wit.

Plus an awesome turn by Bill Nighy as Ambrose Hillyard, a past-his-best old ham, living for the dwindling praise of fans and probably switching on the Christmas lights in a town near you this year. 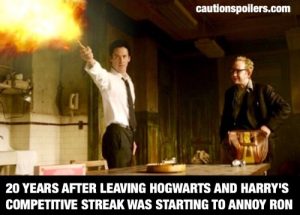 This is a film with so many things I love: Keanu Reeves, cigarettes, a cat, and somewhere warm to end up in. Okay, while being ripped apart by demons for eternity. But WARM.

Basically this is Keanu’s occult hitman prequel, John Wick: Book of Revelation. What is an exorcist if not a religious hitman? And Papa Midnite’s red-lit bar, with no heavenly or hellish business allowed on the premises, could easily be the Continental with angels and monsters replacing opposing assassins.

Though spare a thought for poor old Rachel Weisz who gets to have a bath in the presence of Keanu for the SECOND TIME (the first was in Chain Reaction) but yet again she has to keep her clothes on.

So laugh-out-loud if you’ve ever squeezed out a baby you’ll find yourself accidentally squeezing something else out here. And that’s exactly what happens, on a zipwire, above a street filled with revellers. 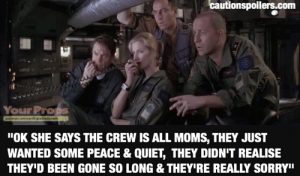 Yes really! Massively underrated on its release 20 years ago, it now has a cult following of true cinephiles by which I mean me and some people I met on Twitter.

The technologically advanced spaceship the Event Horizon, which can travel great distances in a few hours by folding time, has disappeared.

Seven years on it reappears orbiting a planet, but when the rescue craft arrives it turns out that when Sam Neill designed the original ship, he remembered to work out how to send a rocket to the fires of the netherworld but he forgot to tell Beelzebub.

I really did get that sinking feeling, though I had to stop myself falling before I got to the actual gates of hell itself, which are presumably not made from candy floss and jelly beans.

One of those small-scale gems you will spend your life encouraging people to see, then feel slightly annoyed when they do. Still, I finally learned how to spell Berthnal. I mean Bernthal.

Starring Jon Something Beginning with B, this film is not remotely sweet unless you like to eat pickles dusted lightly with gunpowder as a teatime pick-me-up.

But it’s an indie, and features a hot, kind man with a beard, and a middle-aged sex scene, and it’s only 90 minutes long.

A noirish tale of a murder gone very, very wrong, Sweet Virginia boasts an impeccable cast and a villain so scary if I met the actor who played him I’d shout out some compliments about his performance, while running like hell in the other direction.

And young, vulnerable Lila, who gets rid of her brute of a husband, then discovers he wasn’t the wealthy entrepreneur he claimed to be, and now she can’t even pay for the mahogany casket she buried him in. I would happily have re-murdered him myself at that point. (Look I warned you at the top of the page I’d always back the women.)

Marshmallow-like in her endless ability to bounce back, yes, but sweet? Widow and mother Lady Susan most definitely isn’t. Based on Jane Austen’s novella Lady Susan, our anti-heroine is expertly played with enormous wit and even more enormous hair by Kate Beckinsale.

“In one’s plight they say is one’s opportunity” says the never knowingly defeated Lady Susan, and if that’s not the ultimate explanation of Twitter, I don’t know what is. Lady Susan is easy to criticise but I will hear nothing against her, particularly if you are an 18th Century male aristocrat with a big house, living off an inherited ten thousand a year from a will based entirely on primogeniture.

The costumes are a delight and by that I obviously mean the dresses. I have no idea what the men were wearing and frankly who cares? 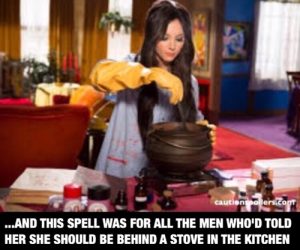 If you’ve ever cast a love spell then got so annoyed with the resultant neediness when it actually worked that you had to murder the recipient, then The Love Witch will speak to you.

The rich colours, gorgeous 60s and 70s clothes, and sports car in a studio with a scene playing behind it to make it look like our heroine is driving, make this enough of a marshmallow film; but it’s also funny and quite scary, as a young witch casts spells to find herself a man and it all goes horribly wrong. Well for the men, anyway. 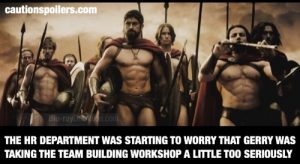 I guess I just feel an affinity with Spartans. Maybe it’s because I grew up in the frozen North, so going out in the snow on a dark night in not much more than leather shorts wasn’t really that unusual for me my teenage years.

I was also a bit of a know-it-all, so sometimes I modelled myself on 300’s Oracle in M&S knickers and a lace curtain, though obviously I kept that “for best”.

And no one does heroic victories that are actually enormous defeats like us Brits.

Add in Gerard Butler with a beard (sadly no chunky knitwear, we’ll have to wait till his upcoming chilly lighthouse flick Keepers for that), Lena Headey fighting the Council (I’ve done that too though usually over missing bin day collections), and a very sexy (if somewhat s.l.o.w.) sex scene and it’s no wonder this film makes me feel like I’m collapsing into a whole bed of fluffy marshmallows.

Another marshmallow movie that is in many ways quite dark. The true story of Gloria Grahame, black and white movie star and Oscar winner, falling in love with 28 year old Liverpudlian actor Peter Turner in the late 1970s. Gloria as played by Annette Bening is both impossibly glamorous, and impossible.

Their affair is fiery and loving, but burns itself out – until a couple of years later she is diagnosed with cancer for a second time, and returns to his family home in Liverpool (matriarch: Julie Walters).

It’s funny, sexy and sad, with two extraordinary central performances, and your whole aim in life after watching it will be to go disco dancing with Annette Bening and Jamie Bell. 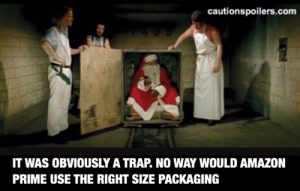 I truly love Christmas, though the somewhat misnamed festive season can be a pretty dark time – there’s a reason everyone gets divorced afterwards, and that the big guy’s name is an anagram of Satan.

Just ask any mum getting up at 5am to stuff a turkey no one likes. Then opening a measly three presents, the highlight being a Dove gift set from Boots.

So this bleakly funny, but played straight movie from Finland ticks a lot of Christmas boxes for me: it’s got an evil Santa, elderly, naked elves who look like members of ZZ Top, and lots of lovely jumpers. Plus a small boy who goes out in the snow in just underpants, wellies and a sweater, and if like me you have a small boy you have probably dealt with this scenario yourself.