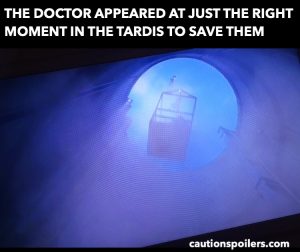 This is a 1996 film with a plot that wifi has rendered rather obsolete, a bit Like Home Alone which would never have worked if we’d had mobile phones.

It’s about two very attractive people running away hand in hand from ugly people in the snow, I mean a scientific team discovering how to produce clean energy from water. But beyond that I have to say for most of it I had no clue what was going on.

Morgan Freeman is in it, playing scientific project head Paul Shannon, and I was never quite sure if he was a good guy or a bad guy. I’m not sure if he even knew actually.

Keanu Reeves looks massive as he’s wearing one of those vast 90s leather jackets which is far too big for him throughout the whole movie, plus it’s freezing so they’re all in a million scarves and about 85 sweaters.

His co-star is a very young-looking Rachel Weisz. At one point she’s in a hot bath fully-clothed with Keanu perched on the edge (she’s got hypothermia after a freezing river dip during one of their hand-in-hand escapes). Getting into baths fully clothed, with Keanu Reeves in close proximity, seems to be a thing for Rachel (she did it the year before in Constantine as well) though they never actually do anything – the sexual tension between them over the last 20 years must be driving them completely crazy.

Student machinist Eddie Kasalivich (Reeves) and physicist Dr Lily Sinclair (Weisz) are part of the University of Chicago hydrogen energy project aiming to find the holy grail of cheap power, by producing clean energy from water. Two senior scientists in their team, Alastair Barkley and Lu Chen, try to upload their discovery to the internet to share it with the world.

If it happened today, they could just tweet it in a second with a link to a Facebook post and maybe put up an Instagram-filtered photo of Eddie in his multiple scarves, and Lily in dungarees, peering at test tubes and it’d all be in the public domain in an instant. Then Buzzfeed could do a list of Eddie’s cold weather clothing headlined “The Internet is literally losing its shit over clean energy scientist Eddie’s enormous coats and scarves!” And Lily would be told she was a bad role model for young female scientists by being simultaneously too thin and too fat.

But this was 20 years ago and they probably had to unplug the landline then switch on a dial-up modem and wait while it made all those funny noises and it would’ve kept cutting out if it was raining or if they were uploading anything to the World Wide Web bigger than about 200kb. (That bit is not a joke, kids.)

Anyway they don’t manage to upload it because, well, 1996. After celebrating their successful experiments, Eddie takes Lily home and leaves her inebriated on her bed then, as he leaves, checks out the awards and certificates on her wall that are so academically impressive he actually says “Woahhh!”. It makes me rather wish I’d worked harder and got more than a 2:1 honours degree, which would probably elicit merely a lower-case “w!” from the man himself.

When Eddie returns for his motorbike there’s no sign of Chen in the lab, Alastair is inexplicably dead with a plastic bag over his head, and then there’s a massive explosion that levels the local area.

The next day Lily receives a fax supposedly from Chen – she realises she’s being framed, as it’s clearly not really from him (my kids do this to me a lot but I fall for it every time. “Dere Mummy give your sons a bazillion pounds and fifty-for donuts. love from the polees”). So after meeting with Shannon they leave by train (though they run off hand in hand first, obviously).

Next time they flee, holding hands, it’s across a frozen lake (maybe their hands are actually frozen together by now). They both get soaked and end up in an empty house trying to ward off hypothermia in the aforementioned bath. After escaping some intruders they end up surrounded by goons (the security heavies kind, not Peter Sellers and Spike Milligan).

They run off (you’re ahead of me now, aren’t you) yes, holding hands.  but while Eddie escapes Lily is captured and is taken to C-Systems Research. The FBI meanwhile are starting to think Eddie may be innocent after all – “make sure nobody shoots him!” says FBI Agent Ford (Fred Ward) but I really don’t think a bullet could’ve got through that massive leather jacket that he’s STILL WEARING.

Eddie breaks in disguised as a workman (well he’s wearing a big coat and a hard hat. Security at C-Systems Research, a company trying desperately to prevent a hugely disruptive technology getting into the public domain, doesn’t seem that tight really).

The company’s hydrogen reactor is failing so unsurprisingly Eddie and Lily are soon back to running down underground tunnels holding hands and eventually emerge on the surface looking ash-covered but still stunning.

And that’s basically it, they both get in a helicopter (“Dr Sinclair and I ride together!” he says – only you NEVER DO Keanu, in ANY OF YOUR FILMS with the divine Rachel) and fly off to be questioned. 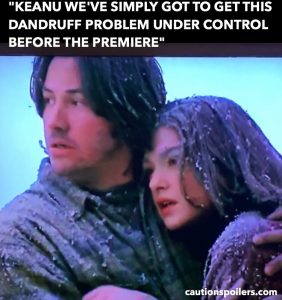 Dear god, if there had been a little less running around holding hands this movie could’ve been a whole lot shorter – it’s two and a quarter hours (!) and much as I love Keanu there’s only so much escaping through the snow while wearing an array of Gap knitwear I can take.

Unsurprisingly it’s all very 1990s from the huge coats (him) to the matt plum lipstick matched with plum knitted dress (her). Still, if you are, like me, stuck in that decade (clues – you still listen to Urban Hymns by The Verve, pin back your hair at the sides leaving a long strand hanging down on each side of your face, and you think eating a bowl of pasta and pesto the size of the Hollywood Bowl every night will make you thin) then this could be your ideal night in.