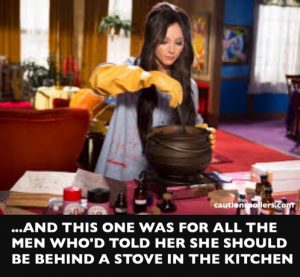 “Who ARE you?” asks Richard, married to Trish but besotted with Elaine who is lying semi-naked beneath him. “I’m the Love Witch!” she exclaims, “I’m your ultimate fantasy!”

Women have long been lusted after and feared in equal measure by men, for their feminine wiles that seem able to tempt, disarm then emasculate (which is to many as bad as killing) the most masculine of men.

And Elaine is the embodiment of everything men fear and adore about women, with added spells, potions, candles and naked paintings – plus a long black shiny wig that perfectly covers her boobs when she strips off dress, stockings, suspender belt and bra, which she does with great delight and faster than you can say “hocus pocus”.

If you’ve ever cast a love spell then got so annoyed with the resultant neediness when it actually worked that you had to murder the recipient, then The Love Witch will speak to you. And even if you haven’t, please watch it as it’s a brilliant film. By turns funny, warm, retina-burning, shocking and jarring, and like its subject astonishingly gorgeous to look at, it is the story of Elaine (Samantha Robinson), a witch who has pitched up in a new town after her husband divorced her then mysteriously died.

Moving into an apartment owed by her friend Barbara, Elaine is shown round by interior decorator Trish (Laura Waddell). If Elaine’s body was created for 60s and 70s fashions, Trish’s was perhaps moulded for a curvier age. Slightly lumpen in the too-tight trousersuits and frilled blouses that she prefers, her hair neither cutely short and sexy nor long and richly luxurious, she seems even more awkward next to the effortlessly sensual Elaine.

Trish takes Elaine to the women-only Victorian Tearoom, a fabulous place where I want to go immediately. Decorated in shades of cream, pink and white, its female patrons tone beautifully with the colour palette in their pale frilly dresses and enormous pink hats garlanded with lace and flowers. There’s even a harpist in the corner. The cakes look deliciously indulgent, huge confections of white plumpness occasionally drenched in a blood-red sauce. It’s here that Elaine explains to Trish her views on love and relationships.

“You have to give a man his fantasy”, she declares, in the manner of a Stepford Witch. “Men are like children, they’re very easy to please, as long as you give them what they want”. But she is simultaneously casting spells and brewing love potions to make them fall in love with her. Still very damaged from her marriage to Jerry, Elaine is clearly desperate to fall in love and this time be in control: “I understand men so much better than I used to. If only I’d known before what I know now!” she says.

Soon Elaine is bewitching university professor Wayne (Jeffrey Vincent Parise), the embodiment – with his big white teeth, neatly trimmed beard, long hair and jeans – of the worst kind of 1970s sexist literature professor, moaning about not being able to find the right woman as “all the bright ones are homely and don’t arouse me”. Poor Wayne makes the age old mistake of taking an unknown woman to his cabin in the woods, a trip which, by the time Elaine has finished with him, he will never make again. Still, what a way to go.

Next on Elaine’s Love List is Trish’s husband Richard (Robert Seeley), followed by Griff the police sergeant (Gian Keys) who is on her trail once Wayne’s disappearance is reported.

Elaine herself is narcissistic, immoral, and ungrateful (when a bar full of thuggish men turn on her shouting – in an echo from down the ages – “burn the witch!”, she is rescued by Griff, and sorry but they don’t end up living happily ever after).

Despite this she is a sympathetic character rather than a scary one, though I would say that, as it’s not me she’s trying to kill. She has no morals about trying to captivate anyone who already has a wife or a girlfriend, but she is rather childlike in her sudden dislike of these men and what she’s turned them into when they become incredibly needy.

Any campness or knowingness is disarmed by Samantha Robinson’s total embodiment of Elaine. There are no winks to camera, and everyone plays their roles completely straight. I only laughed with, not at, The Love Witch. Even when she comes out with lines such as “I’m addicted to love!”, which would usually see me slick on some more red lippy, grab a guitar and break into the Robert Palmer song, Elaine is completely believable.

The film looks extraordinary. Unmistakably 60s and 70s, every scene is drenched in colour and wonderful attention to detail: Elaine’s little red dresses and over the knee boots; the chain smoking; even the first scenes where Elaine is driving along the coast in a sports car with a clearly pre-filmed background, like in 60s TV serials. The props are detailed and highly covetable. Who doesn’t want a pentagram rug? Or a spell book? Her make up – blue and green eye shadow and thick black winged eye liner, with glossy pale pink or red lips, is enticingly suggestive.

There are a couple of things set up to deliberately jar. The Love Witch is actually set in the present day, with little unexpected details giving that away, jolting us out of our vintage love fest. Something else that jars is the staginess of the dialogue. The actors sound at times – deliberately, of course – like they are in a play, announcing lines to an audience rather than having a conversation. It’s so Shakespearean that when Elaine and Griff, in their matching beige jodhpurs and crisp white shirts, come across a medieval fair in the woods, complete with singing damsels, jesters, and a mock wedding involving white and gold outfits and crowns, I was half-expecting a British National Treasure to come striding out slapping his thigh and singing “hey nonny nonny” while someone else wandered by wearing a donkey’s head – like in one of those outdoor stagings of A Midsummer Night’s Dream that clog up the parks of leafy middle class towns throughout the warmer months.

I loved the idea that every town has its own black witches and white witches, and has had since forever. Elaine isn’t just a lone sorceress. Her friends Barbara and Gahan run a coven where everyone gets naked and then tries not to sit too close to the fire, and there’s a lovely shop selling witches’ herbs and spell-making products. Witchcraft has rescued Elaine: “Witchcraft is my religion… and this religion which is older than your Christianity saved my life” she tells Griff.

Anna Biller is The Love Witch’s writer, director, producer, editor, and creator of the costumes and the sets. In fact she has so many credits at the start of the film it might as well have simply said “Almost everything done by Anna Biller”. This of course is why the film is never sidetracked by anyone else’s vision, and we get a depth of richness I’ve rarely seen elsewhere.

The Love Witch certainly isn’t a film you will easily forget, and it’s one I could watch again and again (in fact I bought it this morning having seen it at the cinema last night). Elaine’s witchery clearly doesn’t just capture the hearts of the men around here.

buy / rent the love witch on amazon video or dvd or blue ray on amazon.com