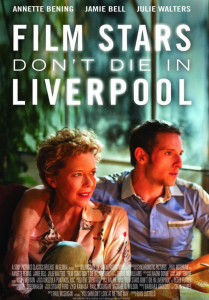 In any 1970s-set movie, it’s easy to rely on the obvious props (though actually wallpaper was hideous, kitchens were green Formica and TVs were fat boxes that you had to walk over to if you wanted to watch another of the three available channels).

But often it’s tiny background details that most sum up a decade or a lifestyle. The two pints of bitter in the pub costing (and I have already done your crying for you over this), 90p. The solid red lipstick in a gold case. And at the very back of a scene, the bowl of clingfilm-covered leftovers being carried out of the back door as the Turner family and Gloria Grahame’s son Tim, in the green Formica kitchen with the terrible wallpaper and boxy telly on the side, work out the details of his mother’s return to New York before she dies.

Peter Turner is also an actor, and at one point Grahame tells him that the best acting advice she ever got was from Humphrey Bogart: “stay in the shadows Gloria, and let the camera find you”.  In the best moments of Film Stars Don’t Die In Liverpool, that’s what Paul McGuigan’s film does, aided by two funny and hugely affecting performances from its stars, Annette Bening as the mercurial Gloria and Jamie Bell as her much younger lover, Peter.

“It’s time to let her go, love” says Bella (Julie Walters), to her son during that same kitchen conversation, about the woman dying of cancer in their spare bedroom in a Liverpool terrace. Bella isn’t just talking about America, but that’s where Gloria does go, looking every inch the film star in her fur coat, headscarf and enormous shades, even as she has to be carried into the waiting taxi in a family dining chair. Peter can’t go with her, and his face as he pushes his hands against the outside of the taxi window is utterly bereft.

All of this happens at the end of this true story about Gloria Grahame’s brightly-burning relationship with Peter Turner in the late 1970s, and her return to his family home a couple of years later after she falls ill.

It’s a story told in a non-linear way and from different perspectives. Peter walks from the hallway of his mum’s house in 1981 out into the bright sunshine of California’s LAX airport a couple of years earlier, to be met by his dazzling girlfriend.

When she returns to their New York apartment after lying to Peter about where she’s been, resulting in a huge fight, that whole morning is replayed later, entirely from her point of view. Gloria’s not been with her agent as she claimed, but with her doctor, who tells her the cancer has returned. Back in the apartment, her constant hair ruffling as she shouts and cries at Peter takes on an entirely different meaning once we’ve heard her explain to her physician that she never had chemotherapy the first time round because she would have lost her hair and “I can’t work without my hair”.

Bening is extraordinary and ordinary, deftly balancing the complexities of Gloria’s personality, and as with many Hollywood stars we aren’t ever sure if they became legends despite or because of them.

Gloria is luvvie-needy about her looks, and sometimes unrealistic (I am all for roles for older women but anyone playing Shakepeare’s Juliet is going to look too old if she’s the wrong side of 20); though Peter entirely fails to understand how vulnerable the ageing process can make a beautiful woman feel. She reacts furiously to some of his quips about her age, and she’s right to do so (I am 46 though). But she is also gleefully aware of the “Hollywood horseshit”.

She’s a mix of naivety and knowingness, humility and vanity, used to the ups and downs of her profession. About a one-man-play she says “I love those things, you get to say all the lines”. Gloria’s star has waned and it’s only when a barman recognises her that Peter finds out she won an Oscar. But she’s perfectly happy in her large trailer home, that opens out onto a beautiful California beach and a clear blue sea.

When needed, Peter’s family envelopes Gloria in the familial equivalent of a shiny eiderdown and a Teasmaid. Bella loves Gloria but isn’t starstruck. And when Gloria arrives back at their house, Bella’s typically Walters-esque line that if she’d had warning “I’d have put the electric blanket on”, becomes more poignant when we then hear her say anxiously, almost under her breath, “it’s freezing up there…”. Bella wants to mother everyone, even Hollywood stars.

Some things are left unexplained. Does Peter know about her earlier breast cancer? She has a scar on her breast but he’s still blindsided by news of her illness. And a dinner in California between Peter, Gloria, her mother Jeanne (Vanessa Redgrave) and her sister Joy (Frances Barber) drips with unexplained bad blood between the siblings.

This is a genuine love story, and that comes across (as it should) in the love scenes and arguments. Wow, do they known how to wound, and twist the knife. “I’m not surprised everyone fucking leaves you!” Peter screams at her, while she’s happy to make digs about his lack of acting success.

It’s a funny, sexy and sad film. Watching Gloria and Peter disco dancing round her Primrose Hill digs together when they first meet in 1979 is a joy, and their unfolding relationship mimics a witty, sassy dance, as she expects him to fancy her and he thinks he has the upper hand as he’s so much younger. And as Gloria weakens I don’t know who cried more, me or Peter.

available on vod, blu-ray and dvd from amazon.com

available on vod from amazon uk

available on dvd and blu-ray from amazon uk

Watch the trailer for Film Stars Don’t Die In Liverpool: