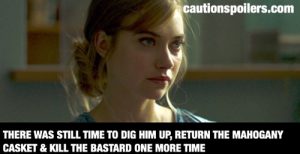 It’s rare to find such a perfectly poised thriller as Sweet Virginia, where every character is so beautifully frayed by the realities of life and relationships.

Almost everyone is at least slightly broken, and makes stupid mistakes. There is no saviour riding into town to save the day, and right to the end the story could go either way.

It’s a film strewn with intermittent moments of rage that are often brutal but never exploitative, and sometimes the tension is almost unbearable; at one point I realised I was sitting with my knuckles in my mouth.

In a forgotten working class town, nestling amid imposing snow-covered peaks while long goods trains snake around the base of the mountains, three friends are gambling in a bar after closing time. A stranger walks in, is ordered to leave but returns a few minutes later, shooting them all dead.

It’s a savage scene, dark and greenly lit, soundtracked to jarring noise that is almost music and which reappears throughout the film to signal something terrible (once that music started I was constantly agitated, as characters stood with their backs to a door or a window).

Only at the very end does the music transform into something melodic and almost orchestral. Which is fitting for this cold outpost where functional buildings and beaten up trucks cower beneath a soaring, never-changing landscape; and the outdoor light has that washed-out look you get in northern outposts where the sun is barely yellow, fighting a losing battle with wintry greyness.

Sam (Jon Bernthal) runs a motel now, after a successful career as a rodeo champion. He is a natural protector of women, but he is also something of a broken man himself. His rodeo years may have given him adulation but they have also left him with a limp and early onset Parkinson’s Disease; his hands tremble and he often stands there rubbing them over and over each other.

And while Sam looks imposing and the kind of man you’d feel safe with, when he has to get involved in conflict he lowers his head and appears almost submissive. Possibly because of vulnerability from his health problems, though he’s old enough and wise enough to know that charging in isn’t the best way: “never underestimate the power of generosity” he says, and though he’s talking about his rodeo years it could also be that he wants to give people a chance. At times though, like when he’s dealing with a thug in the often-complained about Room 128, this seems misplaced.

And Sam seems to have more heartbreak in his past than simply the death of his career. Proxy-fatherhood looms large, and later, in a throwaway line, we almost find out why.

So thank god he’s got a nice woman to snuggle up with, even if his long-term lover Bernie (Rosemarie DeWitt) is the widow of one of the victims of the shooting.

The killer, Elwood (Christopher Abbott, astonishingly good) hides in plain sight, taking a room at Sam’s motel, but he immediately makes Sam nervous. The young man talks too much, crossing boundaries instantly. “Are you a Nazi?” he asks of the placid and upstanding Sam, noticing a German gun on the wall, taken by Sam’s grandfather off a soldier during the war.

Later Sam sees Elwood again. “Shit” he says under his breath, as Elwood is the kind of boy no one wants to have to talk to, but the older man still agrees to go to a local diner with him. Elwood tells him his parents are dead, so maybe it brings out more of those feelings of fatherliness in him, and, well, they are both from Virginia. But their staccato relationship is a terrible idea and I would never call it friendship.

Lila (Imogen Poots) is another widow from that bar; after a miserable marriage to Mitchell she hired Elwood to kill him. But her youth and naiveté mean she han’t foreseen that these things have a habit of unravelling. Meeting Elwood after the funeral on a wooden bridge over a noisy waterfall, Lila is accusing about the other deaths in the bar though confident about getting him his payment.

But it’s hard not to feel sympathy for her as it turns out killing her husband is not Lila’s route to freedom, and the scene where she’s in the lawyer’s office to dot the ‘i’s and cross the ‘t’s on Mitchell’s will and insurance policies is heartbreaking.

Most of the time the camera is only on her face, as the lawyer intones the truth about her husband’s supposed entrepreneurship. It’s a harrowing performance from Poots, as Lila’s face moves from lack of comprehension that the monster she married has not only abused her, but played her, to the appalling understanding that she has nothing: “I still need to make a payment on the casket, it was solid mahogany. I can’t give that back!” she cries. She also has no way of paying Elwood, a man not given to charitable responses. (At this point I would have happily dug up and re-murdered Mitchell myself.)

The sociopathic Elwood is one of the most terrifying men I’ve seen on screen in a long time. He is a violent, unappeasable thug, and anything can set him off. His grip on reality, already tenuous, soon loosens beyond the point of no return, and his rage when it uncoils itself from his randomly-firing brain is unpredictable and bloodily savage.

The women are subject to extreme violence but in director Jamie M Dagg’s hands they are never filmed exploitatively.

And believable relationships between two middle-aged people like Sam and Bernie are always welcome. Bernthal is extraordinary as a man trudging stoically on, carrying a heavy emotional load while trying to look after everyone else.

This is a dark and relentless film. The ending leaves some loose ends with the potential to unravel – like the local characters it portrays.