You are here: Home / Film Articles / Comfort Blanket Movies For When The World Is Going To Hell In A Handcart (i.e. Now) 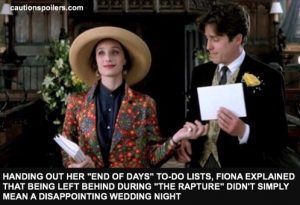 The world is pretty dark right now, but once you’ve filled your understairs cupboard with cans of baked beans, plus that Long Life UHT milk that come the Apocalypse no one will actually drink (“things are bad enough, I’ll have that cold coffee black if you don’t mind”), you’ll need something to fill the time before the next “I can’t believe they just did that” moment.

So what better way to spend your time before it ends with some “comfort blanket” films? These are the movies you reach for when you want something familiar to watch while you sew your own HazMat suit by the light of a homemade candle.

Just don’t turn them up too loud, you need to be able to hear that air raid siren over the top. These are mine, along with the exact type of blanket I need to snuggle up into while I watch them:

1 Four Weddings And A Funeral

I absolutely have to include this as it has the marvellously brittle Kristin Scott Thomas as Fiona, peering out haughtily from beneath her huge hat, while secretly eternally in love with Hugh Grant. And who hasn’t done that at a wedding? (Hopefully not your own). Faced with Kristin’s icy stare, the End Of The World would simply grind to a halt as she told us all to STOP BEING SO FEEBLE. This film is hilarious, and also quite sad, but with the best array of hideous wedding dresses you’ll see outside of reality TV to cheer you up.

Type of blanket – in honour of the fabulous Fiona, this is my cashmere throw film. Elegantly fashionable, luxurious and expensive.

For some reason this is my in-the-background-for-company, ultra-violent revenge thriller of choice. There’s not much dialogue and though the sound of gunshots interspersed with the odd Keanu grunt should be painful, it is actually rather relaxing – like a really hot bath that doesn’t seem nearly so hot within two minutes of climbing into it, even though your skin is peeling off.

Type of blanket – a bulletproof one that you can wrap yourself in, before shrieking in a slightly muffled voice from inside “Yeah I’m thinking I’m STUCK!”

“Nice beaver!”  “Thanks I just had it stuffed.”  Based on the brilliant but sadly short-lived TV show Police Squad, a Leslie Nielsen movie that you are sure to be able to quote far more of than you realised. Laugh and hopefully the whole world will laugh with you, rather than try to kill you. There’s also a sequel, Zombeavers, where the stuffed, goofy-toothed furball’s pals exact their revenge. (it isn’t really).

Type of blanket – one full of holes, gnawed by beavers obviously.

JUST what we need as we face nuclear annihilation – private healthcare! Well, a medical pod kept secret from the crew where you can conduct any medical procedure. Archaeologist Elizabeth Shaw hijacks it for her own baby-alien-removing abortion, then, shortly after is able to:

After my caesareans I wasn’t even allowed out of bed for 24 hours – and I’m the kind of girl who will usually roll across a hospital floor, drip and tubes flailing, to get to my make-up bag and hair straighteners.

The plot of Prometheus is confusing even after umpteen watches, the characters bicker constantly, no one apart from Captain Idris Elba seems to understand that it’s CHRISTMAS which is, you know, about peace and goodwill and shit, and we were told it wasn’t an alien prequel when it has an alien in it and is quite clearly a prequel. But I still adore it.

Type of blanket: The stinky, polyester, slightly itchy blanket that no one else likes but inexplicably you love.

If you think we’ve got it bad, just be glad we don’t have to deal with dragons. Woken from their millennia of sleep by an extension to the London Underground (sometimes I wonder if the film was financed as propaganda to stop people demanding Tube improvements) the dragons have burnt and eaten everything in their path and the human race is now a raggle-taggle of disparate groups around the world, all presumably helmed by sexy Hollywood stars.

Luckily Christian Bale and Gerard Butler – in their matching army-issue blue sweaters – have survived in a Northumbrian castle where they not only grow crops and kill dragons, they also cosplay Star Wars for orphaned children. Seriously, if this is the Apocalypse, count me in Gerry!

Type of blanket – something from Army Surplus.

Silly but brilliantly funny and eminently quotable, though – as it’s the end of the world – that’s not important right now. If you can, try and watch it with someone called Shirley. It may be her last chance to tell people not to call her Shirley.

Type of blanket – a Slanket. Basically it’s a blanket with sleeves or, as we oldies call it, a big sweater. Once it’s on you can’t really move without falling over so you have every excuse to stay put on the sofa while your small slaves fetch you those Custard Creams you’ve been hoarding.

There’s something reassuring knowing how a character is going to get killed, but that Ripley will triumph in the end. Again. Weirdly the more I watch them, the more they morph into one and I probably couldn’t tell you – without reference to Ripley’s shaved head, or Newt and her doll – which scene was from which film. BUT THAT DOESN’T MATTER.

Type of blanket – one you’ve had for about 30 years and which started off really uncomfortable but now it’s been washed so often it’s softer than a baby bunny in a bowls full of marshmallows.

Fitting, somehow, in a world beset by conflict between religions, all of which seem to urge us to love thy neighbour, to watch this as society collapses. Thanks to the rise of identity politics, a lot of its jokes have gone from parody to beyond parody in the years since it came out to cries of “blasphemy!”. The People’s Front of Judea vs The Judean People’s Front could be many special interest groups fighting each other while the world burns around them. (Next time you watch it, check they haven’t had to remove the references to cheesemakers to avoid offending the lactose-intolerant.)

And who hasn’t wanted to tell [insert name of scary narcissistic world leader of choice here] that he’s not the Messiah he’s a very naughty boy.

Type of blanket: a huge beige or brown one you can swathe your entire body in for the “Are there any WOMEN here today?’ stoning scene.

9 An American Werewolf in London

If I ever worry about the bad decisions our political leaders are making, I just think back to this film and the umpteen warnings not to go on the moors after which the two boys immediately and inexplicably decide to go on the moors. The transformation scenes still look terrific and it’s from an era where horror films weren’t nearly so self-referential. Plus it’s a useful warning that if we head to Yorkshire during the end of the world it might be a case of out of the frying pan into the fire.

A classic example of what happens when Mankind gets too big for its boots. Life will find a way, quite often with a dinosaur ending yours. The presence of the two irritating youngsters also act as a reminder for me that life as society breaks down will involve lots of fighting, shouting, and hoarding of resources, and that’s before me and my feral children even come across the opposition.

Type of blanket – something your ancestor knitted 4 billon years ago that was recently found preserved in a huge lump of amber in a mine somewhere in South America.

Let me know your comfort blanket films in the comments. And if you’re desperate to watch any of these ONE LAST TIME you can order them below.