You are here: Home / Film Reviews / An American Werewolf In London 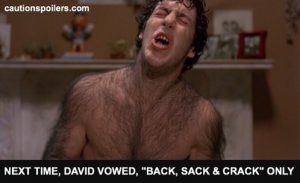 There is, apparently, a remake planned. I don’t usually mind remakes – the original film still exists, after all. And at least with American Werewolf In London mobile phones haven’t made the plot obsolete (you think I’m kidding? Have you ever tried getting a phone signal up on Britain’s remotest, werewolf-ridden moors?). But if you haven’t seen the superb 1981 classic, check it out as soon as you can and definitely before watching any reimagining, or reboot, or straight up pointless scene-by-scene remake.

, or buy An American Werewolf in London [Blu-ray] [Region Free]

Or Amazon.com Video, Blu-Ray or DVD An American Werewolf in London

Americans Jack Goodman (Griffin Dunne) and David Kessler (David Naughton), two young college backpackers, climb out of a sheep trailer on the North York Moors, having hitched a lift with – frankly – the friendliest local they encounter their whole time. Warned not to go onto the moors, they walk to a nearby village as it gets dark and go into the Slaughtered Lamb pub to warm up and enjoy a drink.

As has passed into movie folklore, the whole pub falls silent as they enter. With no food on offer they order hot tea but soon put the locals’ backs up by asking about the five point star in the pub. Sensing barely contained hostility the men decide to leave, but are warned (again) to stay off the moors and stick to the road. Oh and to beware the full moon. And did I mention stay off the moors?

‪Out in the darkness they forget how many people have warned them to STAY OFF THE SODDING MOORS and wander – you’re ahead of me here, aren’t you – off the road and onto the moors. They soon hear howling, which is so loud and bone-chilling that Jack’s “Listen! Do you hear it?” is somewhat unnecessary.

The sound gets nearer and as they try to run, the two are attacked by a huge creature. Jack is mauled to death – David is clawed but runs away, leaving Jack to his fate. Locals from the pub then appear, and shoot the beast dead. Three weeks later, David wakes up from a coma in hospital, where he receives a level of one to one care from Nurse Alex Price (Jenny Agutter) rarely seen even then in our cash-strapped NHS.

David has arrived at hospital with his wounds already dressed, and the story being put around is that an escaped lunatic is to blame. But David tells anyone who’ll listen – particularly Dr Hirsch (John Woodvine)  – that is was a dog or a wolf. As David recovers his nightmares begin, and then his dead buddy Jack starts visiting him. Funny (“Have you ever talked to a corpse? It’s BORING!”) but resolute, he explains to David that David has to kill himself as he is the last of the werewolf bloodline – at the next full moon he will transform, and kill people. David doesn’t believe Jack, who continues to visit after he’s left hospital, each time in a more disgustingly advanced state of decay.

David moves in with Nurse Price who for some reason tells us how many people she’s slept with but in a less entertaining way then Andie McDowell’s “less than Madonna, more then Princess Di” in Four Weddings And A Funeral. They almost instantly have sex in her shower, though it is a very British shower scene as the shower is so tiny they can only really stand there, him looking a bit dazed (I bet he wasn’t expecting this level of assistance from “Socialized Medicine”) while she kisses his shoulder. Over and over and over and over and over again. SO MUCH shoulder kissing I’m trying to remember if it was a thing back in 1981.

The next evening Alex is at work and the moon is full.

The brilliance of David’s transformation into a werewolf is not just the make up and prosthetics, but the agony that is so clearly displayed. (His visibly stretching feet took me back to my own painful teenage years where my feet seemed to grow a size every two weeks and ended up about as big as the werewolf’s though thankfully without the hairy toes).

Completely transformed, he then starts his killing spree. Like a bridegroom after a particularly great stag night, David wakes up the next morning naked in the London Zoo wolf enclosure with no memory of what has happened.

American Werewolf in London is an absolute classic, and like that other cult film Tremors it still looks and sounds fresh. The dead always seem to have the best lines and that’s certainly true here, as Jack visibly rots but continues to stalk David to prevent further bloodshed and end his own suffering.

The chemistry between Jenny Agutter and David Naughton isn’t exactly explosive, and their love scene seems surprisingly half-hearted, though as she works long hours in the NHS and he’s just been let out of hospital we can forgive them for not swinging from the chandeliers.

It’s hard to overstate the impact this film made. From Rick Baker’s incredible special effects as David actually transforms before our eyes that still look amazing now, to the Slaughtered Lamb pub and the silence falling over its customers as the two Americans walk in, to “keep off the moors!” given to them as a warning by more than one concerned-but-not-quite-concerned-enough local.

Add in to the mix a youthful Jenny Agutter, the thinking man’s crush of choice back then, and it’s a heady mix that is surprisingly un-anachronistic even now. Quite apart from the mobile phones issue, no way could Nurse Alex afford to live on her own in a cute Victorian one-bed in London today.

, or buy An American Werewolf in London [Blu-ray] [Region Free]

Or Amazon.com Video, Blu-Ray or DVD An American Werewolf in London