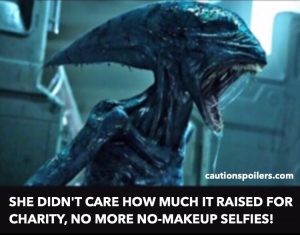 I don’t know why this was marketed as “not really a direct Alien prequel”, what with it having an alien in it and being set before the other Alien films.

There’s also an ambivalent android (David), and a dodgy company (Weyland Corp, precursor to Weyland-Yutani). Apart from no Ripley, this film is pretty much Great Grandma Alien.

The impressive opening sequence takes us back to the beginnings of humanity on Earth, as a giant humanoid sacrifices himself over a huge waterfall (it was filmed at the Dettifoss waterfalls in northern Iceland), his DNA seeding the planet as his body disintegrates in the water. It’s a lonely, blue-grey scene, but also breathtaking, and open.

After this, as archeologists and scientists head to the stars to track down these originators of mankind, all is terrifying claustrophobia and often darkness, and that familiar sense of being trapped in a nightmare with an unknown assailant.

Prometheus ends with a very familiar looking alien, not identical but clearly of the same alien family, forcing its way out of another Engineer. The story in between is a tale familiar in many ways, and not just because of the xenomorph we know and love but because of what it says about mankind’s hubris – maybe it is in our DNA after all.

The Prometheus itself is a spaceship, travelling on a mission to discover the origins of Man, after two archaologists, Elizabeth Shaw (Noomi Rapace with a very odd English accent) and Charlie Holloway (Logan Marshall-Green) convince Weyland Corp to fund the trip.

Decades before Ellen Ripley tries to prevent her crewmates breaking quarantine, the icy, driven project head Meredith Vickers (Charlize Theron) refuses to allow an infected Holloway back on board – standing on the boarding deck wielding a flamethrower.

Shaw, after she and Holloway find cave paintings depicting giant beings, or Engineers, meeting humans over the centuries, has long been convinced these humanoids have been benign visitors. She’s highly religious and shuns weaponry, and her story is a baptism of fire. She eventually ends up performing major abdominal surgery on herself to remove an implanted alien embryo before heading off across space with an android head for company, to find the Engineers’ planet and discover why they created then tried destroy mankind.

The existing scientific crew are mistrustful of the two storytelling outsiders, though they’re forced into grudging acceptance when they reach the planet and it becomes clear that the formations they find could only have been constructed, rather than created by nature.

It’s quite a large crew, and not everyone stands out. Prometheus‘s pragmatic captain Janek (Idris Elba, terrific but underused) is a man whose first priority on coming out of stasis – while tough old Vickers is doing press-ups – is to have a cigarette and put up a Christmas tree. (An alien film without smoking would be like James Bond without a martini.)

Michael Fassbender’s android David is highly ambivalent, brilliant and able to delve deep in to the mysteries of the Engineers and the puzzle of what they’ve left behind because he has no morality. Yet at the same time he resents humanity, an inferior species who nevertheless created him.

The structure they find contains breathable air and ancient stone vases filled with a strange gloopy liquid. The body of an Engineer lies where he was decapitated by a closing door thousands of years previously. Shaw takes the head back to the ship with her, where in an extraordinary scene they reanimate it; Kilburn and Fifield, biologist and geologist respectively, get lost and have to remain overnight when a storm prevents them returning to Prometheus.

A snake-like creature that wriggles into Milburn’s spacesuit and kills him, while Fifield falls into the mysterious liquid.

Smuggling one of the vases onto the ship (how he got it past Vickers is anyone’s guess. It’s not like people are likely to buy her flowers very often), David tricks Holloway into drinking it. It’s weirdly compelling watching Holloway’s deterioration, and the attacks on, and deaths of, other crew members – will there be facehuggers? Xernomorphs? How far are we in the past compared to Ripley, again? (2093, with Alien‘s events taking place in 2122, actually.)

Alien is often called a traditional haunted house mystery and while Prometheus has a wider setting (the structure, the planet’s surface, the ship itself) it is very much about seeing people picked off one by one in various horrible ways. There are heroic suicides, cowardly escape attempts, and a satisfyingly evenly-matched Alien-Engineer fight, before Shaw manages to escape with David’s rather chatty head in a manbag.

Guy Pearce (sorry, he could win 10 Oscars and he’ll still be “Mike from Neighbours” to me) plays Peter Weyland, CEO of Weyland Corporation. He is old, and dying, and not left at home at all, but on the ship. He is, in a way, David’s father. Is he also Meredith’s? It makes her behaviour more interesting, if she and David are in some way squabbling siblings.

The hubris of a man who creates an android also drives him across the universe so he can ask the founders of mankind how he can be saved from death himself. Pearce is suitably doddery, and arrogant as the aged Weyland, through I’m not sure why they cast him. There are plenty of older actors who could have performed the role well, unless there is footage of Pearce playing a young Weyland somewhere on a cutting room floor.

As a prequel (yes of course it is!) Prometheus is effective and often thrilling. It has its own perfectly good standalone story, and its own heroine, and enough tweaks and subversions to make comparisons fun and fascinating (because director Ridley Scott knows full well we’ll be comparing). The interesting comparisons between characters are Vickers and Ripley, not Ripley and Shaw. And perhaps not David and Ash, the android from Alien, but David and Burke, the human but backstabbing Weyland-Yutani employee from Aliens (was he too an android?)