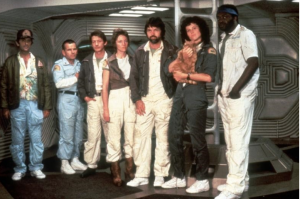 *** click down for two film clips, the trailer and images ***

The Nostromo, the towing ship pulling a mining refinery, takes its name from the title of a novel by Joseph Conrad.

In the book, Nostromo the man is a tool of the rich, which neatly sums up how the company sees Ripley, Dallas, Kane, Lambert and the rest of its crew.

Now, 40 years after its release, director Ridley Scott has overseen a 4k restoration (and audio restoration) of the theatrical version of his film. (4k results in a higher, clearer resolution, with sharper colour and contrast).

And so it was I found myself, at 9am on the first Monday of the half-term holiday, in a London screening room – watching one of the scariest movies of all time.

At least, I joked, it’ll be less terrifying than looking after my own children this morning – though it turned out my kids aren’t so bad after all, in comparison.

Film loses quality when formatted for video and DVD, and I’d never seen the Alien theatrical cut on the big screen – so the restored version has a level of clarity and a crystalline sharpness quite different to my previous experiences. It’s a clarity that only makes it more frightening.

I’ve reviewed Alien before but this time I saw things that previously passed me by (or maybe we only see what we want to see at any given time).

Scott has woven several themes through this film and the franchise as a whole, but ultimately it’s a horror story, the stuff of nightmares – one of those true nightmares where you have no idea what’s after you.

In the later films it’s a familiar adversary, and there’s a pleasure in watching Ripley settling old scores against the only opponent worthy of her. But in Alien neither the audience nor the crew have any idea what they’re up against. And despite our knowledge of the later films, that feeling of being pitted against an unknown adversary is still overwhelming, as they’re stalked by the barely-seen xenomorph.

Class issues loom large. Engineers Brett (Harry Dean Stanton) and Parker (Yaphet Kotto), working down below among the pipes and machinery, know they’re getting a smaller share of the profits, and it rankles. The profit share also indicates that the dangers and boredom of these long voyages require extra reward, though the bosses will still try to divide and conquer the workers.

With the return of the alien to Earth turning out to be a pre-planned business decision, the crew seen as disposable, it also highlights the horror of a system where money is more important than human life.

Sex is everywhere, but there’s love too. 40 years on and I’m convinced Warrant Officer Ripley (Sigourney Weaver) and Captain Dallas (Tom Skerritt, sharing with A Star Is Born‘s Kris Kristofferson the accolade of hottest bearded man of the 70s) had something going on.

There’s a key moment in the medical bay as Ash, Dallas and Ripley try to find the facehugger (no longer attached to Kane’s face). As it descends onto Ripley’s shoulder, Dallas pushes her back against the wall and positions himself protectively in front of her with his arm across her body. It’s automatic but very telling.

The crew are in stasis when they’re woken up in a star system they don’t recognise. They’re supposed to be nearly home but Mother, the on-board computer, has received a distress signal. Heading down to the planet, Dallas, Executive Officer Kane (John Hurt) and Navigator Lambert (Veronica Cartwright) explore the surface and find a huge spacecraft – inside it an enormous humanoid, fossilised into its control seat.

It’s Kane who comes across the mist-covered eggs, with one bubbling away ready to pop. The facehugger melts through his helmet and attaches itself to his face.

Ripley, back at the ship, invokes quarantine regulations and refuses to let them on board – science officer Ash (Ian Holm) takes matters into his own hands and lets them in.

And sex leads to birth and motherhood. There are three mothers involved in this story and all are typical hands-off 1970s types, rather than the paragons of virtue we have to be now: Ripley, whose young daughter waits on Earth for her return; the computer, unswayed by pleading, happy to let the crew “cry it out”; and the Alien Queen who laid the eggs. We never see her (she doesn’t appear until the sequel, Aliens) but at some point she’s produced the eggs Kane finds – sending her babies off into the universe, fully equipped to survive anything.

Oh yes, the sex (or maybe we only see what…). It’s been said that the film is meant to teach men about rape, the forced impregnation. Though actually the women suffer too. That tail curving up Lambert’s leg before she dies, and Ash trying to choke Ripley with a rolled up magazine stuffed into her mouth. His violence is shocking; it takes the rest of the crew to save her.

And violent birth, as Kane is sacrificed for the baby inside him. They’re eating breakfast, and he seems fine, the facehugger gone, until he starts choking and shaking. The shock on his crewmates’ face is total as his abdomen is forced open and the baby alien pops out. It’s still a gamechanger.

They’re picked off one by one, but it’s a really slow process and Scott drains every droplet of hope from his audience as the tension rises in a crescendo. His camera lingers for an age on the crew’s scared, desperate, clueless faces, the semi-darkness only making it worse. And then the hideous grinning jaw appears, opening to reveal another hideous grinning jaw, the only light reflecting off its shiny black skin and viscous saliva.

As Dallas crawls through the air ducts hunting the alien, listening to his crewmates tracking its movements, his slow-burn terror expands to fill the cramped space.

Ripley’s survival seems like a reward for trying to do the right thing. She doesn’t want to let them on board when Kane is attacked. And she’s always been suspicious of Ash, the android working against them. She’s task-driven and doesn’t moan. And she went back for Jonesy.

Alien is a absolute masterclass in fear and stress, and seeing it on a big screen was just as terrifying as if I’d never seen it before.

And despite its allegories, at its core it’s a nail-bitingly frightening horror film about being tracked by an unknown cold-hearted killer in an inescapable environment.

A monster like us but worse, with every ounce of what makes us human – empathy, even if it makes us take bad decisions – stripped away. It kills for necessity and also for fun. Even the last few scenes are utterly relentless, as the alien, fired out of the airlock, tries to claw its way back in.

The 40th Anniversary of ALIEN was released in UK cinemas on 1 March and is also being shown in selected overseas territories – find out whether it’s showing near you.

Buy Alien in 4k from Amazon.com

The science bit! The film was restored in 4K in 2018 by 20th Century Fox at Company 3/Deluxe Entertainment Services Group, supervised by Ridley Scott and Pam Dery. The 4K scans were done at EFilm and the audio restoration was done by Audio Mechanics.

“It’s moving right toward you”:

Watch the original Alien trailer below, and scroll down for my Alien slider with images from the restored movie: