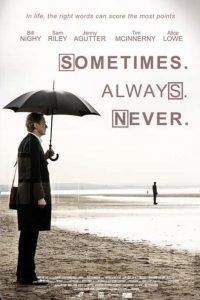 Finally, a story about the beautiful game that isn’t boring or dependent on stereotypical ideas of its players. Yes, I’m talking about Scrabble.

Set near Liverpool in the North West, director Carl Hunter’s delightful film is witty and moving – and beautifully written by Frank Cottrell Boyce (with whom Hunter has collaborated previously on the shorts A Winters Tale: Shakespeare Lives, and Grow Your Own).

It boasts a superb central performance from Bill Nighy as Alan, a quietly heartbroken father who has lost both his sons: one missing for years and the other physically present but seemingly unreachable.

His adult son Michael hasn’t been in contact since storming out of a Scrabble game several years before (anyone from a family like mine will see nothing remotely odd about this). Since then Alan has been endlessly searching, while his relationship with his other son Peter (Sam Riley), now married and a father, slides further into distance and scratchy arguments.

Alan is a retired tailor as well as a demon Scrabble player, and the title refers to whether the three buttons on a suit jacket should be done up or left undone, starting from the top button: sometimes, always, never (I’ll admit I never managed to get the title words in the right order until the film explained this to me).

His choice of career is certainly reflected in the story: his smart, bordering on pernickety appearance, and well-cut, structured clothes which act as a suit of armour.

Now Alan and Peter are en route to identify a body pulled from the sea that could be Michael. (Their drive through the countryside, in Alan’s ancient but sparkling red Triumph, appears to be in front of a backdrop, like in old movies. Anna Biller did something similar in the The Love Witch, which also has a retro look despite being set in the present day. It adds to the idea that this is a family which has paused itself and doesn’t know how to move on together.) Unable to view the body, they’re forced to stay overnight, in a hotel Alan had already booked just in case.

Games can be a distraction, or bring people together, but they can also be proxy wars (taken to its extreme in The Seventh Seal as Death plays chess outdoors with a medieval knight for the man’s soul, a scene I thought might have been deliberately referenced in a forest Scrabble game in Sometimes Always Never but according to Hunter isn’t!)

And as Peter points out, often Scrabble isn’t about the letters but the numbers. Alan knows plenty of interesting, high-scoring words but increasingly they’re being replaced by players with two-letter combinations, hopefully requiring the letter Q (10 points!) It’s no longer about the journey.

Do you know what an esrom is? Or a muzjik? I didn’t, though I do now. Alan, despite pretending to fellow hotel guest and Scrabble opponent Arthur that he’s a novice, is a human dictionary.

Nighy is brilliantly understated as Alan. He’s an exhausted man and quite disruptive, his comments designed to be abrasive as much as soothing, every word he utters considered for its value. He can be selfish. “It wasn’t him! I knew it wouldn’t be! All the best, then” Alan says, jaunty with body-flooding relief as he takes his leave of another couple, there to view the same body.

Arthur’s quiet and calm wife Margaret (a perfectly measured Jenny Agutter) and Peter’s wife Sue (Alice Lowe) are both peacekeepers in their husband’s battles, despite puzzles often being dismissed as a pastime for middle-aged women. Margaret smoothes over tensions between her husband and Alan by warning against looking up words. Once Alan is staying with Peter’s family, the bouncy Sue recommends the opposite. Very different performances, both are grounded and forceful, as each character manages their spouse, dissipating passive aggressive male competitiveness.

Alan whiles away the days at Peter’s playing Scrabble online. Every Scrabble player has their own identifying style, and soon Alan is convinced a stranger he regularly plays against is actually Michael.

The costume designer is Lance Milligan, who also worked on 60s-set Mad To Be Normal and 1970s slice of Northern life Dusty And Me. He’s exceptional at creating an aesthetically heightened world through clothes that fits into its time period yet manages not to stereotype the characters. The little worlds he creates help contain the emotional dramas that families are trying to work through.

Peter’s teenage son Jack starts borrowing grandad’s suits, his confidence blossoming as he pursues the bus stop girl of his dreams. Sue is often in colour-blocked or strikingly patterned clothes, where she seems to be harking back to her own past: short dungarees, little dresses.

It’s a colourful house, though much of the film is in shades of green: sage, teal, sea green, including the light that comes in through the windows. Even the closing credits song (by Edwyn Collins and Sean Read) is about colour.

Just listening to Cottrell Boyce’s dialogue will gladden your heart. Alan’s word fight with the increasingly annoyed Arthur is a masterclass, as gentle needling from one pushes another almost to explosive breaking point (it reminded me of the classic Blackadder dictionary episode when Edmund taunts Samuel Johnson with invented words he claims the writer has missed out of his huge tome).

There’s a lovely father-and-son conversation in Alan’s Triumph too, about the toys Peter had as a child, but always the cheapest versions. (I felt his pain, having received a Girls-World-that-wasn’t for Christmas in the early 80s.)

The design pulls you in to a world that’s slightly off-kilter, where a family that has pressed the pause button now has to find a way to reform itself whether Michael comes home or not. It’s beautifully shot by cinematographer Richard Stoddard (he also shot Bliss!, a film that moves from the North East coast to Scandinavian fjords), with glorious outside light whether looking over the sea and its pink dusk sky, or the rich green and gold of the forest.

Watch Sometimes Always Never and unless you are already Stephen Fry, or Susie Dent from Countdown‘s dictionary corner, you’ll come away with a game’s worth of words with which to dazzle your opponents. (And you’ll find out that you can’t use “jazz” in Scrabble, though don’t expect me to spoiler why.)