You are here: Home / Film Reviews / Mad To Be Normal 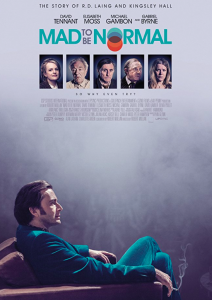 Charisma, Velvet and Paisley sounds like a 1970s prog rock album but it was actually my initial notes on Mad To Be Normal, director Robert Mullan’s account of the controversial psychiatrist Ronnie Laing, who believed mental illness should not be treated with drugs and was often simply a way for people to cope with the world.

Ronnie Laing sounds like the bell-bottomed guitarist from that made-up album, though he was better known professionally as RD Laing.

Laing was in fact friends with rock stars, and was treated like one – the film opens in a packed theatre as people wait to hear him speak, a giant black and white picture of himself as a backdrop. He looks like a fashionable vampire stuck in a wind tunnel, with his widow’s peak and dark, blown back hair. He seems to be speaking off the cuff, his mind elsewhere as he looks to one side to catch hold of memories about the people he’s treated.

I don’t know whether David Tennant, who plays Laing, is deliberately mimicking the real Laing’s mannerisms (I’ll admit that while I knew of Laing I also mainly confused him with Timothy Leary) but this one scene tells us so much about the psychiatrist. A thoughtful person with little time for niceties and who always puts his patients first, even if at times misguidedly so – but also a man who clearly enjoys the limelight, selfishly picking and choosing what and who to prioritise, while others pick up the pieces.

Mad To Be Normal follows Laing as he tries to balance an international fascination with his controversial ideas, with the running of Kingsley Hall, an experimental home for people with mental illness, and his personal life; and it’s his deliberate blurring of the lines between work and home that leads to the first cracks.

The residents live side by side with doctors including Laing, but no drugs are allowed. (It’s unclear how much of the film is based on real events and real people, beyond Laing’s well-known ideas and complex family life, though his daughter’s illness has been brought forward to her childhood. And I wouldn’t be surprised if his jaunty response to an American radio interviewer’s question “how successful are you?” of “there’s been no murders!” is true.)

Throwing herself into this mix, to what initially looks like bemusement from Laing, is American post-grad student Angie (a forthright Elisabeth Moss) who comes home with him after a liquid lunch of Chianti and never leaves – despite an early argument, after that first sex-filled afternoon, over his treatment of his children. She offers a researched-based idea that divorce harms them; he angrily retorts that he divorced their mother not them.

He already has several children by this stage, though he’s not a romantic: “love’s a terrible burden to inflict on someone” he tells her, though they still go on to have a baby themselves.

The baby is partly a catalyst for the breakdown of his idealistic set-up at Kingsley Hall, as gentle resident Jim (Gabriel Byrne) begins to obsess about Angie taking Ronnie away from him, talking ominously about demons eating babies. “The Talmud, Angie; save one soul save the world” Ronnie earnestly tells her. To which Angie, terrified of Jim’s threats, retorts: “well let that soul be our baby”.

In many ways Laing’s beliefs, while going too far, were a correction to the decades of poor treatment that had gone before, from electro-convulsive therapy to the infamous, institutionalising asylums, to the dolling out of tranquillisers like sweets to women. What is shocking is how the most vulnerable have to endure these pendulum swings, before we eventually meet some kind of middle-ground consensus.

The residents of Kingsley Hall are trying to deal with issues of great complexity and it’s clear that at their most troubled Laing’s approach is not enough.

Byrne is utterly chilling as Jim, who initially gives no indication that the severity of his untreated illness makes him dangerous. Sydney (played with heartbreaking diffidence and trust by Michael Gambon) is an elderly man trying to cope with the memories of his parents’ deaths when he was a child. Maria (Olivia Poulet) thinks she’s a high priestess, sitting in her room surrounded by candles. Raymond (Tom Richards) claims to be the Messiah.

John (Jerome Holder) is brought in by his parents, after horrific hospital ECT treatments. Laing tells his mother they’ll give him a cell, like a monk’s room a place of privacy and contemplation. And “If he wants to talk, we’ll listen”. But left alone with his troubled thoughts John’s mind won’t give him any peace.

Laing’s refreshingly open minded approach to other cultures also means his theories turn into a somewhat limiting hodgepodge in practice. When he explains to Maria that in another culture postnatal depression is explained as a spirit inhabiting the placenta, with exorcism by a shaman necessary to cure it, he’s rather flummoxed when Maria then requests one to do just that.

As a biopic of Laing’s life Mad To Be Normal works well. Laing himself is fascinating; his maverick status and personal complexities, combined with the fashions and music of the time, could in less talented hands turn the character into a selfish cliche. Instead Tennant’s masterful portrayal of a man driven to do good, but with astonishingly little self-awareness of the chaos he leaves in his wake, is a delight to watch – if sometimes like watching a runaway train on a high mountainside, hurtling towards a broken rail.

Mad To Be Normal is certainly entertaining and witty, occasionally shocking, and sometimes worrying. The main cast – Tennant, Gambon, Moss and Byrne – is an embarrassment of riches. It’s a riot of rich colour and lurid pattern, with flashbacks to people’s childhood memories a in black and white.

What we don’t get is overarching context, beyond the basics of patients mistreated by conventional medicine. Several incidents show the limitations of Laing’s ideas, and the realities for the people he’s trying to help, so this isn’t a slavish depiction. But it is a snapshot of the times.

It would be an easy joke to say Laing, like Raymond, thinks he’s the Messiah. But he’s too bluntly unconcerned to have a god complex himself. More that he’s a man with the self-confidence to drive through his ideas and also to brush off concerns, both genuine and not.

The question is what is right for a patient with severe mental illness, and when does providing help turn into benevolent paternalism. And sometimes the drugs do work. When depression is a chemical imbalance in the brain, correcting that can be a life saver.

Paul (a calmly endearing Adam Paul Harvey) is the only other doctor we see at Kingsley Hall. He’s a quiet fulcrum of clarity and thoughtfulness, combining the best of Laing’s approach with a patient-centred realism. I finished watching Mad To Be Normal thinking we need not more Ronnies, but more Pauls.

buy / rent mad to be normal on vod from amazon uk

buy / rent mad to be normal on vod or buy the dvd from amazon.com