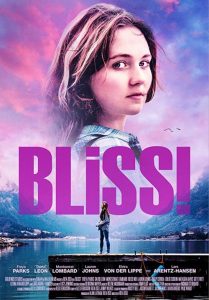 Bliss! is an assured and well-judged feature debut from director Rita Osei – an uplifting family film but an unsentimental one, and a movie that young girls can call their own.

Searching Norway for a blond man nicknamed The Viking was never going to be easy.

But it shows how deep teenage Tash’s need for a decent parent is that she’s prepared to travel alone from South Shields to Scandinavia to find someone to look after her, with only a 15-year-old photo of a Norwegian in a sailor hat to identify the man who might be her dad.

With five children, an ex-jailbird boyfriend called Charlie (David Leon), a pile of debt and an eviction notice, Tash’s mum Karen (Montserrat Lombard) can’t or won’t look after her brood properly – and the bombshell that Charlie isn’t Tash’s dad sends the teen across the North Sea in an attempt to locate The Viking.

(Charlie is a good-looking drunk with a nasty streak. It’s fair to say karma plays a blinder.)

It’s unusual to find movies about the links between the North East of England and Scandinavia, considering how much the two areas are entwined. Repeated influxes in the far distant past left their imprint in language (many Geordie words are similar to their Danish equivalents), and places (next time you’re hiking round Ullswater in the Lake District give thanks to Nordic chief Ulf, after whom it’s named).

The Viking was working on the North Sea ships, though it sounds as if Tash’s beautiful mum was a magnet too.

Tasha (a nicely judged performance from Freya Parks) doesn’t have much to go on. In the photo, his ship’s officer cap is pulled down rather jauntily over his face so he’s impossible to recognise except as generic hot Norwegian guy.

Still, it’s enough for Tash to get started; and with older brother Danny (Reece Noi) stumping up for her ferry ticket, and younger sister Debbie telling everyone Tash is staying at their nan’s, she heads off across the sea.

Bliss! is about families, and what makes them. Extended families often look after each other, but as a tradition or a choice. Here the ones supposed to be responsible are failing, while everyone else steps forward to look after someone younger and more vulnerable.

Danny loves his sisters and will do anything with them (though he’s happily abandoned pregnant girlfriend Dasa – she’s desperate to reunite with him so her dad won’t send her back to Cyprus, and there’s a tragically funny scene when she appears with a kebab to tempt him back).

Tash is protective of Debbie, and they plus their Nanna looks after baby Alison. Keeping an eye on all the other children is oldest sibling Jenny (Lauren W. Johns), who has moved out in frustration but still has to remind her mother when to be a mum, and can’t ever let go of her own feelings of responsibility.

The only one escaping parenting duties is Alison and she’s about 10 months old.

I spent a lot of time location-spotting while watching Bliss! Director Rita Osei and cinematographer Richard Stoddard has done an excellent job – it’s beautiful, but manages to avoid that rocky, bleakly glum beauty that films shot in the North of England often focus on (honestly, I’m rather over jutting crags silhouetted against a menacing sky). The sea is part of everyone’s lives (their home looks out onto the beach); Tash and Debbie are often roaming wild. Grassy, flower-strewn clifftops are pretty against the blue sky and an almost violet sea, the boats ploughing through the white-topped waves.

Tash’s first views of Norway are stunning, as the ferry she’s on navigates a harbour surrounded by sparkling white office buildings with green hills in the distance, a cobbled old town between them.

I liked that she’s streetwise, but not particularly skilled at the related darks arts of theft and running away quite fast. Her attempt at stealing food from a cafe when she’s just arrived in Norway is so inept she’s caught and sent to a children’s home. It’s there she meets the initially wary Marta (Elvira von der Lippe, a name which should immediately get the actress a role in the upcoming animated Addams Family), and together they run away to try to locate The Viking.

It doesn’t go well. In a bar, She’s mocked by Truls (Lars Arentz-Hansen) a middle-aged musician in whom she’s just confided her quest, who asks everyone over the microphone “anyone here been to Shields?” There’s much laughter, as nearly everyone raises their hands, but it’s a cruel way to treat a teenager looking for her dad. To his credit he realises this, and when he finds Tash and Marta en route to a music festival further north he takes her under his wing. Ultimately she’s looking for a father figure as much as an actual father. In fact a parent of any kind would be an improvement on her current situation.

Bliss! is a story for and about teenagers, particularly young girls – about finding your agency and following your path, before growing older makes you too wary, and even if it doesn’t necessarily pan out the way you think it will. There are some almost magical elements which give Bliss! a sparkling, otherworldly quality and highlight the different facets of teenagers’ personalities, and the worlds they live in.

The movie does lack tension during fights and supposedly frightening situations, and some performers aren’t always up to scratch. Though any negatives are hugely outweighed by the positives.

Tasha is a terrific heroine: half-formed (and I mean that in a good way), passionate, a little wild, childish but with an independent streak. You can picture her, her long brown waves and blonde streak blowing behind her, striding around South Shields like a 21st century Catherine Earnshaw. The understated Norwegians, Marta and Trulls, are a good counterweight to the noise and arguments in North East England.

Mum Karen’s journey takes longer. She’s an ineffective parent (though to be fair, she’s always trying to work). Even when Tash returns from Norway, she’s still doing shallow performance parenting on the jetty: fussing over Tash’s unwashed hair and complaining her daughter doesn’t look sorry. Lombard’s is an impressive performance. Occasionally the Geordie accent wobbles but mostly she’s entirely believable. You wonder if Karen is mixing up her children’s lack of respect for her as a parent with not loving her, and keeps having babies to ensure the continuation of that unconditional adoration small children provide.

It’s only later that Karen, faced with a situation she actually has lots of experience in, manages to take control as well as providing help to a young woman who needs it.

Bliss! is director Rita Osei’s first feature and from that first, sweeping scene, over clifftop ruins, you know you’re in good hands. The pace is almost misleadingly gentle, considering its themes and what is left unsaid. And she’s had the guts to finish on a note which is hopeful but not neatly tied up.

Buy or rent Bliss! on digital download from amazon uk