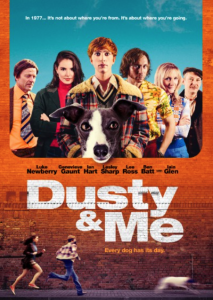 Dusty & Me is beautifully staged (it’s set in the 1970s, and looks of its time without being drenched in memorabilia), though one design element did grate. It was the Del Monte tinned fruit cocktail the family had for their tea one night, where I spotted a pink cherry in each bowl.

No way did one of those cans have four cherries in it – those things were the fruit equivalent of gold nuggets, as everyone over 40 knows.

Derek “Dusty” Springfield, back home with his mostly loving working class family in Yorkshire, is a fish out of water – being blessed with a tremendous brain, he’s been at a top boarding school on a full scholarship. Now, after being collected a day late by his wide boy brother Little Eddie (Ben Batt), he’s at home waiting for his Oxbridge entrance results.

Dusty (Luke Newberry) is super-bright and kind but a bit of a square, and rocks his boldly striped school blazer and tie quite nicely. His older brother favours a padded suede coat and huge sideburns; his other sibling Georgie (Tom Prior) is a Leeds United footballer and super-cool. No prizes for guessing where in the pecking order of acceptability Dusty comes, with their old school dad Big Eddie (Ian Hart).

It’s while he’s at home that Dusty acquires both a greyhound (who they name Slapper) and a girlfriend (who is already named Chrissie). Both help Dusty finally realise that he can actually feel at home in both worlds: the rarified one of public schools and Oxford University, and the Yorkshire streets with the chippy and a mum (Lesley Sharp) who’s to be found washing the glass ornaments on the dining room table.

Slapper is a runaway from the kennels of Mickey The Bubble (Iain Glen) – a bit dodgy but has a heart of gold, and a terrible line in wigs. (Mickey The Bubble, not Slapper – though disguises for many characters do make an appearance. An analogy with Dusty feeling he has to pretend to be something he isn’t, wherever he is.)

Dusty can lavish affection on Slapper, and teach him without him feeling patronised. The problem with Slapper is that he’s a greyhound who can’t run. Or can he?

Nothing unexpected happens in Dusty & Me at all. I could have named this site NoSpoilersEver.com and you’d still know exactly where this movie was going. Does Slapper win a race? Is the family (plus Chrissie and Mickey The Bubble!) happy by the end?

Dogs bring people together – soon his mum is sewing curtains for Slapper’s kennel. But they also attract attention. And when they find out how fast he can go, he becomes a target for two ne’r-do-wells who want to steal him (we know they’re ne’r-do-wells as they’re from over the Pennines in Lancashire).

Newberry does teenage alienation and confusion really well here, and is perfectly cast as the shy and slightly troubled Dusty. His character’s issues are (mostly) in his own head – this is a coming of age tale as Dusty reaches a crossroads and has to learn how to navigate his journey forward without alienating those he’s left behind. Apart from his miserable dad and a few minor characters, everyone is proud of him.

Genevieve Gaunt is good as the sweet Chrissie though there’s not much to get her dramatic chops into. Ben Batt is a funny and warm (if rather stereotypical) bear as Dusty’s slightly dodgy big brother. Lesley Sharp is terrific in a smallish role. Her low-key presence makes her the perfect warm 70s mum, gradually biting back at her lazy husband while protecting her family like a lioness. (Plus I really want her mid-blue jeans and embroidered cheesecloth top.)

This is a gentle comedy that doesn’t delve too deep, though there are some good jokes. (I liked the young couple coming out of the social club as Dusty and Little Eddie enter. “I can’t believe you went with my twin sister!” shrieks the young woman. “But she looks just like you!” he retorts. “No she doesn’t!” he gets in reply. Yes guys, you can’t use that old excuse with non-identical twins).

And while it’s a slight story that ends in an entirely expected fashion, it’s a warmly enjoyable 90 minutes getting there. We meander from orange sofa to wallpapered bedroom to remarkably smoke-free social club. There’s always a little team of local kids running past on the pavement outside, and the streets are very clean (this is 1977, before the Winter Of Discontent put Maggie Thatcher into power).

Hats off also to Lance Milligan, the costume designer (I’ve just discovered he also did Mad To Be Normal, another deliciously-dressed movie slice of 60s and 70s life). Yes this is a film set firmly in the 1970s, but it also understands that styles don’t instantly change as the calendar does.

The older characters are often in 1960s outfits, as they would be less influenced by fashion and would keep clothes for longer. The general trends are there but not everyone looks like they should be on stage with Abba, and the younger characters illustrate various levels of fashion-forwardness. Brother Georgie has a cool car, a long leather coat and polo necks; Dusty prefers flares, jumpers and a check jacket (and has to put a brave face on it when his mum gives him a green and brown paisley shirt for his birthday). Mickey The Bubble’s mate is always in the same zip cardigan.

I did recognise mum Lil’s orange and white cool box in the kitchen, which was exactly the same one we had in the 1980s (see what I mean about holding on to stuff).

There’s something slightly depressing about Dusty and his escape, though, watching in 2018. In the 1970s although far fewer young people went to university or even did A’levels, once you were offered a place it genuinely was a way up. Grants were available and students could still claim benefits during university holidays (there was a middle class kick-off when it was limited to *only* the long summer vacation in the mid-80s). For Dusty this really is a way for him to move up in the world, career-wise, and one his family can support.

Dusty & Me starts nicely and gets even nicer. It’s not going to raise any hackles, apart from on a cat. As for that title (how many of you thought Dusty would be the dog?) its working title was apparently Slapper & Me. I’m guessing the “Me” of the new title is actually Derek. Two names for two sides of the same person.

Dusty & Me will be released in selected UK cinemas from 28 September and VOD from 1 October 2018.

Watch the Dusty & Me trailer: