You are here: Home / Film Reviews / The Seventh Seal 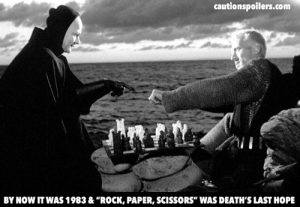 I’d never watched The Seventh Seal before, though somewhere along the line I’ve almost certainly pretended I have.

No film lover could be unaware of Ingmar Bergman’s masterpiece, though I was worried that memories of its parodies would prove insurmountable when I was finally faced with Death’s presence – it’s hard to take even mortality seriously when you last saw the Grim Reaper playing Twister and Clue with Bill and Ted on their bogus journey.

Luckily this cinematic tour de force has the physical beauty and philosophical heft to rise above such trivial pursuits (see what I did there).

Even the dance of death at the end, which could so easily resemble a line of drugged-up dads contorting themselves at Glastonbury, still feels entirely fitting.

The Seventh Seal is one of those films where I came out of the cinema feeling quite smug that I got it, only to find my thoughts completely unravelling as I tried to weave them into a coherent structure in my mind.

I was going to a film club discussion immediately afterwards. Usually I’m careful to have my notes down beforehand so I don’t inadvertently borrow someone else’s brilliantly original idea, though this time I was grateful for the input; particularly the three men who’d seen it over 50 years ago, memories of their first watch still vivid.

An ageing and disillusioned knight, Antonius Block (Max von Sydow), returns from the Crusades with his squire Jöns (Gunnar Björnstrand), to a land decimated by plague.

Meeting Death (Bengt Ekerot) on a windswept beach, aware his time is nearly up, Block still tries to extend his life with a game of chess. Anything for a bit more time: “wait a moment” says the knight. “You all say that” says Death, not remotely emotionally involved in any of this, though happy to use any tricks to win the game.

As knight and squire travel inland, they find a country convinced it’s the end of the world – portents of the end of days are everywhere. A despairing population will do anything, including using fire to cleanse themselves. Still at least they’re cleansed!

Jöns is cynical and sceptical, none too impressed with organised religion when its response to a pandemic is to burn witches, or hold huge processions where some poor soul staggers under a cross and everyone sings and self-flagellates. Unsurprisingly, just as God abandons them they pester Him with their desperation like just-been-dumped exes.

Block too is desperate for answers before it’s too late, so absorbed in his own troubles that when he comes across a condemned witch he questions her about her visits from the Devil merely to quench his own fears.

He and Jöns gather a sort of entourage around them as they head to his castle: a young woman who never speaks, saved by Jöns from an attack; and a group of travelling players, Mia, Jof and Jonas, who move from village to village in their little caravan. Jof (Nils Poppe) and Mia (Bibi Andersson) are married, with a toddler. Jonas meanwhile falls for Lisa, a blacksmith’s wife, as typical a wench as any representation I’ve seen with her low cut top, lace-up bodice and long blonde hair. But Death is never far behind.

You could simply watch this as a mystical medieval story about the storytellers’ favourite triptych of love, religion and death.

Though it’s a film both of its time, and for all times. It’s a 1950s movie too, born of a time when death could rain down on millions in the form on nuclear annihilation. Every age and community has a fear of death, often of a particular kind. And plagues, wars, and for women, the risks of childbirth have all highlighted the lack of power of most of their victims.

Accepting mortality is the only way to cope with death’s inevitability and snatch back some kind of control. Which seems a bit defeatist to me, as I search the web looking for ways to turn my fridge-freezer into a cryogenic storage facility.

But lest that all sounds too depressing, The Seventh Seal is also about love and sacrifice; despite Jöns’ comment that “love is the blackest of all plagues”, Jof and Mia are clearly devoted to one another and their child, while the knight’s wife has waited for his return when others have fled.

The film is much funnier than I was expecting (if I’m honest, humour wasn’t really on my “I’m expecting” list at all). Jöns has dark wit down to a fine art, and is so grimly amusing I’ll forgive him his complaints about the supposed contrariness of women. Lisa flirts silently with Jonas behind the caravan like a Carry On film sexpot, to a soundtrack of Mia and Jof singing “the virgin is pale but the pussy shows delight” to the villagers.

The women certainly chime with its medieval setting, and it looks as if Bergman is highlighting the medieval (in both senses) idea that we are either virgin, mother or whore: Jöns’ silent woman (“I’m married but I have hope my wife will be dead” he says to her when requesting she be his housekeeper); cheerfully realistic Mia, the mother of little Mikael, gathering wild strawberries and offering warm milk to drink; and married Lisa, flirting outrageously with her actor before running away with him.

Bergman’s love of everything and everyone related to theatre is clear, and the film looks theatrical and stylised. Characters appear in forest clearings as if from the wings of a stage: a man in his death throws from the plague, the young woman being taken to be burned.

The music at times seems to be channelling 1950s melodrama. But this is a staggeringly beautiful film, deep and spare while surprisingly uplifting, even for a nihilistic sceptic like me.

The great truism of life is that death is ever-present and cannot be out-run. Yet here Bergman presents it with such beauty, wit, and stoicism that The Seventh Seal is almost impossible to shift from one’s mind (Bill and Ted who?).