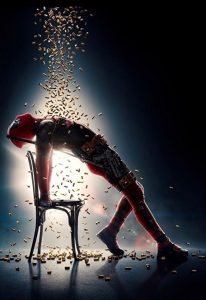 I only saw the first half of Deadpool. So I’m delighted to discover that, after years of seeing Wade as Schrödinger’s Superhero – both dead and alive at the same time – he did actually survive to make this sequel.

I’ve watched the whole of this trailer though, and you can too, below (green band version – or watch the red band trailer on my youtube channel).

Wade’s been busy – freeing the world from the tyranny of gluten, or so he claims.

This time around Cable (Josh Brolin) goes back in time to find a young boy, but Deadpool wants to stop him.

Wade / Deadpool gathers together a team of brilliant mutant superheroes (“we’re gonna form a super-duper group, that’s what we’re gonna do” he announces), including the arse-kicking Domino (the fabulous Zazie Beetz, who I last saw in Geostorm where she made interacting with green type on a computer screen look exciting and, yes, hot.)

They’re called X-Force, possibly because it’s easy to make an X with your arms.

Domino doesn’t seem that impressed with Deadpool, and is starting to regret not finishing college. (Don’t worry Domino, I did finish college and look where it hasn’t got me.)

The movie stars Ryan Reynolds as Wade / Deadpool; Morena Baccarin as Vanessa; Josh Brolin as Cable; Julian Dennison (last seen in  Hunt For The Wilderpeople) as the boy; and Zazie Beetz as Domino.

Deadpool 2 is directed by John Wick / Atomic Blonde helmer David Leitch and is released on 16 May 2018 in the UK and 18 May in the US.