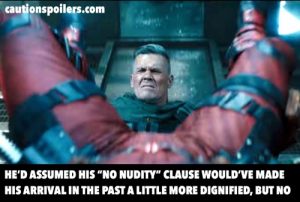 It’s half way through Deadpool 2 and as the body count rises the Fourth Wall is reduced to mere rubble, which means in future all movies will simply be our favourite stars talking directly to us through the screen, or maybe next to us on our sofas.

The opening credits to Deadpool 2 are as daft as you’d expect, with a reminder that director David Leitch is “One of the guys who killed the dog in John Wick“.  Which is all the warning you need that even in this ridiculous and hilarious comedy, death for any character is always a possibility, perhaps more than once.

Let’s face it, a man who can kill KEANU’S DOG in the opening minutes of the poor man’s comeback (I’m deliberately forgetting Knock Knock) is capable of anything.

Deadpool is a superhero who touches the highs of success and depths of failure, often in the same scene. I’ll admit to weeping with laughter as his X-FORCE team parachute into town on a rescue mission. In fact one of the best reasons for learning karate, lock-picking and fast-talking is so you never have to rely on this lot to save you.

We watch them gliding gently Earth-wards, towards the kinds of suburban horror only a garden wood chipper can offer: Bedlam (Terry Crews), Pete (Rob Delaney), Shatterstar (Lewis Tan), Zeitgeist (Bill Skarsgard), and Vanisher (an invisible cameo). Oh and Domino (Zazie Beetz), whose superpower is, luckily for her, being lucky.

But to paraphrase Talking Heads (not in the film, though enjoy Aha’s Take On Me) how did we get here? Wade and Vanessa decide to start their own family after she presents him with her IUD in a gift box. I had no idea that’s what an IUD looks like, or how small it is, and was thinking “there’s no way that can have stopped a baby from happening” but then I’ve always erred on the side of caution and my idea of contraception is the full-body condoms from Naked Gun.

With Vanessa (Morena Baccarin) dead, Wade loses the will to live, blowing himself up in a fireball. Luckily his remains are rescued by the shiny Colossus, who seems very nice but will need a lot of polishing.

(Colossus’s greatest strength could indeed turn out to be his Achilles heel, with one super-hero-villain, I  forget his name but he’s the huge kind who can’t be stopped, declaring he’ll “melt you down and make a cock ring”.)

The revived Deadpool is an X-Man in training. His first task, with Colossus, Negasonic Teenage Warhead (Brianna Hildebrand) and her girlfriend Yukio (Shioli Kutsuna), is to face down Firefist – real name Russell. A lonely and angry teenage boy, with fiery fists, he’s been incarcerated at an orphanage for mutants, headed by a torturer-headteacher (Eddie Marsan).

It’s hard to get near enough to the furious Firefist (Julian Dennison) to help him. After some flame-throwing both Russell and Wade are sent to the Icebox, a prison for mutants hewn into snow-covered rock.

But tracking Russell is Cable, played, very movingly considering this is Deadpool, by Josh Brolin – a man so chiselled, I’m now convinced he actually is 25% metal and 75% rock.

Cable is from the future, though he doesn’t announce his arrival by, I don’t know, sending a telegram or something similar. Instead he crashes into prison, to kill poor Russell before the boy makes his own first kill – after which he will have a taste for murder, his spiralling criminality one day resulting in him murdering Cable’s family.

The two of them manage to hold off Cable (why didn’t he just tie them up, perhaps with, I don’t know, something like a rope but maybe made of metal?) and Wade escapes.

It’s when he decides to assemble a superhero rescue team for Russell that Wade starts interviewing for X-FORCE. Domino (Zazie Beetz) is likely to be most use; and though lucky people can be really annoying, she gets extra points for not using her skills to win the lottery every week.

Cable meanwhile is implacable, and will not stop; not even to relax, and maybe, I don’t know, watch some TV on a non-terrestrial channel. And it’s down to Domino and Deadpool to save Firefist and persuade him not to kill anyone.

What I wasn’t expecting was the rather sensitively portrayed growing understanding, around some very good and some really awful jokes, that apart from the orphanage headmaster no one is evil. The ambivalence and moral dilemmas were a welcome surprise.

The jokes wear a bit thin, though they have the courage to maintain the madness from the start (a music box featuring Logan impaled on a tree) to the end (those mid-credits scenes).

There’s also a remarkably touching seam of love and good-heartedness. So much so that I’ve decided Leitch is just a big softy and poor Daisy in John Wick an aberration. Or maybe we can blame that one on Chad Stahelski.

The cultural references don’t leave out 80s kids like me. I particularly enjoyed Wade’s heartfelt reaction to Vanessa’s death: “George Michael was right, I’m never going to dance again”, before noting that while Michael may be gone, we still have Bowie.

I also finally learnt how to pronounce Matthew McConaughey, though I just had to google how to spell it.

Dennison is sweetly glowering as the tormented yet insightful Russell. Determined to make the headteacher pay for his abuse, he’s also well aware that there are no plus-size superheroes (“the industry discriminates”).

There’s so much meta humour I wasn’t sure if Ryan Reynolds was playing himself or Deadpool Actor Ryan Reynolds, though he’s an always engaging presence, and his scenes with Baccarin are delightful.

I’m starting a new paragraph for the hilarious Beetz, last seen making green type on a black screen interesting in Geostorm. Her Domino is delightful, funny, forthright and forceful; that X-FORCE interview is mainly she and Wade arguing over whether luck is a superpower (it’s easily the best superpower, as everyone realises once they understand that Karma is a con).

The action scenes are terrific, with the fighting – hand to hand combat combined with occasional pauses to turn and shoot someone in the head – enjoyably Wick-like.

And as for X-FORCE, by the end their numbers are low but they’ve truly bonded. You could almost call them, I don’t know, a secret faction? Oh wait that’s a Cabal. Let’s just call them a family and leave it at that.