You are here: Home / Weird Movie Shit / Seven Films I’ve Only Seen Half Of 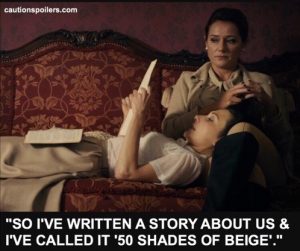 Social media LOVES its 7 hashtags. Currently most popular seems to be #7FavHorrorFilms, though #7FavFastAndFuriousFilms is also appearing (okay I may have made that last one up).

But sadly I DO have Seven Films I Only Saw Half Of (sorry I mean #7FavFilmsIOnlySawHalfOf). Some of these I do still mean to go back to. When I get time.

NOT a Merchant Ivory bodices and britches flick despite the name. Slow and very sensual, low-key but hugely sexy, it’s about two women with a weird sexual power dynamic going on between them with lots of gentle stroking of stocking tops in a slightly sepia world. Unfortunately I didn’t get to watch all of it though I did find out that lepidoptery is the study of butterflies and not, as it should be, the study of leopards. Whatever, Duke of Burgundy is definitely on my Half Films To Watch list.

How HOT is this film? The sex scenes are HILARIOUS and they certainly gave me some ideas for celebrating International Women’s Day. I started watching it at midnight and then got tired, but it was Christmas so although I meant to watch the rest the next day I never did as I had to pop to the shops for festive things I’d forgotten like Christmas crackers, new stockings and a good stuffing.

Long-haired Keanu in a film that feels so interminable he could’ve started off with short hair and it would have been down to his feet by the end. Anyway I got to 23 Ronin and frankly that was enough (that joke never gets old and neither does he).

The gorgeous one from The Hangover looking irritatingly sexy in chef’s whites and his leather jacket, plus the gorgeous one from Live By Night looking as ugly as it’s possible for her to look which is not very. So Bradley Cooper and Sienna Miller, then. I’m not massively keen on either of them, he’s a great actor but has a touch of the De Caprio smugs about him, though if he wants to do a Jeremy Renner (a man I also couldn’t stand and now seem to weirdly adore EVEN THOUGH HE LOOKS LIKE A WALNUT), he just needs to appear with Amy Adams in EVERYTHING and I’ll start thinking he’s amazing. And Sienna, well put it this way, if I was married to an A-lister and they announced they were doing a film with SM I’d be appearing at the airport with 50 suitcases of sexy outfits saying “Hi honey I thought I’d come with you!”

She was good in this though, especially when she was made to apologise to a piece of turbot. But BCoop was just too annoying for me to head back into the kitchen for another grilling.

This is a really great film so no I don’t know why I stopped watching it either. A scientist (Sam Rockwell), all alone with only himself for company (that’s a clue, folks) is mining helium-3 on the moon (I’m not sure why, maybe so kids’ entertainers never run out of balloons) and as he comes to the end of his three-year shift he starts to break down. With Kevin Spacey as robot Drew Barrymore, I mean GERTY.

I think it was late and I fell asleep and when I woke up it was morning and the moon was nowhere to be seen. Since then, my moon-related convos have been with my 5 year old and consisted of a very serious discussion re whether the moon is indeed made of cheese, and it turns out I won’t take no for an answer.

I love films about sharks from SyFy and I love that I could list plot details from almost any SyFy shark film and, with the addition of a tornado, and possibly a giant spider, it could probably be made to fit any other SyFy shark film. So  I’m not entirely sure it’s necessary to see the ending.

GERRYYYYYY!!! I switched this on part way through and Mike Banning was wandering round the White House with lots of guns looking like a man who can singlehandedly save the world, then allow the female half of it to shag him straight afterwards in appropriate gratitude. And I bet he’d be great.

I didn’t get to see the end but I’m guessing he lives, as he went on to make two sequels and is planning a Fallen 4. Because apart from the Alien franchise that always works! I would though, love to see someone remake Olympus Has Fallen with the same title but involving ancient Greek gods and leather loincloths and togas and grapes, balanced with some light Scottishness (which is what I thought it was about before I saw it). So Basically, 300 again.

Please tell me yours! And whether you want to go back and finish the job, so to speak.