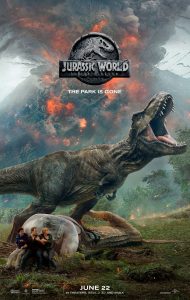 “And in my hour of darkness,
She is standing right in front of me,
Speaking words of wisdom,
Let it beeeeeeeeee….”

Come on, who doesn’t love a sing-song. This new artwork was released in anticipation of the new and final Jurassic World: Fallen Kingdom trailer, which you can see below.

I love the Jurassic World franchise. Pissed off females with scaly skin and awful teeth are allowed to take centre stage. And they’re over 60! (million years old)

The movie is released on 6 June 2018 in the UK and 22 June in the US. Check out the trailer below, or the previous first and second trailers.