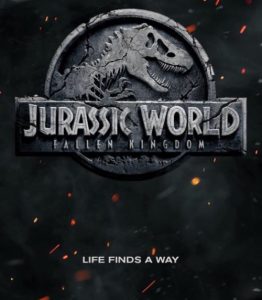 *** Check out the Super Bowl trailer for Jurassic World: Fallen Kingdom (it’s better than this one, honestly) ***

No not the T Rex, all the dinosaurs are she’s. Dr Ian Malcolm! Apparently his part is small, but he’s definitely in the new trailer: “These creatures were here before us. And if we’re not careful, [pause for dramatic effect] they’re gonna be here after.”

And thank god he brings it back to the actual dinosaurs, as yet again watching a Jurassic trailer simply resurfaces terrible memories of my children’s playdates, especially the scene where Owen Grady is running for his life away from billowing clouds of black smoke and arse-loosening, teeth-baring creatures that destroy everything in their path.

And that’s not to mention spying one of *his* raptors, raised from babyhood, who when he tries to get through to her instead roars at him like she’s literally about to bite the hand that fed her.

This time around, with shades of The Lost World crossed with TV’s Pet Rescue, the dinosaurs are roaming free on Isla Nublar after the catastrophic events of the previous film.

But their idyllic home (well, idyllic of you’re at the top of the dinosaur food chain; not so much if you’re one of the little squeaky ones at the bottom) is threatened by a volcanic eruption. And Claire Dearing, who has set up a group to advocate for and protect the creatures, enlists Owen Grady to help.

The question is how to make a dinosaur movie interesting with chase scenes that we haven’t already seen before. Presumably there are no new monsters if the creatures have all been roaming free eating leaves and each other for a few years. It looks as if their answer is “add lava”.

But the underwater scene looks interesting and Dearing/Grady always have an enjoyably spiky relationship. Plus, well, DINOSAURS! AND JEFF GOLDBLUM!