You are here: Home / Trailers / “WHAT IS THAT THING!” Jurassic World Fallen Kingdom Trailer 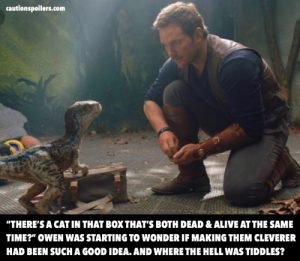 And this new trailer is MUCH scarier than the last one, with much scarier dinosaurs. Bigger, louder, more feet – huge, clawed and scaly, terrifying as they thump into your bedroom. But that’s enough about me.

“What is that thing” is something I’ve said a lot over the years,  both pre- and post-children, and yes those things are connected.

Here of course it’s another dinosaur that they probably shouldn’t have created, by people who really shouldn’t be left in charge of a hamster.

We know from the first Jurassic World: Fallen Kingdom trailer that this time round the animals are roaming free on the island which is then threatened by a volcanic eruption – so Clare and Owen have to step in to save the creatures from another extinction. And there was a rather boring chase scene.

But this trailer adds more terror, and menace, and the obligatory shadowy group creating yet more scary creatures for nefarious ends.

Check it out below. Jurassic Park: Fallen Kingdom is released in the UK on 6 June and the US on 22 June 2018. It stars Bryce Dallas Howard, Chris Pratt and B D Wong, and is directed by J A Bayona.