Gerard Butler is Joe Glass, a submarine captain who has to find the Russian president who’s been kidnapped during a coup. I’m assuming it’s not their current president, as Vladimir Putin being taken by anyone is highly unlikely, even if he was already simultaneously bare-chest fighting a man-eating bear and interfering in US elections when they turned up for him.

Though my first question about the Hunter Killer trailer was of course, would Gerard Butler be Scottish? Either on purpose or accidentally?

And here it is! He’s not Scottish, not in this clip anyway, though I can’t vouch for the rest of the film. 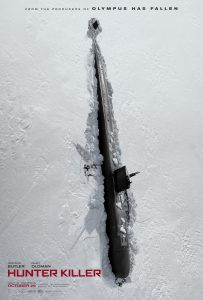 The film looks both deadly serious and enjoyably batshit, though I can’t work out if it will improve East-West relations or completely destroy them.

But with real life turning into a Geostorm, perhaps a few years earlier than we all anticipated, most of us probably want to take refuge in the water, especially if Gerard Butler is in there too.

Admit it, it’s going to be a belter. No one does twinkly-eyed, intent screen-staring in a boilersuit like Gerry.

The film is directed by Donovan Marsh and is released in the UK on 2 November and the US on 26 October 2018. (You can watch the second Hunter Killer trailer here)