You are here: Home / Submarines / Surfacing Now – Seven Submarine Movies To Dive Into 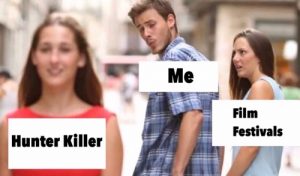 With Hunter Killer star Gerard Butler wanting to bring back submarine movies as a genre (there’s already a Das Boot sequel TV series in the works), I thought it was about time it had its own section. (You can do what you like on your own movie website, as my upcoming article on Victorian nighties in cinema will prove.)

Check out my submarine reviews below – the good (Americans, non-Nazi WW2 Germans!), the bad (Cold War Ruskies!) and the ugly (the boob jokes in Down Periscope!). 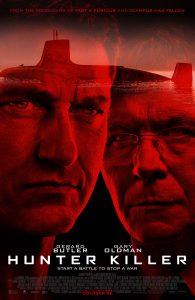 Joe Glass, an untested captain, is given his own submarine, the Arkansas to command – and when another US sub goes missing he and his crew are sent from chilly Scotland to even chillier Russia to investigate. They find it at the bottom of the sea, but they also find a Russian sub lying nearby.

Soon the Americans receive intelligence of a coup in Russia, and it’s up to Glass (Gerard Butler), his crew and a few Navy SEALs, to rescue the Russian president (our enemy’s enemy is our friend, for two hours anyway).

With slightly useless presidents in charge in both America and Russia, thank goodness Glass pretty much does what he likes – which makes this movie exciting and a whole lot of fun (until the last quarter when it falls apart).

I was so involved I even used the little buttons to tip my cinema seat back as Glass took the Arkansas underwater.
Review of Hunter Killer – 3.5/5 stars
Back to top 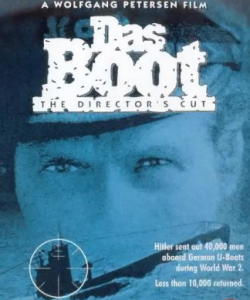 Wolfgang Petersen’s epic anti-war, war film was re-released in 1997 with this director’s cut. At 3.5 hours it’s a long haul but never boring – as we watch the captain, officers and crew face terror, ennui, excitement and occasional joy in the North Atlantic in 1941.

The submarine’s nameless captain (Jürgen Prochnow) is cynical and war-weary, with officers who mostly agree with him but a young crew who have yet to learn what war is really like. Theirs is a baptism of fire, as the Allies attack them from air and sea.

The weather is mostly horrendous, and cinematographer Jost Vacano absolutely brings home the neutral power and beauty of the sea and the vast loneliness.  Down below it’s narrow and claustrophobic; the dive alarm sees the men careering along what is basically a long metal tube.
Review of Das Boot – 5/5 stars
Back to top 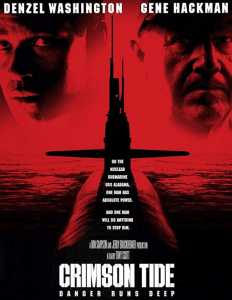 Set after the collapse of the Soviet Union, Crimson Tide shows the fragmentation of the old ways leading to conflict and unpredictability both above and below the waterline. With Russian rebels threatening a first nuclear strike, Lt Commander Hunter and his captain Killer (just kidding – it’s Ramsey) argue over whether a second emergency message, cut off half way through, rescinds their previous orders to launch their own nuclear missiles.

Starring Gene Hackman as Ramsey and Denzel Washington as Hunter, this is a blockbuster thriller from Tony Scott where the talking is as nerve-jangling and immersive as the action.

Heart-stopping as it is watching torpedoes head towards the USS Alabama as they wait to release their countermeasures, the arguments and stand-offs onboard are just as shredding.
Review of Crimson Tide – 4/5 stars
Back to top 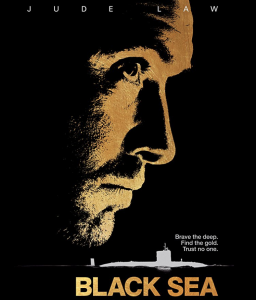 Jude Law is Robinson, a submarine pilot thrown out of work by the salvage company he’s worked with for years, who hears about Russian gold on the seabed in Crimea and puts together a team of Scottish and Russian men to find it.

The sub they hire is a dank, rusty mess – this is a genuinely claustrophobic film with man-made and accidental disasters.
Review of Black Sea – 4/5 stars
Back to top 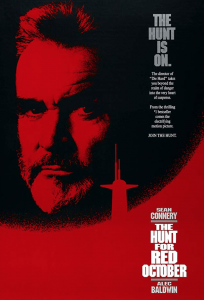 The Hunt For Red October

This time it’s a tested Captain but an untested CIA analyst – both mavericks – circling each other as they try to work out each other’s motives and aims. Failure could mean World War 3.

Markus Ramius, the hugely experienced captain of new Russian submarine the Red October, is on a mission to defect to the West.

The Russians are sending all their might after him, and the Americans aren’t sure if he’s a lone madman about to blow up the western seaboard of the United States.

This is an intense and exciting thriller that still works after nearly 30 years. Enjoy the long scenes that allow the story to properly unfold, Sean Connery and Sam Neill’s glorious partnership, and Connery’s Lithuanian-Scottish accent.
Review of Hunt For Red October – 4/5 stars
Back to top

This is a survival tale where we already know they don’t survive; it’s thoughtful, grim, and, considering we know the outcome, impressively tense.

Kursk is based on the sinking of the Russian nuclear submarine the Kursk, which sank (in relatively shallow waters) in the Barants Sea during Russian military exercises in 2000. 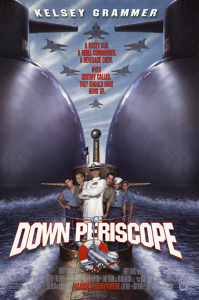 An untested captain (yes him again!) is given his own submarine to command but it’s a total rust bucket, and his crew are almost guaranteed to get them all sunk.

Newly promoted Captain Tom Dodge, who has a tattoo on his penis saying All Aboard, has to win a series of war game manoeuvres where the odds are stacked against him from the beginning.

Starring Kelsey Grammer, Lauren Holy, Bruce Dern and Rip Torn, this is reasonably diverting with a few good moments – though overall it’s old fashioned and simply not funny enough.
Review of Down Periscope – 2/5 stars
Back to top