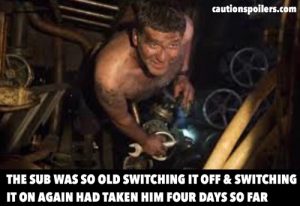 This is smaller in scale than any of those epic Cold War and post-1990s submarine blockbusters, and what goes on underwater is destined to stay underwater as hardly anyone knows that the crew – hunting for a hoard of WW2 gold, 80 million Reichmarks’ worth – is down there.

And despite the suspicions, arguments, fights, and betrayals nearly everyone on the sub is a pawn in a rich men’s game. Easily manipulated, they’re soon at war with each other while the elite pull the strings – and one disaster after another, both man-made and accidental, threatens to send them to the bottom (still arguing, probably).

Of all the submarine movies I’ve watched lately, I enjoyed this one the most. It’s a seat-of-your-pants thriller with a pared-down urgency and realness to it even though, when you stop and think about it, Kevin Macdonald’s film is a preposterous tale.

The operation itself, with recently jobless submarine pilot Robinson (Jude Law) leading a crew of skilled but unwanted misfits and lost souls, has been pulled together from an Aberdeen cafe – and involves a cramped, rusty boat that is genuinely claustrophobic, the work hot and sweaty and uncertain.

Robinson has just been fired and told to clear his desk after years at an Aberdeen salvage firm. Estranged from his ex-wife and young son, he’s desperate for both money and dignity; and jumps at the chance to make millions when his unemployed friend Kurston tells him about a U-boat of gold sent by Stalin to Hitler as a “loan” to prevent a German invasion during WW2. The gold never arrived, the Germans invaded, and in the decades since the submarine has lain at the bottom of the Black Sea. There’s no doubt that it exists, or where it is, but Russian-Georgian fighting has meant so far no one has been able to salvage it.

Their Crimean sub, when they arrive in Sevastopol, is nothing like the relatively airy Russian and American Navy stars of other films. This is a rusty, dank, stained machine, utterly functional, with hatches and tilted tunnels between rooms – an industrial complex in the water. (These scenes were filmed on an old Russian submarine moored in Kent, of all places.)

Checking its workings and fixing broken parts, the men light up; proper mechanics with not a job-stealing computer in sight. It’s rather moving, and one of the few times the crew works as one.

This time there’s no chance of WW3 breaking out if someone makes a wrong move, but the working class crew’s desperation before they even get on the boat still makes it high stakes and believable. (The crew’s on-board mocking of Daniels, the representative of their financial backer, is their only way to get back at the elite that has harmed them.)

I love the elegance of submarines underwater versus their above-water unwieldiness, and the friendly Reynolds (Michael Smiley) puts it perfectly when he likens them to penguins. The rest of the crew includes Baba the sonar expert (“the best ears in the Russian Navy”), and Fraser (a scarily unpredictable Ben Mendelsohn), who may be a psycho but is also an amazing diver: “half man and half fucking fish”. White-haired Peters (David Threlfall) is ill and old but delighted to be asked.

Robinson announces that every man will get an equal share of that final 60%, a communist decision from on high that doesn’t go down well, and inevitably leads to the realisation that any deaths increase the survivors’ shares. The volatile Fraser, who no one would want to be stuck hundreds of feet underwater with until they’re out walking on the seabed and need his help, goads the Russians and wonders why they get the same when in their country their share is worth so much more than in the West.

It’s not long before arguments, accidents, fights and fires leave the submarine stricken. This is a visually shocking film. Burnt bodies, drowning men, knives stuck in chests – deaths both accidental and deliberate.

Law is excellent as the driven yet blinkered and naive Robinson, so raging at the big “They” in society who have wronged him, that he misses the intentions of people closer to home (see how long it takes you to spot the Black Sea equivalent of Aliens‘ Burke on board).

Robinson’s (admittedly well-deserved) grudges push him off course and drive his own arrogance. “Who is they? Who is they?” shouts a desperate Morozov (Grigoriy Dobrygin) near the end, as they struggle to survive. Schofield is movingly desperate as poor young Tobin goes from delight at being given a chance, to looking death in the face. “We just want to live now. Can’t we just live?” he begs.

There’s an earthy wit which lessens the personal misery. “When we get up on top I’m going to eat your liver” says the rough-hewn Baba in Russian to Fraser, who nods and smiles. Earlier, having just got on board, Peters responds to Daniels’ belief that “this wreck’s gonna sink!” with a sardonic “fucking useless sub if it doesn’t”. Outside in the water Fraser describes the seabed as “like butter made of dog shit”.

Black Sea is a thoroughly engaging thriller with a human and humane edge. Despite the sub’s festering, damp claustrophobia the movie itself is a blast of fresh air, that makes the lives of ordinary working people its drivers; even if like many submarine movies its characters are still crushed by an ideology.