You are here: Home / Film Reviews / The Hunt For Red October 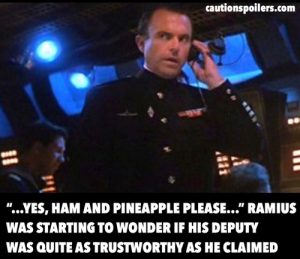 I miss the Cold War. We knew where we stood – permanently on the brink of nuclear annihilation, obviously. But those proxy wars and chess matches were, mostly, holding us back from the brink, playing out within agreed confines.

The dangers were huge but we at least knew who our enemy was. Now they seem to be everywhere and I might even turn out to be on the wrong side.

The Hunt For Red October came out in 1990. Based on Tom Clancy’s book, it’s set in 1984, just before Gorbachev came to power. But the movie’s release came during those years which saw the dismantling of the Berlin Wall and the domino-like falling of communist regimes all over Eastern Europe.

I don’t remember it seeming anachronistic, a film released just too late; and it doesn’t fail now, nearly 30 years on. It’s still an exciting watch, one of those movies where you breathe a sigh of relief realising your teenage admiration for it isn’t about to be shattered when watched with older eyes. It only feels old because we don’t get submarine thrillers on this scale any more.

This is a supremely confident film that has the courage of its convictions as the story slowly and steadily unfolds. It never feels too long, and the tension ratchets then releases several times to keep us onboard. There’s a chilly majesty to its scale despite its confined locations.

Scenes are long; after Captain Ramius’s rousing speech to his crew about Russia now having the upper hand they start singing a patriotic Russian song, and keep going right until the end.

Marko Ramius (Sean Connery) was old school even 30 years ago. He’s trained all the officers in the Russian fleet, but when he’s presented with the groundbreaking sub Red October, he knows it’s a game-changer.

Super-quiet and stealthy, the technical term is magneto hydrophobic propulsion though I have no idea if that’s a real thing. Red October is a perfect first strike weapon, that could destroy the eastern seaboard of America before anyone knew what was happening.

Ramius may not have been a fan of the chilly four decades-long status quo: “a war at sea, a war with no battles… only casualties” he says, but after 40 years under the sea for the Russian Navy it’s all he’s known. As they set off he reminds his crew that “once more we play our dangerous game”, though at least it’s been a reasonably balanced game.

Still, despite handpicking his officers for his plan, one man has to go – the Political Officer (a title which sounds almost Monty Python-esque) Ivan Putin; murdered by Ramius, who then steals the dead officer’s launch keys.

While the water is murky is the most dangerous time. CIA analyst Jack Ryan (Alec Baldwin) has studied Ramius and met him once, so when Red October is discovered with the whole of the Russian fleet after her, he’s the one urging the Washington hawks to be cautious, and it’s he who suggests Ramius may actually be trying to defect. He then has to prove it, working forwards and backwards, before misleading Russian subterfuge can lead everyone into a war.

The Russian ambassador (Joss Ackland – what are white middle-aged British character actors supposed to do now we have more diverse casting? Oh wait, there’ll probably be another Churchill flick along in a minute) prevaricates and procrastinates at the Americans.

First they say the missing submarine is in distress, the subs and ships hunting it merely facilitating a rescue. Then they claim Ramius is a lone madman determined to launch a strike against the US.

Meanwhile the USS Dallas, helmed by Captain Bart Mancuso (Scott Glenn), is also tracking the Red October; Mancuso’s sonar expert (Courtney B Vance) is superlatively skilled, working out that what he can hear is the silent Red October, meaning they can track it.

I liked that what exists between Ryan and Ramius is respect rather than false warmth. There are deep-seated differences. Ramius doesn’t really rate his chances. And his big worry is not the Russians, who he knows, but the Americans, who he doesn’t.

But he’s also an outsider in Russia, as he’s not even Russian (he’s not even Scottish either, but Lithuanian). Not everyone among his officers sounds like they’ll be happy in the US. There’s a beautifully illustrative moment on board the Red October after Ramius has killed their Political Officer. As the officers chat and smoke, one states that while he doesn’t mind if the man was actually murdered, it should – in the best communist tradition, presumably – have been a group decision.

l loved Sam Neill as Borodin, Ramius’s second in command. Baffled by some of Ramius’s decisions he always trusts him, and even allows himself a dream: “do you think they will let me live in Montana?” he asks Ramius (even his last line, while cheesy, sounds rather plausible uttered by Neill).

There are some anomalies, not least Connery’s Scottish accent which has now become an essential aspect of the film. I almost cheered when he finally said “we shall shail into hishtory”. And while an all-male submarine crew in the 80s was not at all anomalous, it’s depressing that there are maybe five lines uttered by women in the whole thing.

Are submarines, like boats, called “she”? Built for longterm utility and war, these grey hulks are rather lovely gliding through the water, which is all shades of blue – menacing on the surface but elegantly functional under it. There’s a suspenseful yet beautiful scene as the Red October tries to navigate a rocky and narrow undersea canyon, its Russian nemesis the Konovalov on its tail, torpedoes speeding towards Ramius’s sub (The cinematographer was Jan De Bont who went on to direct Speed in 1994.)

There’s an 80s garishness to the subs because of the way lighting is used. The screens are bright: green, red, and blue lighting distinguishes between the different submarines and illuminates every action.

Tautly directed by John McTiernan, the tension in Hunt For Red October builds gradually; I was on the edge of my seat despite knowing the ending.

Baldwin is compulsively watchable and entirely believable as Ryan becomes more jumpy, more nervy. His existing fear of flying mingles with the volatile situation he’s literally dangled into as he tries to utilise what he knows about Ramius and add in some educated guesswork – hoping his analysis is correct and the guesses lucky.

And Connery is superb as the physically imposing, intellectual and self-isolated loner, single mindedly pursuing his intricately plotted plan while fighting off two superpowers.