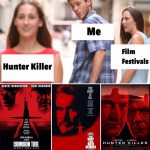 …and a new red poster! The film’s out in Oktober so not long to wait now until Gerry saves me, I mean us, from World War 3. *** Read my Hunter Killer review now *** Check out the new trailer below – you can also see the first Hunter Killer trailer (released back in July)… END_OF_DOCUMENT_TOKEN_TO_BE_REPLACED

*** Read my Hunter Killer review & check out my submarine movies section *** Gerard Butler is Joe Glass, a submarine captain who has to find the Russian president who’s been kidnapped during a coup. I’m assuming it’s not their current president, as Vladimir Putin being taken by anyone is highly unlikely, even if he was already simultaneously… END_OF_DOCUMENT_TOKEN_TO_BE_REPLACED

Swedish actor Michael Nyqvist has died aged 56, of lung cancer. He starred in The Girl With The Dragon Tattoo, Mission Impossible Ghost Protocol, and of course in John Wick. His character, gangland boss Viggo Tarasov, was John Wick’s old boss and a man who seemed to straddle old and new Russia – and one… END_OF_DOCUMENT_TOKEN_TO_BE_REPLACED