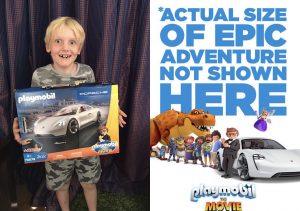 After Cassian (aged 7) wrote a review of Playmobil: The Movie, we were contacted by Playmobil to ask if he and his brother Ashton (aged 10) would like to review some of the merchandise tie-ins from the film.

It’s my favourite toy and I was really, really excited when I heard it was coming. It’s a really, really cool car, and it’s great for playing like the movie. I played with it a lot yesterday and most of today. Of course it’s five out of five stars.

To put the car together it said adults to do it but I did most of it as my mum is rubbish at stuff like that. I didn’t really need the instructions for most of it. She put the batteries in for me. 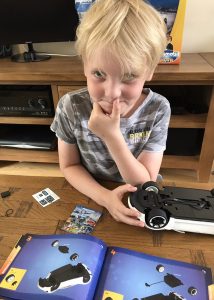 Putting the car together

The headlights go on which looks really cool. It’s meant to be an electric supercar and a bit comes out by the wheel where you plug in Rex’s electricity charger (this is just pretend and doesn’t actually work). The doors don’t open but the roof comes off like a sports car. When the car’s roof comes down it looks like there is a lot of space, that’s what I don’t like. There are compartments behind the seats to slide things in like like his iPad thing.

At first I couldn’t fit his feet in the car because of the seats. You have to press really hard to make them go in but when they do you hear a click and then you can put him in easily. There are spiky hubcaps to go on the wheels, you know if you’ve put the wheels on properly as the hubcaps don’t fit on if the wheels are the wrong way round.

My brother already had a Rex Dasher figure from when we saw the movie and we all got a Playmobil figure. So my car had two Rex Dashers in it which was good because today the dog chewed one of them. 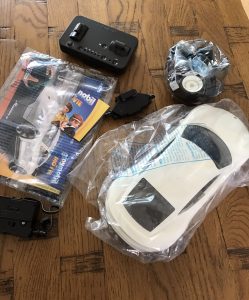 On the remote control there are two levers to go forward and back, and turn the wheels to each side. There are five levels of speed and a button for the headlights. And there’s a little dial for turning the wheels.

I’ve played with it by myself and with my brother Ashton and his Playmobil Colosseum.

Read my brother Ashton’s review of Emperor Maximus In The Colosseum, and my mum’s 3-star review of Playmobil: The Movie.

Mum’s note! We needed the instructions for the car but it’s not complicated. Putting it together took about 20 minutes. The app/Bluetooth option for Rex’s car took a couple of goes to work, though it’s pretty straightforward. Cassian preferred the remote control unit to the app though both worked fine. Rex and his car have been a big success – Cassian was very excited about it coming and could talk of nothing else til it arrived. He’s played with it for ages at a time since then. At RRP £69.99 it’s overpriced, though ultimately what will decide its “real” value is how much he continues to play with it.