You are here: Home / Other Reviews / Movie tie-in toy review: Emperor Maximus In The Colosseum from “Playmobil: The Movie” 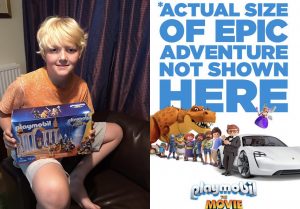 Firstly I want to say thank you to Playmobil for sending us these toys to review and let’s just turn this into a toy reviewing channel now!

Oh and here’s a link to my brother Cassian’s review of the movie (don’t worry I won’t spoil the review even though that’s the title of this website): Playmobil: The Movie

So Playmobil said we could review a toy from Playmobil: The Movie, and I asked to review Emperor Maximus in the Colosseum (RRP £34.99). It’s basically a row of columns in a curve, with statues and flames. It comes with four figures which are all quite big and really chunky.

The colosseum is VERY easy to put together (I’m 10, by the way). The pieces are really chunky and even someone little could do it.

The figures are really good. I like how they go so far to put the daggers in holders. My favourite figure is the guy in the black armoured suit, the Black Knight. There’s also an Emperor Maximus, a Viking (who is Charlie from the film) and another fighter in armour (Marla, Charlie’ older sister, who in the film has to rescue Charlie from Emperor Maximus). The statues were a really good idea too. 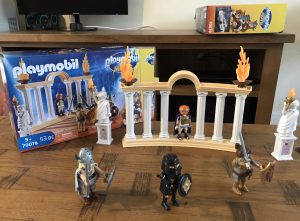 I want to talk about the detail of the figures because they were really good and there were a lot of them. My mum even told me that they were good value but I suppose I wouldn’t know that because I haven’t been managing a bank account for 20 years. But that’s beside the point now, because you can really make up some incredible games with just a couple figures and the background and now I’ve just realised I have said “because” a lot. (That totally wasn’t planned out in my head the whole time to make a joke.)

Now I have come to the point that I’m so nearly almost done (it doesn’t matter if the punctuation/grammar in that was very incorrect) and I have to talk about… THE  SHIELDS. Well, the shields were very nicely designed and on the Black Knight it actually looks like how a knight holds a shield.

Cassian and I played with the colosseum and Rex Dasher’s car, which he reviewed. He wanted to play a game about the movie but I didn’t, though we did play with all of them together. At the moment I’ve got the colosseum and all the figures displayed in my room, and they look really good together. 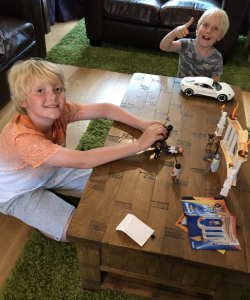 Playing with my brother and not fighting!

But anyway this is a very good toy overall. If I could rate it I would give it 4.5. It is almost five stars but because two characters don’t hold the shield like the knight I am going to give this 4.5 but really close to 5!

Mum’s note: I’m not sure I’d say the set is good value for the RRP, which is £34.99, though I’ve seen it for £19.99 online which is much more realistic. The figures are excellent – big and detailed. The accessories (shields, quite a few weapons) aren’t so small that they’ll get lost easily.

Watch the trailer for Playmobil: The Movie: