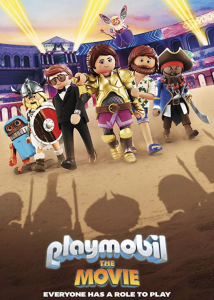 My name is Cassian and I’m 7. This is my review of Playmobil The Movie which I saw today with my mum and my brother.

A sister and brother called Marla and Charlie find out their parents have died in a car accident, so Marla has to stay at home to look after Charlie (who is 6) instead of going travelling with her new passport.

Four years later, they argue a lot and Charlie runs away. When Marla (Anya Taylor-Joy) finds him he’s in a toy fair full of Playmobil, and they end up in the Playmobil world.

She just looks like Marla but Charlie (Gabriel Bateman) is now a Viking with a beard and tattoos. It’s hard for them to walk now they are Playmobil people and Marla keeps falling over.

Charlie is kidnapped by Emperor Maximus (Adam Lambert) and Marla has to rescue him. A man called Del (Jim Gaffigan) helps her, he’s funny and weird and drives a food van. Del is trying to sell people pink hay but it makes their animals grow pink fairy wings.

It is a funny film and I liked Rex Dasher (Daniel Radcliffe) who is very smooth and is a secret agent. He likes to stop and pose in the middle of rescuing someone. He also thinks Marla is in love with him.

The little robot (Robotitron, played by Lino DiSalva) is in love with Marla because he sees hearts when he looks at her. He’s really cute.

The T-Rex was really funny.

My favourite joke in the movie was when Del had to save Marla and Charlie from the T-Rex and he shouted “Let’s make this dino sore!” and the robot went “wha wha wha” because he didn’t think it was funny.

At the end Marla and Charlie are okay and Marla has got back her adventure spirit. She says to Charlie that there are loads of adventures to come for them.

In the credits there’s more stuff so don’t go home straight away.

I love playing with Playmobil and I liked the film though the songs were a bit boring and the film goes on for a long time. I think it should have three stars but my brother thinks it should have five stars.

Playmobil The Movie is out in the UK now. Read his mum’s 3-star review.

After posting this review, Cassian and his brother were asked to review two Playmobil playsets from the film. They chose Rex Dasher’s supercar, and Emperor Maximus and the Colosseum. Read about them here.