You are here: Home / Film Reviews / Playmobil: The Movie 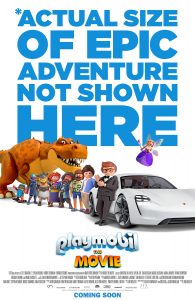 I have a soft spot for Playmobil, and not only because it’s easier on parental feet when you tread on it in the dark than arch-nemesis Lego, which like its tie-in films is considerably sharper-edged than this smooth German rival.

But while Playmobil:The Movie lacks the bite of the Lego films, this is still a colourful, engaging adventure for children.

Marla is late teens and has just got her first passport, a talisman that reappears throughout the film; Charlie is much younger. After their bereavement we skip forward four years to find Marla has given up dreams of college and backpacking, and is struggling to look after the unhappy Charlie, who runs away.

She tracks him to a Toy Fair, where they are both magically whisked into Playmobil world.

Toy Marla at first highlights the difficulties all parents can see with Playmobil, namely fixed hands and straight legs, as she tumbles over and over before working out how to move.

Meanwhile Charlie is delighted at his transformation into a blond, bearded Viking warrior and hero. (Playmobil Marla also looks incredibly mumsy, which could just be an indication of how amazing Taylor-Joy looks in anything, as toy Marla has the same dullsville outfit as real Marla.)

Creating tie-in movies for toy brands is a tall order if it isn’t to look like a cash grab, and Playmobil: The Movie certainly doesn’t have the sophistication or the adult-friendly humour that has become a mainstay of such children’s films. It is, though, a children’s film entirely aimed at children. Adults may well laugh – I did – though the jokes aren’t knowing, and don’t push the limits of family friendly acceptability. Neither are its themes remotely subtle.

I’d pitch it as most suitable for younger ones, though actually my 10 year old adored it while my 7 year old, while he enjoyed the jokes and some of the characters, was a little less gushing in his praise, finding it “too long with boring songs”.

He’s right that the songs are unmemorable, and there aren’t enough tunes to call this a musical. When real life Marla sings with 6 year old Charlie, it feels leaden; not because of Taylor-Joy’s singing and acting (she’s good at both) but because it’s unnecessary.

I’m also tired of children’s movies where parental illness or death plays out within the film in order to get to a point where the children have to be resourceful on their own. It’s very hard to get right and often, as here, feels manipulative. I’d prefer it if writers simply started the story with a family where the absence of parents or carers is simply explained in some way as having happened. There are many types of families different from the traditional two parents / two kids variety, and they become so for many different reasons (or indeed start off like that).

Playmobil world is made up of several different Playmobil environments, from the frontier town where the laid-back and irresponsible Del (Jim Gaffigan) tries to sell his magical pink hay (cue horses developing fairy wings and glitter before rising majestically into the air), to Constantinopolis where Emperor Maximus (Adam Lambert) kidnaps Playmobil figures from other games (an Amazon warrior, a futuristic alien), sending them into the coliseum to fight a mysterious creature.

With Charlie now being held by Maximus, Marla and Del must team up to rescue him; a situation not helped by Del’s ongoing debt situation to Glinara (Maddie Taylor), a strange and flirty giant slug. Luckily Rex Dasher is around to help save the day. Rex isn’t a new idea either, but he adds pizazz and oomph to proceedings.

Rex, the suave, stylish, super-spy without opposable thumbs we’ve all been waiting for, is undoubtedly the star of the show. Voiced by Daniel Radcliffe, he’s a master of disguise who fancies himself in every get-up, and is always happy to stop for a wry smile mid-action.

The message about being open to adventure whatever your circumstances is stated very clearly, though at least it means it carries as much weight as the underlying exhortation to us parents to buy more Playmobil (though really we should have a Playmobil / Lego / Action Man / Barbie / Beanie Baby crossover movie – all the children I know play with all their toys together in elaborate games, with no care about size differentials or lack of body parts).

Pacing is variable but the animation is bright and cheery (though the Meghan Trainor-voiced fairy godmother could have been more interestingly designed). Anya Taylor-Joy is a sweet and serious older sister (though by the end, instead of thinking about adventures she can have with her brother, what Marla really needs is a month away with the girls letting her hair down). The voice cast is good and I bet Radcliffe thoroughly enjoyed playing Eggsy from Kingsman, I mean Rex.

Playmobil: The Movie may not be original but it’s bouncy, entertaining and often funny. Its focus on its young audience is, to me, welcome, though as a parent if you laugh at the same things as your small offspring you’ll enjoy sitting through it a lot more. (My 7 year old and I have the same favourite joke, and there’s a cracking gag about a certain famous female singer.)

It would have been good if it had finished in a slightly less obvious way; how Marla and Charlie are finally rescued from gladiatorial combat will surprise no one who’s been watching proceedings with even half a painted-on eye open. My 10 year old (who actually loved the film, deeming it worthy of five stars) showed how quickly even young film fans can become jaded, commenting that he was tired of an idea being introduced early on then ignored for an hour before reappearing at the end to save the day.

Playmobil The Movie is out in the UK now. Read our kids’ review, from Cassian aged 7 (also three stars!)

After posting his review, Cassian and his brother were asked to review two Playmobil playsets from the film. They chose Rex Dasher’s supercar, and Emperor Maximus and the Colosseum. Read about them here.