You are here: Home / Interviews / Interview With Simon Cotton – Paul In “The Unseen” 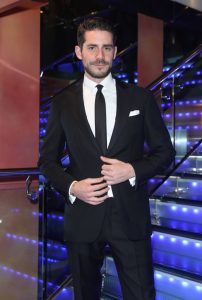 Paul, Simon Cotton’s character in The Unseen, can best be described as “handsome but creepy”. As soon as I saw him I suffered a bout of JustCan’tPutMyFingerOnIt-itis, and my creep radar went wild.

But thanks to Simon’s performance I did struggle for much of the film as to whether I was right and Paul was dangerous, or if I was doing him an injustice and he was just an over-enthusiastic helper who didn’t understand boundaries.

The Unseen is about a well-off couple, Gemma and Will, who have lost their only son Joel. As they try to recover, Gemma is stricken with amaurosis (intermittent sight loss), which we see (or don’t see) through her eyes. Paul is the first person to find Gemma when she suffers her first attack, and from then on he keeps appearing, eventually inviting them to his Lake District estate.

Simon answered some questions for me about Paul and The Unseen. Check out my interviews with director Gary Sinyor, Jasmine Hyde (Gemma), and Richard Flood (Will).

1, I thought Paul was a total creep but for quite a while I still wasn’t sure if he was evil or he simply didn’t understand boundaries. Did you base him on anyone you’ve met?

He’s definitely a creep, though Gary (the director) and I were keen to try and leave the audience as uncertain about him as possible. There’s a few moments where you wonder if he’s actually the good guy, and it was a delicate balance between unsettling the audience and not giving too much away. It was fun to play, to actually try and resist the urge to go as dark as possible…

I’m not sure Paul’s evil. I think he’s very lonely and has let his obsessive nature get the better of him. He acts as opportunities present themselves, but at the same time he plans things and is extraordinarily manipulative. Evil…not sure. Totally messed up? Absolutely. I didn’t base him on anyone I know, but Gary and I wanted to bring in an essence of Norman Bates. The smiling man, rattling around in his big, empty house…

2, Playing someone like him, is it easy to snap in and out of character between scenes? Did you take Paul home with you? Could you have a laugh with the cast and crew or did you find people giving you an increasingly wide berth on set?

I think when you are shooting such intense scenes it’s very important to leave it on set. Particularly on this film when we were all staying in the house we shot in! It is extremely unusual to do that, and despite the luxury and beauty of the location, it felt very odd to wrap for the evening and then walk down the hallway to get ‘home’.

I think as actors we all had a bit of a process to shed the day. It basically involved having really long baths and then reconvening in our pyjamas for a glass of wine and a laugh together. Sometimes it is quite hard to shake off a particularly heavy scene, but everyone got along so beautifully on The Unseen so there was never a blurring of work and reality.

3, As an actor, what are the most important factors for a happy set? (I should point out that whenever I’ve asked any actor about sets, catering is nearly always mentioned first!)

Catering was top notch on set for this one. You have never seen so many avocados and so much smoked salmon…

I think it’s important to communicate. I like a director who you can talk to as a person and as your creative influence. Gary was both. We could share a joke and talk about in depth character psychology. That felt like an important thing to be able to do on this set and because of the way we were shooting.

Thanks Simon for answering my questions. Check out my review of The Unseen here and watch the trailer.