You are here: Home / Film Reviews / Unseen, The 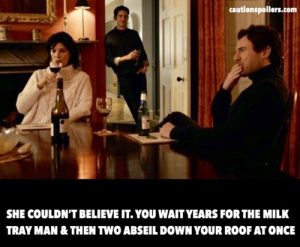 I’m always surprised there aren’t more films set in the Lake District, particularly horror – that landscape of meres, tarns and rolling hills leading to grey jutting crags and high, lonely waterfalls can turn from benign to threatening in an instant.

Factor in the area’s notoriously ropy mobile phone signal and the many isolated grey slate cottages and grand Victorian lodges, and it should be the perfect location for menacing threat and murder.

“You brought the mediocre to life” says new friend Paul to Gemma, a voiceover actress for audiobooks. He’s talking about listening to a rubbishy book she has dramatically improved with her clear narration, but it could refer to him too.

Paul is a man who doesn’t seem to have achieved much. His wife has left him, his money is inherited, but meeting Gemma has certainly brought meaning to his existence.

Paul is good-looking but smarmy, in his neat polonecks and dark jeans. He’s the kind of man who instantly sets off women’s creep radar, when men would consider him really… nice. This time, interestingly, it’s the other way round with Gemma’s husband Will unsettled and often openly hostile, while Gemma seems to think he’s ok. But is he evil? Or just one of those men who wants to help but doesn’t understand boundaries?

The Unseen (renamed Amaurosis for a US release) starts off somewhere in the well-heeled North West of England then ventures further north to Cumbria and a beautiful if rather isolated estate on the shores of Windermere.

Gemma (Jasmine Hyde) and Will (Richard Flood) are a wealthy couple with a big house and an indoor pool, but that wealth has not been enough to protect them from the shocking death of their only child Joel. In fact it’s one of the symbols of that wealth that provides the setting for an accident which could have been prevented but which also could happen to any of us.

Deaths like this bring to mind the comment about parenting made by bereaved dad Cory in the Jeremy Renner thriller Wind River: “You can’t blink for a second”.  But of course we do, because we have to. Or because we’re distracted. Or forgetful. Or that terrible sin when committed by mothers, momentarily self-interested.

After the funeral Gemma and Will are still having sex but probably because it’s the only way they can remain close; silent communication when otherwise they go through the motions of life, reminders of Joel everywhere.

The blurring, bright lights and total darkness as Gemma loses her sight after Joel’s death is destabilising and terrifying for her and for us, as we see it all through her eyes. Staggering into the street that first time, she meets Paul (Simon Cotton), a stranger, as he rushes to help and takes her to hospital. She’s sent home with pills and a suggestion she sees a therapist, as there’s no physical explanation.

But soon Paul is reappearing, popping round, introducing himself to Will, offering the guesthouse on his Lake District estate for them to get away from it all. Not get away from him though, as he has the remarkable ability to appear at the worst times, once the couple are ensconced in his rental cottage.

Within a couple of days though Will wants to go home, convinced he can hear Joel there: “Gem, I hear him. In his room. I hear him”. From our point of view Will is falling apart though in some ways his position is more comfortable, as he thinks Joel has never really gone. Gemma’s future is bleaker, as she doesn’t believe in heaven.

But with Will gone, is Gemma safer or in more danger?

It’s never really clear til near the end who is most dangerous, as lines between obsession, insanity and the supernatural blur. There were times I wasn’t sure who I wanted Gemma to run away from or to, and other times when I felt sorry for Paul, as the couple snooped on his private space.

Keeping everything claustrophobically within this group of three means it’s occasionally slightly repetitive, and once they’re in the Lake Distict a lot of the interactions are variations on the theme. But that tight grouping also means that the landscapes seem always to be neutral. Never welcoming, but never menacing, even as dark water laps the nearby shore and crags rise up in the grey sky.

The Unseen is deeply unsettling rather than scary, and the shocks that there are all surround Gemma.

Initially The Unseen certainly looks like your standard twisty thriller. Child bereavement is a familiar trope in films, and occasionally it drifts towards melodrama: dialogue about sin and punishment so often means punishing women, particularly mothers; and there’s a scene where we finally find out what happens to all those tealights we randomly buy in big bags at IKEA on every visit. But while parts of the denouement I expected, parts were a total surprise.

And the performances are terrific. Gemma is finally dragged out of her misery by an increasing threat that could be coming from either man. She’s been both oblivious to what is going on around her as she sinks, scrabbling, into muddy grief, and terrified by her vulnerability as her sight is repeatedly taken from her. It’s a movingly haunting performance from Jasmine Hyde that carries the film. I also loved Simon Cotton as Paul, whose creepiness ebbs and flows, and with it our allegiances. And Richard Flood as Will ably shows the bereaved father’s torment as he clutches at hope that can’t possibly be real.

Forcing us to see (or not see) events through Gemma’s eyes adds a thick fog to proceedings which lifts this above your average thriller.

Amaurosis will be released online and in selected US cinemas on 17 May 2019.

Watch the official US trailer for The Unseen (US title Amaurosis):