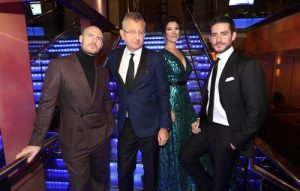 In new British thriller The Unseen, Gemma (Jasmine Hyde) and Will (Richard Flood) have lost their only child Joel in an accident.

As they struggle to cope, Gemma starts suffering intermittent sight loss, a terrifying condition which just adds to her disorientation, and which we experience through her eyes.

Paul (Simon Cotton), a stranger, finds Gemma as she suffers her first attack, and is soon intruding into their lives.

Director Gary Sinyor (Leon The Pig Farmer) answered some questions for me below about making The Unseen, how people watch films, and his experience appearing in Event Horizon 20 years ago, in his very unfuturistic glasses…

Also check out my interviews with Jasmine Hyde (Gemma), Simon Cotton (Paul), and Richard Flood (Will).

“Thematically the lighthouse would have been nice but that decision held me up for a decade!” Gary Sinyor

1, I love the Lake District and I think it is used too rarely in movies. Did you always want to set The Unseen there?

Paul’s house was – for 12 years of the development of the script – a remote lighthouse. That’s how I wrote it. I looked at lighthouses all over the world. I did recces in Puerto Rico, Majorca, Las Palmas, anywhere where there was a big lighthouse I could use for filming.

Finally we were going to shoot the film in Ireland, so I changed it to a Georgian House by a lake. Then Ireland fell through… I immediately decided to set in Manchester and the Lake District. And I quickly found the Graythwaite Estate which made the whole thing happen.

Thematically the lighthouse would have been nice but that decision held me up for a decade!

2, Gemma’s intermittent blindness is much more terrifying as we experience it with her. How did you come up with that idea?

That was the very first thing I thought of. I sat in my office trying to think of a never-been-done-before premise, something that M Night Shalamayan might come up with but hadn’t. And after two hours I just had that thought to make a film where a woman has panic attacks that affect her eyesight and also our POV. It was absolutely the starting point.

It struck me that I could make a film that literally forces the audience to use their imagination, that instead of showing too much on screen (thanks to the CGI world) I could show barely enough. That moment of deciding to make the film with these episodes was the eureka moment.

3, How did you settle on Jasmine for the role of Gemma? I thought she had that perfect mix of the self-confidence that skill and money provide, which is then shattered by the death of her son (which she blames herself for) and her blindness.

I’d worked with Jasmine is a play early in 2016 called Notmoses. It was my first play, a biblical comedy, and she played a princess. She was hilarious in it. And working with her and the other actors in theatre you get time to develop trust over a long rehearsal period which you just don’t get in film normally. So she trusted me and I trusted her, before she even read the script.

Clearly, she’s brilliant in it and I think that’s because her performance isn’t showy in the slightest. It’s absolutely credible.

She knew the part inside out and we’d gone over every line and every costume and thought process before we got to filming. I think I could count on one hand the times when I gave her a note during filming.

4, What do you find most difficult – getting to a position where you can actually make a movie, or getting it in front of its audience once it’s finished?

I love making films. ​Writing, directing, the post-production process. Everything else is painful.

5, Do you have a secret movie “dream team” – actors that you’d love to assemble together if budget was no object?

I know it sounds nuts and of course there are great actors I’d like to work with, but more than anything I want to work with actors who trust me and who I trust.

I think Brit Marling is very, very talented, she was amazing in her first film Another Earth but again it was an incredibly naturalistic performance. I’d love to go back in time and work with Al Pacino in the early 70s please.

6, How do you feel about the different ways people can watch new films? Amazon / Netflix but also the devices people watch films on? (I love the cinema but access is key and I wonder how many A-list directors and actors know their local babysitting rate and cinema ticket price.)

I watch a lot on Netflix so yes I think we all get it. It’s the way the world is. But as a film-maker, there’s nothing, nothing, I like more than to sit in a cinema with a film you’ve made with a good crowd, and know, you really know there’s a laugh coming – or you know they’re gripped with tension, you can feel it in the air, and you think “I’ve got you. I’ve got you.”

As a film-maker to feel that the audience is in the palm of your hand is just an amazing feeling. Funnily enough Twitter does some of this work, with people reacting as they’re watching.

Paul Anderson is an old mate as is his producing partner Jeremy Bolt. Thy wanted some extras to play the original crew. Vadim Jean, who I co-directed Leon The Pig Farmer with, was 2nd unit director and called me in. That was his first mistake. His second was to let me wear glasses. Who wears glasses in the 22nd century or whenever it’s set?

His third mistake was to keep going for extra takes simply because of my performance. All I had to do was nod and smile. But I’m far too self-conscious and also I was going a bit method and imagining I was so busy with my little buttons that I wouldn’t turn around immediately. I created my own motivation. I was crap.

Thank you Gary! And you weren’t crap in Event Horizon. Check out my review of The Unseen here and watch the trailer.