You are here: Home / Interviews / Interview With Jasmine Hyde – Gemma In “The Unseen” 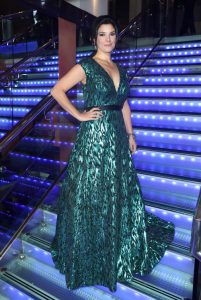 Jasmine Hyde is extraordinary as Gemma, the central character in the terrific new British thriller The Unseen. She and her husband have lost their young son, an only child, and as they struggle to come to terms with their loss she starts intermittently losing her sight – and we experience these attacks through her eyes.

Add into the mix a keen new friend, Paul, who finds her in the street when she has her first episode, and an isolated Lake District hideaway, and the scene is set for an is he/isn’t he thriller where Gemma’s attempts to protect herself are hampered by her failing sight and her difficulties in working out who is a friend and who is to be feared.

Jasmine answered some questions for me about Gemma and The Unseen. Also check out my interviews with director Gary Sinyor, Simon Cotton (Paul), and Richard Flood (Will).

1, The Unseen is a three-hander but really most of the film hinges on Gemma. Is it scary taking on a role like that?

Yes – to be honest it was! But the delight in taking on such a major role outweighs the fear. And once we got going, there wasn’t too much time to spend worrying, it was pretty full-on!

2, I found the scene where Gemma is getting changed while being watched, really, really unnerving. But how on earth do you get that kind of sense of menace across when presumably for the scene there are loads of crew members wandering around?

Well, it was a very paired-down crew anyway. But for a scene like this, it’s pretty much a closed set; so you just have sound, camera and director – and that’s it.

Everyone is very respectful and focussed though, so the tension isn’t ruined by crew being there – and the scene itself is indeed unnerving (for me too!) so I didn’t find it too difficult to feel really very unnerved!

3, Paul seems to me like one of those men that women know are creepy (and “too nice”) but men take at face value. But in The Unseen it’s the other way around, with Gemma more accepting of him and Will more hostile. Do you think that’s because Gemma is extra-vulnerable? Because women are still trained to be nice to people who are seemingly kind to us? Or something else?

Hmm – that’s an interesting question. It’s a lot to do with who Gemma and Will are as individuals. Gemma tends to be more trusting and open as a personality I think. And bear in mind that after having her life turned upside down by the tragedy of losing her son, she suffers these alarming episodes where she loses her sight – and the person who saves her is Paul.

He literally saves her when she is in her most panicked state. So she is understandably grateful. Gemma is at her most emotionally and psychologically vulnerable when she meets Paul – that’s a huge benefit for him…

4, How much preparation did you do for Gemma, or is the intermittent blindness issue one that it’s better not to prepare for?

I researched the condition – Amaurosis – on the internet (what would we do without the internet?!) which was useful because I needed to know how the episodes manifested themselves. I have experienced similar blackouts in the past myself so that helped!​

Thanks Jasmine for answering my questions. Check out my review of The Unseen here and watch the trailer.