You are here: Home / Interviews / Interview With Richard Flood – Will In “The Unseen” 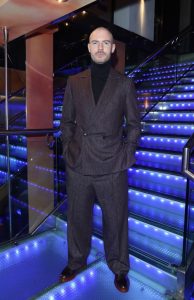 Richard Flood (Will) at the premiere of The Unseen [Getty Images]

Richard Flood plays Will in new British thriller The Unseen. He’s lost his son, and now has to deal with his wife Gemma intermittently losing her sight, and their new friend Paul, who is muscling in on their grief.

Will’s own coping mechanisms aren’t working – he starts hearing their dead son Joel in their home, but is it psychological or something more supernatural? And as Will breaks down just what is he capable of?

Richard answered some questions for me on his character Will in The Unseen. Also check out my interviews with Jasmine Hyde (Gemma), Simon Cotton (Paul), and director Gary Sinyor.

“It’s important that the audience will empathize with him but also that they are never quite sure what he’s capable of, good or bad.” Richard Flood

1, I found The Unseen really unsettling to watch, and couldn’t trust my own instincts – for a long time I wasn’t sure if I should be rooting for Will or hoping a terrible accident would befall him. He’s a victim, but he’s also a potential threat. What were your thoughts on him when you first read the script?

When I first read the script I suppose I was looking at Will more from the point of view of how he was dealing with their terrible tragedy and trying to come to terms with what that might feel like.

It wasn’t until I spoke to Gary that we discussed Will as needing have a sense of danger about him, that he could potentially be dangerous to himself or others. It’s important that the audience will empathize with him but also that they are never quite sure what he’s capable of, good or bad.

2, How much back story do you as an actor get to create for a character like Will? He is obviously well-off and successful. And as an actor do you think forward to what happens to a character later on? Whatever the eventual ending, Joel is never coming back which is pretty bleak.

Personally I like to build quite a big backstory, and include as many little details as I can. But this is mostly for myself. It makes me feel more comfortable when I come to set as I feel comfortable in the character then and that leaves me free for the scene to go wherever it goes, to be able to be as in the moment as I possibly can.

Although I have read the script and know what happens, during the shooting of an individual scene I just try to remind myself of what has just happened to my character and take it from there, no plan, no anticipation.

3, Losing a child destroys many relationships, but it’s also quite a common plot device in TV and movies. How do you approach a scenario like that and make sure it’s treated sensitively while still making it work dramatically?

My approach to this material is really the same as any other. I am trying to be as truthful to the material as my imagination will allow me, then it’s about trusting the people you are working with and ultimately the director who will decide how the material is dealt with in the larger sense.

I just do my little bit as best I can and then let everyone else do their bit as best as they can.

Thanks Richard for answering my questions. Check out my review of The Unseen here and watch the trailer.