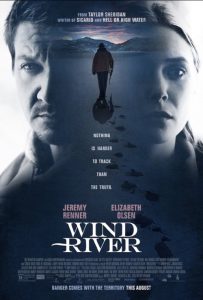 Murdered women in movies are so often just a victim or a body, as the heroic investigator tracks down their killer. Actresses lie perfectly still, faces frozen in a death mask of fear, as other characters walk around them and talk over them.

In Wind River, Natalie, a young Native American woman, has been found dead after a horrific sexual assault, and while the movie is a very satisfying crime thriller (I won’t deny I was pleased with the ending) it is also about giving a woman back her name and her dignity – a woman who was, as Cory says later in the film, a warrior in her attempts to survive.

Natalie (Kelsey Chow) is only 18 when she dies. Cory (Jeremy Renner), the hunter on the Wyoming Wind River Reservation, finds her frozen body way out of town after following a trail of footprints and blood. The FBI sends Jane Banner (Elizabeth Olsen) to review the crime and the crime scene.

Natalie had a white boyfriend, but her father Martin (Gil Birmingham) wasn’t sure who he was, something that astonishes Jane when she questions him. Much later Cory explains to Jane about his own daughter Emily’s death three years earlier at 16. Best friends with Natalie, Emily was partying while Cory and his wife Wilma were out of town, and was found dead the next day. Two terrified young women, three years apart. “You can’t blink for a second” say Cory to Jane, trying to explain what it is like being a parent.

Cory and Wilma are no longer together and their conversations are peppered with the sadness, silences and slight snippiness you see in couples who have separated yet still retain memories of shared happiness and pain.

An expert tracker, Cory spends his days in a white snowsuit shooting wolves and mountain lions that attack livestock on the reservation. He’s still friendly with his in-laws, and it’s while looking for an animal which has attacked a steer belonging to Wilma’s father that he finds Natalie.

Jane is both massively unprepared for the weather and so moved by what’s happened to Natalie that she fights for her from the start. I’m not sure she’s a rookie though – does empathy for a victim have to mean that? For the FBI to send a team out, Jane needs homicide on the death certificate. But Natalie died of exposure trying to escape so the local medical examiner refuses, despite Jane’s pleas. (Though when it comes to Jane vs the weather, we didn’t need the shot of the FBI agent’s lace thong-clad bottom as she changed into borrowed thermals. It shouldn’t surprise anyone that you can still wear pretty knickers under long-johns!).

I hate the idea that men can only empathise with women’s fears of violence by referencing their own mothers, partners and daughters, especially if something awful has happened to them too. Though here Emily and Natalie were friends and it does work, as Cory tries to give advice (too soon of course) to Martin on the eternal co-existence of grief and memories.

And while there’s an undeniable bond between Martin and Cory because of what they are enduring (“Take the pain, Take the pain, Martin. It’s the only way to keep her with you” Cory tells him) an attachment also quickly grows between Cory and Jane, an unspoken agreement to find Natalie’s killer and deliver some sort of justice.

The Wind River Reservation is beautiful but brutal, and far more than a backdrop. Expanses of white snow are scored by tracks or blood. Mountains loom into the sky. Trees tower above, branches weighed down with snow. It isn’t a static landscape either, as snowstorms lash branches or motorised sleds weave through trees at 80 miles an hour. The problems on the Reservation particularly affect the young, with drug use rife, and Ben, the Tribal Police Chief (Graham Greene), points out that for many, prison is a rite of passage to look forward to.

I’m wary of films where white people tell other people’s stories (Martin’s comment “Why is it that whenever you people try to help us, you always insult us first, huh?” should reverberate across Hollywood). Though here Cory’s actions make sense, as once society had failed Natalie over the death certificate, by taking on the mantle of deliver of justice Cory takes that responsibility away from her shattered family. Jane is an outsider but in some ways Cory inhabits that tricky space of being neither outsider not fully accepted (Wilma is Native American and their children biracial), something highlighted by his profession, out alone on the mountainside.

There’s a big tonal shift moving Wind River away from your everyday snowy crime thriller as Jane, the police and Cory close in, though it happens in stages from growing unease to violence. The flashback (which I wasn’t expecting) shows the rape of Natalie and horrendous violence – but it also shows us the real Natalie, warm-hearted, funny, committed and in love, before it explodes into horror. It’s heartbreaking and then deadening as she tries to escape, but upsetting as it is to watch, it’s essential to the film (not something I say often about scenes like this).

The metaphors around Cory are rather obvious – he hunts predators! But Renner imbues him with levels of empathy and dedication which go beyond simply his response to his own grief in these horrific new circumstances. He does tend to talk in aphorisms though: “wolves don’t kill unlucky deer, they kill the weak ones”, and I hardly wrote down any key quotes as I soon realised I’d be scribbling most of his dialogue. Even so, quite often I had no idea what he was getting at, as he stared intently at the snow.

Gil Birmingham, so good in 2016’s Hell Or High Water which Sheridan also wrote, is wonderful again here – dignified but avoiding that stoical parent cliche by not being at all forgiving. I liked Olsen a lot. Her Jane is matter of fact and sometimes a bull in a china shop, but she’s also tenacious in a very masculine world, and resolute about getting Natalie some kind of real justice.

Buy Wind River on DVD or Blu-ray from Amazon UK

Buy Wind River on DVD or Blu-ray from Amazon.com