You are here: Home / Film Reviews / A Christmas Horror Story 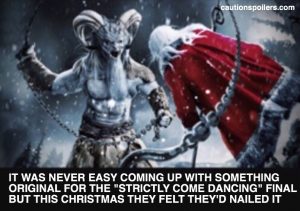 Bailey Downs is one of those towns you really, really want to keep away from.

Bailey Downs had two horrific murders exactly one year ago in the high school basement.

But worse than that, their nighttime DJ on their local radio station is William Shatner.

Talk about bad chi in Bailey Downs. Like Albert Square in Eastenders where everyone who moves there has an utterly miserable time and then dies in a fire caused by faulty fairy lights on Christmas Day.

Or Bristol, the setting for BBC hospital dramas Holby City and Casualty which seem to have a large scale humanitarian disaster every other week. KEEP AWAY FROM BAILEY DOWNS ESPECIALLY AT CHRISTMAS.

Now, a year to the day later on Christmas Eve, several stories involving Bailey Downs’ very unfortunate townspeople intertwine into one terrifying night of horror, as they are subjected to possession, ghostly nuns, changelings, zombie elf attacks and even the ultimate Christmas battle – between Father Christmas and our old friend Krampus.

A Christmas Horror Story is considerably better, and creeper, than many Chrisploitation movies (is that even a word? It is now). The ending is genuinely shocking, and there are plenty of other scares along the way.

The stories are properly intertwined, adding to a sense that escape is impossible. There are two great performances: from Oluniké Adeliyi as a mother whose son starts acting strangely, and from George Buza as Santa himself in a particularly chilling episode.

And let’s face it, Shatner is always good for some enjoyably knowing self-mockery.

There are four spooky tales, all bleeding into one another. The benefit of these different stories of course is that several different monsters can appear without it turning into a demonic version of The Royal Variety Performance.

Molly (Zoe de Grand Maison, one of the best names I’ve seen), Ben (Alex Ozerov) and Dylan (Shannon Kook) break into their school – an old convent – and head to the basement where the murders took place a year previously. It’s a rather eerier and more effective story than its evil nuns, possessions, sex and death might suggest.

Police officer Scott (Adrian Holmes) and wife Kim (Oluniké Adeliyi) chop down a Christmas tree in some private woods and lose their young son Will; though they find him again, something’s different. Is he Will? If not, where is Will and can they get him back?

Caprice (Amy Forsyth) travels with her brother Duncan (Percy Hynes White) and squabbling parents to Aunt Edda’s house, where Duncan breaks an ornament which raises Krampus, the evil “reverse-Santa” Shadow of Christmas, who chases down her family as they try to flee. (Krampus is known for Old Testament-style overreaction – check out what he gets up to in his own movie here.)

The fourth segment is about Father Christmas himself (George Buza), living in a rather dark and dismal compound with his wife and the toy-making elves. Weary and rather scruffy, with long matted grey hair and heavy old cloaks, he’s kind but not your usual cheery faced St Nick. It looks positively medieval as the wind howls and the snow whirls. But worse is to come: the elves are infected, and soon rise up as zombies.

The different stories vary in their effectiveness, with the final segment the most startling, memorable and interesting. But taken as a whole this is a thoroughly entertaining movie for those who consider the Hallmark Christmas schedule to be the work of the devil rather than Krampus.

What strikes me about A Christmas Horror Story, and some other scary Christmas offerings, is how unfair they are; in the season of goodwill people are targeted by malevolent beings for the most minor of transgressions. I know these are horror films but, you know, it’s Christmas!

Still, if you’re being needled by everyone’s fake festive bonhomie, and you feel the need for some darkness to snuff out the twinkly candlelight, you could do a lot worse than this film. Unlike those piles of beautifully wrapped presents of our childhoods, it delivers considerably more than it promises.

buy/ rent a christmas horror story on vod or buy the dvd or blu-ray from amazon.com

Watch the trailer for A Christmas Horror Story:

BACK TO BAR HUMBUG INDEX