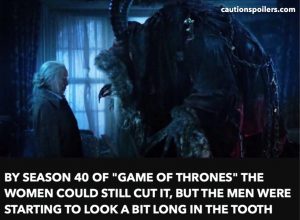 Mislay your Christmas spirit and Krampus himself will come after you – helped by murderous elves, killer gingerbread men and terrifying toys.

His name may sound like a branded paracetamol for period pain but actually it’s much more agonising than that, as this evil “Shadow of Christmas” punishes you for not being cheery enough.

Talk about forcing jollity on people. He sounds like a demonic Butlins rep.

Christmas is all about light and shade, and so are Christmas stories. But Krampus takes this to extremes – it’s a very old testament kind of monster, where fairness doesn’t really get a look in. One of those demons when you catch yourself shouting “but that’s not fair!” even though your watching a horror film about armed gingerbread men.

Krampus isn’t a particularly scary film but its murderous creatures are enjoyably determined. It’s perfect for watching one dark December evening after losing your own Christmas Spirit: when you’ve run out of sellotape halfway through wrapping the presents and then realise someone’s eaten all the purple ones out of the tin of Quality Street.

He is desperate to continue all the family’s Christmas traditions, but everyone is arguing; particularly when his mum’s sister Alison, her husband Howard, and their three brattish kids plus baby, pitch up to stay for Christmas.

Tearing up his Christmas letter to Santa and throwing it into the wind, the fed up Max doesn’t realise he’s setting in motion a visit from evil Krampus and his horrifying team. Soon a terrible blizzard blows up. And oh yes the power lines are down! (I love writing that sentence in horror film reviews. I need to have it as a keyboard shortcut.)

Naturally everyone makes silly decisions. Beth walks to her boyfriend’s house in the blizzard but is chased by a terrifying creature. Tom and Howard go to look for her, and at her boyfriend’s house they find chaos, destruction, and a gingerbread man pinned to the fridge with a large knife. Oh and big hoof marks from an animal that walks on its hind legs.

Meanwhile, Tom’s German mother Omi (Krista Stadler) is well aware of what’s going on, having seen first hand as a child in Germany what happens when you lose your Christmas spirit. Yet another miserable, poverty-struck Christmas led to Omi losing hers; and in retaliation Krampus dragged her family and village to Hell. Omi was saved and left with a bauble with the name Krampus on it to remind her forever of their fate.

Gradually Max’s extended family are picked off, one by one, two by two, three by three. Their tormenters include Gingerbread men Lumpy, Dumpy and Clumpy, getting their own back on centuries of humiliation involving raisins for eyes and having their heads bitten off.

Omi’s loss of Christmas spirit when she was a child living in poverty sounds totally understandable – my children lose it about half an hour into Christmas morning when they realise Santa has yet again taken the opportunity to put new socks and underpants in their stockings – yet she loses her home, family and indeed entire village to the fires of Hell.

And Saint Nick clearly gets Krampus to do his dirty work for him. Then again folklore and fairytales are usually pretty unmotivating for the poor, and for women.

The scares are daft but rather effective. Manic dolls that come alive, gingerbread men with a mammoth chip (presumably a chocolate one) on their shoulders, killer elves. Krampus itself is rather sinister though it does look like a cross between someone from Game of Thrones and Black Philip from The Witch.

Aunt Dorothy was my favourite character. When forced to look after the children for a few minutes during the chaos (“why me? I never liked kids. Even when I was one” she says petulantly), she teaches them to make alcoholic Snowballs. She also blocks up the toilet, and after the mayhem has subsided announces “I haven’t felt this hungover since the Pope died”.

I suppose Krampus does bring the family together, sort of, during their night of mayhem. And afterwards too – Tom and Howard have never got on but having a drink after the events in the blizzard, Howard finally apologises: “I just want to say I’m sorry for thinking you’re such a spineless dick all these years”.

Christmas spirit is restored. But Krampus is still waiting, and watching.

buy / rent krampus on vod or buy the blu-ray or dvd from amazon.com