You are here: Home / Film Reviews / The Witch 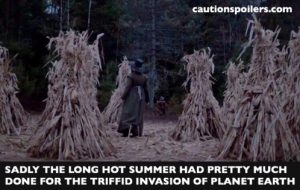 A missing baby, an evil woman lurking in the woods… as a straight-up horror film about witchcraft The Witch is frighteningly effective; though it’s also about the descent into psychological warfare within a previously loving family.

Even with its living breathing monsters, it can still be interpreted as solely an allegory birthed from over-fertile imaginations; though whichever view you favour, the film’s sense of brooding, lurking menace is exceptionally terrifying, precisely because director Robert Eggers combines it with ordinary family life.

We are in New England in the 17th Century and a family – father William (Ralph Ineson), mother Katherine (Kate Dickie), older daughter Thomasin (Anya Taylor-Joy), son Caleb (Harvey Scrimshaw), and young twins Mercy (Ellie Granger) and Jonas (Lucas Dawson) – leave their Puritan plantation under threat of banishment because of a difference in opinion over the interpretation of the New Testament. (so far, so Twitter.)

Travelling to some brushland, they build their new home. It’s striking the sheer amount of labour needed to keep a family going: chopping wood, hunting, building, washing.  And praying, though sadly in this movie the proverb ‘the family that prays together stays together’ is rather disproved. Katherine gives birth to Samuel, one of the most gorgeously chubbily scrumptious babies ever to appear on film. But while in the care of Thomasin he’s snatched by a witch lurking in the nearby woods.

As they struggle to deal with their loss, God is the only one the family cannot blame, and the irony is that with their religious beliefs there never actually needs to be a witch. The family still turns on each other, looking for a scapegoat. Katherine struggles to keep going without her baby. Then her treasured silver cup, the only pretty thing she owns, goes missing. Hunting in the woods, young Caleb stumbles upon a hovel and a beautiful woman, then disappears. But the farm is no haven from evil, as the twins are talking to their large goat Black Philip, and he apparently is talking back to them.

God is everywhere and nowhere in The Witch, their belief in him absolute.

Despite the sparseness of Puritan life, this is a family drunk on rich symbolism – the human imagination needs an outlet somewhere. Considering their clean but dull grey dresses, brown britches and simple lifestyle, it’s no coincidence that the myths of witchcraft to which they are beholden add an unctuous richness. The abundantly proportioned young woman who tempts young Caleb in the woods; Katherine’s silver cup; the goat whose milk turns out to be blood; Thomasin’s elevation to womanhood when her periods start. There’s even an apple produced after a meeting with the witch and if that doesn’t symbolise to you the evils of women in the bible I don’t know what would satisfy you. You can see that for the credulous and vulnerable such beliefs would actually add some excitement to a dull, hard life.

The myths of witchcraft litter this film. The ugly old crone who can temporarily make herself beautiful enough to tempt even a true Christian boy, but not for long as her wickedness precludes her from being permanently beautiful. The hare running away in the woods (witches were believed to be shapeshifters who could turn into animals, particularly hares). And  being in thrall to the devil himself, in this case the goat Black Philip. And of course stolen babies.

The children’s performances are beautifully judged, and show quite clearly how everyday family life and ordinary childhood continue even as myth and accusation start to swirl.

Anya Taylor-Joy as Thomasin encapsulates that particular air of womanhood that arrives as childhood ends. Ellie Granger and Lucas Dawson, as twins Mercy and Jonas, are impressively natural; inquisitive with that childlike busybodiness, chattering away in northern English accents, laughing and giggling then making accusations of witchcraft. Harvey Scrimshaw as Caleb has several difficult scenes where he may be possessed and is utterly believable in his beliefs.

It’s a muted yet beautiful movie. Clothing in greys, creams and taupes; with the woods having that dull but open look as tall silver tree trunks soar to the heavens, just enough light getting through to the forest floor. Everything is rather dour, but very clean; cleanliness being next to godliness for Puritans, no doubt.

While The Witch could be seen as both a psychological and a satanic story, it works best to think of it as a mix of the two. The witch is real, but that doesn’t mean the family won’t respond in the way that they do, making things worse for themselves with accusations as they flounder (“you reek of evil” says Katherine to Thomasin, her own daughter). The sense of ugly menace grows gradually but inexorably – banal remarks are misconstrued, prayer isn’t working – with the family clearly able to destroy itself with no help needed from any sorcery.

Stories from the past are often retold to stop history repeating itself, though sadly despite the repeated use of witches and witchcraft in movies I don’t see any drop-off in the demonisation of older women by people who are no different to the finger pointers in funny hats 500 years ago. Self righteousness remains.

Still, although films about the victimisation of older women living alone and running their own lives are a hard watch, at least it means an over-40s actress gets a job.