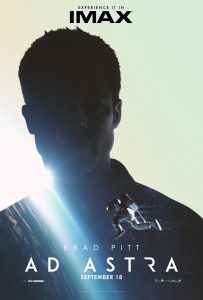 Warning, some spoilers: so if you don’t want to know there are killer space baboons, leave now.

What if, instead of finding intelligent life out there, we have to accept we’re stuck with slightly dim life down here?

The urge to push forward is strong, though it’s often exploration as a deflection, because there’s something here that we don’t want to deal with.

And the problem with successful exploration is that we may not like what we don’t find. It’s like looking over the head of a droning party guest for someone new coming in, seeing the door firmly closed, and having to brace oneself for another hour’s talk of hard Brexits.

In James Gray’s Ad Astra a search across the solar system for answers ends up back where they started, though at least astronaut Roy McBride (Brad Pitt) has worked through his issues about his dad by the time he gets home, and it actually feels like home.

Father-son relationships are always good fodder for further exploration. So many men either eulogise their fathers or live in terror of turning into them (sometimes both).

Intimate, vast and focussed, Ad Astra is a big budget but low-key movie, and like the most relatable space movies speaks eloquently about our flawed selves: our inability to learn, our tendency to use this bigger, emptier, star-spangled canvas simply to expand our Earth-honed stupidities.

And like lots of movies that involve taming the heavens, it’s also about our reliance on religion and the death of God, as Clifford McBride crosses billions of miles of nothingness to find only nothingness.

There’s a lot about masculinity too – Clifford (Tommy Lee Jones) leaving his family to become a national hero, escaping the daily drudgery of parenting for universal acclaim. Apart from the Virgin Mary, whoever became an icon for staying home and bringing up a son well?

Roy is looking for the real man beneath the medals and myths; though he and SpaceCom, the agency which sent Clifford to look for alien life as part of the Lima Project when Roy was only 16, created the hero facade when the ship disappeared somewhere off Neptune.

Now Roy speaks and acts like an automaton. He’s matter of fact, his incredibly low heart rate almost as legendary as his father. But he’s also repressed (my god, so repressed!). “They seem at ease with themselves. What must that be like,” he says in his low-voiced narration about his fellow travellers as a shuttle takes him to Mars. With a failed marriage behind him, his demeanour can only be described as po-faced.

Poor Roy. At least his mad, bad dad, discovered alive and hiding behind Neptune while threatening the solar system with an attack of antimatter, sounds like he’d be interesting at a dinner party – even if I wouldn’t leave him alone in the kitchen while everything was bubbling away on the hob.

SpaceCom has found that electrical surges hitting Earth, which have already killed tens of thousands, are coming from the spot where Clifford’s ship was last known; they carefully explain this to Roy, who matter of factly is appalled that the nation’s hero is being defamed in this way.

Still, he agrees to go to Mars to send a pre-written message to his dad, in the hope it will stop him. Travelling with him will be Colonel Pruitt (Donald Sutherland), a retired astronaut and friend of Clifford’s, whose wisdom, warmth and humour reinforce just how chilly Roy is.

In this near future, space travel is heavily commercialised. En route to the moon Roy travels in a commercial shuttle where everything has to be paid for. It’s Virgin Galactic with shades of Ryanair (though to be fair they’ve kept the free hot towels). On the moon there are families on holiday taking photos, space pirates whizzing around the lunar surface in buggies, and squabbles between countries over who owns what.

Cinematographer Hoyte Van Hoytema (also DoP on Interstellar) casts a chilly enchantment, helped by an extraordinary use of colour. A medical room, with its white equipment and orange easy chairs, harks back to the stylised 1960s vibe in 2001: A Space Odyssey. On the moon, the buggies are white against the grey landscape and black sky, helmet visors glowing orange. When Roy gets to Mars even inside the base it’s red, but cold. It’s here he meets Helen Lantos (Ruth Negga), whose suppressed rage at what happened to her parents, who were also on Clifford’s voyage, shocks Roy out of his self-absorption.

SpaceCom isn’t what it seems though, and Roy has to stow away on a ship tasked with finding Clifford and destroying his ship. It’s like father like son as he is forced to kill the crew, knowing Clifford felt obliged to murder his colleagues when they insisted on going home.

Brad Pitt is exceptional in a role that could easily have come across as “middle aged white man has midlife crisis in space”. Listening to other people go on about their parents is akin to looking at their holiday photos, yet Roy’s internal conflicts as he dismantles the heroic carapace built around his dad show us Pitt at his best.

Ad Astra is certified 12A in the UK. Since I started taking my 10 year old to see those films we’ve had hits and misses: Jumanji: Welcome To The Jungle was a warm-hearted delight; Holmes & Watson has a long scene about onanism. He loved them both, of course. With Ad Astra genre-fied as intelligent sci fi, I was worried he’d be bored watching a 40-something man come to terms with his dad’s betrayal, but he adored it and declared it – rather loudly I’m afraid – “five stars”.

It’s helped by the action scenes, which are well-spaced and add tension and thrills. The film opens with Roy facing a long jump down when the antenna he’s perched on, which reaches from Earth to the edges of space, is hit by one of the electrical surges.

The crazed, teeth-baring space baboons help too, but while my son has admittedly just emerged from a cosmological obsession (he spent the walk home explaining antimatter to me) he’s probably not the only kid who will get a lot out of this.

I loved the wit and thrills of The Martian, adored the bottom-numbing, sprawling Interstellar. I was dazzled by 2001: A Space Odyssey, but found the Soderbergh / Clooney Solaris as dull as dishwater. I haven’t seen The Wizard Of Oz in decades, but immediately thought of the lifting of the curtain to reveal an ordinary man behind as Clifford’s heroic sheen dissolved. Accepting we are all there is, forcing ourselves to look inward, is bravery. Being content on Earth, at least for now, is less giving up and more growing up. I guess there’s no place like home.

Read our kids’ review of Ad Astra by Ashton, aged 10