You are here: Home / Film Reviews / Martian, The 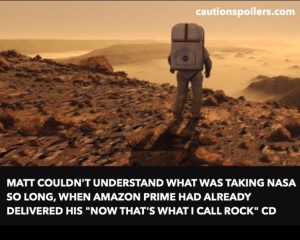 Okay, it has something for everyone if you like Matt Damon. (I can only imagine Ben Affleck’s jealousy when he saw it. Like when your best girlfriend loses 10lb and is suddenly thinner than you. You’re delighted for them! Oh yeah. Now die bitch, die.)

It’s hugely entertaining, and gripping. But ultimately it’s a story that examines the effects of isolation and loneliness, the ingenuity and bravery of mankind, and modern science. How do they interact within a setting as unchanging and inhospitable as the martian surface?

What happens when you decide to spend millions rescuing one person, because of what he has come to mean to friends and strangers alike?

In films that rely so much on one character, with no one to interact with, it’s always tricky to find a way to get across what’s happening without turning it into a two hour French mime or breaking down that fourth wall with endless chats to camera.

Castaway went with the human option – giving Tom Hanks a basketball called Wilson to talk to (resulting in a heartbreaking scene when a little leather ball with a smiley face drawn on it bobbed off across the Pacific into the distance).

The Martian is a film as much about emotional resilience when faced with that unasked for, and possibly inescapable solitude; but the technology needed to get there and live means he can video diary to his heart’s content.

It all kicks off on Mars where the Ares III mission crew – headed up by Commander Melissa Lewis (Jessica Chastain) and including botanist Mark Watney (Matt Thingumy) – have to cut short their work and leave the planet when a storm threatens them.

However Watney is struck by debris and, with his spacesuit no longer transmitting signs of life, is left behind. The rest of the crew head back to their orbiting ship Hermes and start the long journey back to Earth.

Meanwhile back on Mars, Watney has woken up but is short of oxygen. He makes it back to their base, where he has to perform surgery on himself. That’s his immediate problems sorted, and initially it doesn’t seem too bad. He’s got the planet to himself, with no likelihood of anyone popping in unexpectedly if he’s up to something he shouldn’t, and well I think we all know what he’ll end up doing don’t we. Yes, naked disco dancing! And then eating all the remaining six-person rations in the giant fridge.

Sadly he works out that the next mission visit will be the Ares IV which is arriving in four years’ time. Not only that, it’ll be 3200 km away from his current base. His food is likely to last about 300 days, so its time to grow his own.

In the end a mixture of Martian soil, water and his own organically certified poo is all that’s needed, and Operation PooTato is under way, where you could say Watney “shits the science out of this”.

Back on Earth, and on Hermes, everyone thinks he is dead. It’s only when junior NASA team member Mindy (Mackenzie Davis) checks the photos they’re receiving from Mars and sees evidence of movement that it dawns on NASA that he is still alive.

Legally they have to release the pictures. But while the world knows Watney is up there, still breathing, NASA head honcho Teddy Sanders (Jeff Daniels, doing his slightly-more-ambivalent-than-Morgan-Freeman-but-still-basically-good-head-of-something-or-other thing) refuses permission to tell the Ares III mission crew.

The Hermes flight director Mitch (a gruffly believable Sean Bean, who is some shock casting does not die), believes strongly that the crew should be told. It isn’t until NASA make contact with Mark that they agree to tell them.

Sadly an airlock malfunction results in the destruction of the potato crop, and NASA’s plan to send a probe with a food drop fails with an exploding rocket. Honestly at this point it’s starting to look like “The Revenant On Mars”.

This is science with a thick coating of terror. Will the sums add up, as Watney considers propelling himself into space protected only by his boilersuit and a flapping tarpaulin (basically less than I’ve got to protect me when I pop to the supermarket in my denim jumpsuit and snugly zipped M&S raincoat)?

Does Matt/Mark make it off the planet? Well I managed to get to Waitrose and back and only got a bit wet so there’s a clue.

Ultimately this is Damon’s film. Watney may retain his dry send of humour but his sense of isolation and increasing dread is clear. Especially as he knows if he dies it’ll be to the strains of Turn The Beat Around, as Melissa only brought disco music with her. And Watney, in jokingly declaring himself the “best botanist on Mars”, does himself an injustice as he’s clearly one of the best botanists in the solar system. (Well of the ones we know of – sorry, showing my Earth Privilege there.) He really does science the shit out of the situation and I learnt a lot, and not just about potatoes.

Although it’s The Matt Damon Show most of the time, the scenes on Hermes and back at NASA are real ensemble pieces. This is a hugely entertaining movie, and despite its 135 minute running time it doesn’t feel as long as it is (or maybe I’m just still on Mars days).

I’m no techie but I wasn’t bored for minute, even when they were explaining slingshotting each other back to Mars using the Earth’s gravitational pull or some such gubbins.

Watch the trailer for The Martian: